It was published in The Kathmandu Post, 23 May 2016.
Unspent budget

The government is unveiling budget for fiscal year 2016/17 at the end of May, one and a half months prior to the start of FY2017. The expectation is that it will give the government and bureaucracy adequate time to finish approval of programs and projects and subsequently speed up project implementation, resulting in higher spending at the end of the year. This is an important step to create the enabling environment for accelerating spending. However, policymakers should not lose sight of the other problems affecting spending capacity.

The under-execution of capital budget is a chronic fiscal issue that is intertwined with politics, bureaucratic competence, management capability of contractors, governance and the maze of Acts and policies that are hindering timely, faster and efficient spending. The existing ecosystem for capital budget execution is obstructing, rather than facilitating, timely spending.

For a low income economy like Nepal that is struggling to close the infrastructure deficit, the low capital budget allocation and then dismally low absorption rates give a sense of the enormity of the problem. While the planned capital spending averaged 5.5% of gross domestic product (GDP) in the last five years, actual spending averaged just 4% of GDP. In FY2016, planned capital budget is around 9.3% of GDP (Rs208.9 billion), of which only 23% was spent in the first 10 months. A substantial portion of the Rs91 billion allocated for post-earthquake rehabilitation and reconstruction remains unspent. 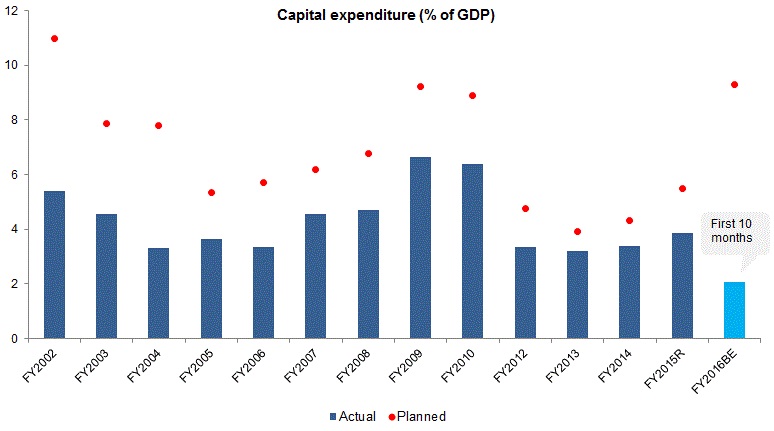 It is not hard to notice three patterns here: (i) planned capital spending itself is lower given that Nepal needs to invest an estimated 8-12% of GDP annually in transport, electricity, water supply, solid waste management, telecom and irrigation to close the infrastructure gap; (ii) capital budget absorption capacity has been chronically low (about 75% of planned budget) for a long time; and (iii) persistent bunching of spending in the last few months of fiscal year (about 45% capital spending occurs in the last month and 65% in the last three months), raising red flags over not only low spending, but also the quality of spending.

Additionally, capital spending is far lower than recurrent spending, which stands at around 16% of GDP. Higher capital spending not only creates the fundamental for growth to take off and helps to usher in a meaningful structural transformation, but also boosts immediate demand for construction materials, increases production of intermediate goods, and generates jobs. It includes spending on civil works, building, plant and machinery, land, vehicles, furniture and fittings, etc. The growth jolt from recurrent spending is not as strong as that from capital spending. Recurrent spending consists of grant to local bodies (includes some capital spending as well), wages and salaries to government employees, interest and subsidy payments, social security, and operation and maintenance.

Politicians and senior bureaucrats lament the low capital spending and openly admit the chronically low absorption capacity, but still seek higher share of budget each year. In FY2017, the size of budget will likely be higher than Rs819 billion appropriated for FY2016 despite the fact that the existing mechanism won’t be able to spend it in full without rectifying the distorted ecosystem governing project selection, spending approval at the center and spending pattern at the local level.

Six major issues plague capital spending in Nepal. First, structural weaknesses in project preparation and implementation remains unresolved. Barely any substantial homework is done before the inclusion of projects and programs in budget, leading to allocative inefficiencies to begin with. For instance, projects of all nature (complex, large or piecemeal and of varying timeframe) are included in the budget on the basis of political priorities and not on economic imperatives (which requires a strong pipeline of projects ready for implementation subject to finance, knowledge and technology availability). Furthermore, these are usually not in sync with medium-term expenditure framework and the medium-term plans.

Fifth, high fiduciary risks in project implementation in suburban and rural areas when projects are implemented through local government having limited human resources and administration capacity not only delays spending, but also makes it inefficient. The funds allocated to parliamentarians to spend in their constituencies fall in this category.

Finally, political instability and interference both at planning and operational levels hinder timely completion of projects. For instance, the recurring political meddling in the duties of the board of Nepal Electricity Authority and Kathmandu Upatkaya Khanepani Limited are two classic cases. Furthermore, unfruitful interference and inconclusive governance oversight by various parliament committees and Commission for the Investigation of Abuse of Authority disincentivize honest and committed public officials and contractors.

All of these problems cannot be solved overnight. However, few immediate steps could go a long way in mending this chronic problem. Since there will always be political element to program selection and inclusion of some pork barrel projects, this issue pops up in every budget cycle. However, the sector ministries, NPC and MOF could work on a common platform to improve allocative efficiency by sanctioning enough funds (with the flexibility of multi-year contract) for projects that are implementation-ready. Furthermore, monitoring and evaluation at all these government agencies could be made more effective than just clicking check boxes during review sessions. Finally, strong leadership especially by joint secretaries, who are normally project directors, secretaries and ministers is essential to effectively administer and complete a project.

Else, capital budget and the funds allocated for post-earthquake rehabilitation and reconstruction won’t be timely and efficiently spent.

Posted by Chandan Sapkota at 1:55 PM