The global trade landscape is changing along with the development of sophisticated global value chains (intra-firm or inter-firm, regional or global). The gross trade figures hide the real value addition that takes place while a good or service is produced in a country or across countries. The WTO already has a website that details value added trade. Here is an earlier blog post based on it. Also, here is more on why value added is a better measure of trade.

In its latest report on global value chains, the UNCTAD argues that 80% of global trade takes place in value chains linked to transnational companies. It states that as much as 28% of gross exports is actually double counted due to non adjustment of value addition during each production process scattered across many countries. It also shows that production and trade of goods and services are linked at some stage.

Excerpts from the latest UNCTAD report:

GVCs make extensive use of services. While the share of services in gross exports worldwide is only around 20 per cent, almost half (46 per cent) of value added in exports is contributed by services sector activities, as most manufacturing exports require services (such as engineering work, software development, and marketing) for their production. In fact, a significant part of the international production networks of TNCs is geared towards providing services inputs, with more than 60 per cent of global foreign direct investment (FDI) channelled to services activities. By comparison, 26 per cent of FDI goes to manufacturing and 7 per cent to the primary goods sector. The picture is similar for developed and developing economies.

The majority of developing countries, including the poorest, are increasingly participating in GVCs. The developing-country share in global value-added trade increased from 20 per cent in 1990 to 30 per cent in 2000, and is over 40 per cent today. Again, the role of TNCs is critical, as countries with a higher presence of FDI relative to the size of their economies tend to have a higher level of participation in GVCs and a greater relative share in global value-added trade compared to their share of global exports.

GVC links in developing countries can play an important role in economic growth. Domestic value-added – that is, an improved capacity of an economy to produce a broader variety of goods, and goods of greater complexity – resulting from GVC trade can be very significant relative to the size of local economies. In developing economies, value-added trade contributes some 28 per cent to countries’ GDPs on average, as compared to 18 per cent for developed economies. Furthermore, there appears to be a positive correlation between participation in GVCs and GDP per capita growth rates. The economies with the fastest-growing GVC participation have GDP per capita growth rates some 2 percentage points above average. 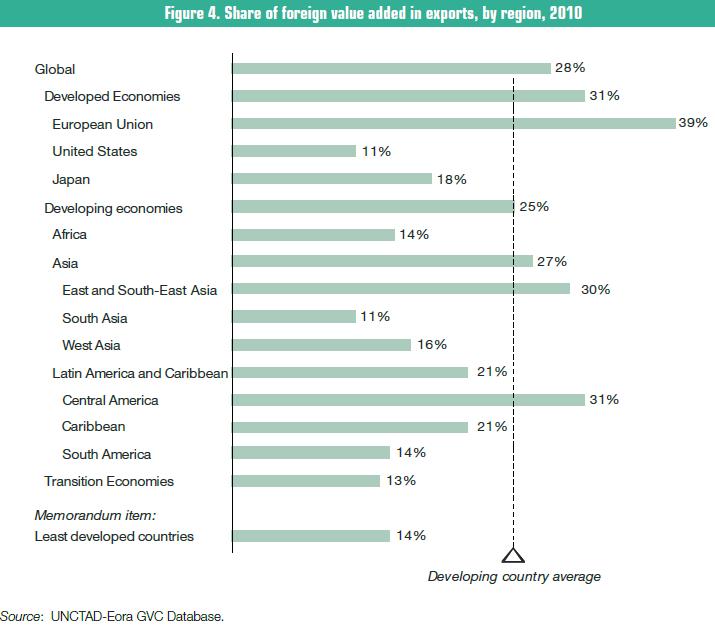 Posted by Chandan Sapkota at 4:17 PM No comments: