Following New Keynesian Economics models, Krugman sketches out a model where he shows the optimal fiscal policy (increasing government expenditure up to the point where full employment is maintained) when the economy is in a liquidity trap.

…when the economy is in a liquidity trap government spending should expand up to the point at which full employment is restored. That’s not a guess or a statement of personal preferences, it’s a result. 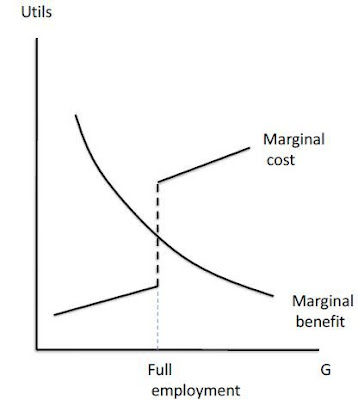 As the figure suggests, there should be a fairly wide range of situations in which the optimal level of G is precisely the level at which the marginal cost jumps – that is, the optimal fiscal
expansion is one that brings the economy right to full employment.

…The bottom line here is that while we usually think of Keynesianism as the preserve of ad hoc models, in this case doing it “right” – using a macromodel with maximizing agents and a proper concern for intertemporal constraints – actually suggests a very strong case for big government spending in the face of a liquidity trap. When the economy is depressed and monetary policy can’t set it right, the true opportunity cost of government spending is low. So let’s get those projects going.

Posted by Chandan Sapkota at 1:34 PM No comments:

Posted by Chandan Sapkota at 5:33 AM No comments: