The catastrophic 7.8 magnitude earthquake on 25 April and subsequent aftershocks (two of them very strong) crippled the economy on all fronts: agricultural output as well as agricultural land was lost, and industrial and services sectors struggled to keep operation open amidst widespread disruption of production and distribution networks, especially on the main demand centers (urban areas including Kathmandu) and trade routes with China. Consequently, GDP growth came tumbling down to 3.0% from an expected 4.6% in FY2015 (unfavorable monsoon had already lowered GDP growth from 5.1% in FY2014). Meanwhile, the subdued market prices during the first three quarters more than offset the increase in prices of goods and services post-earthquake (which struck in the tenth month of FY2015), leading to inflation of about 7.2%. 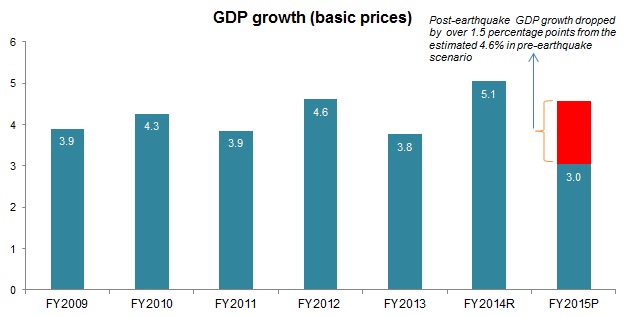 External sector strengthened as lower import growth and higher remittance inflows immediately after the earthquake increased current account balance and balance of payments surpluses (5.1% of GDP and 6.8% of GDP, respectively). Fiscal performance remained dismal as estimated actual capital spending was just about 70% of planned capital spending, and revenue mobilization grew at 13.8% against 20.5% in FY2014.  Capital spending remains woefully low at around 3.5 to 4.0% of GDP. The low expenditure performance and relatively high revenue mobilization led to a fiscal deficit of around 0.2% of GDP (with primary surplus of about 1.6% of GDP in FY2015). Migration slowed down immediately after the earthquake, unprecedented scale of international assistance (primarily led by India together with PRC and the US) was mobilized, and the affected folks struggled to normalize household activity. About a million people fell below the poverty line.

The government estimated that the recovery cost would amount to about $6.7 billion (half of it needed for housing and human settlement), almost a quarter of FY2015 GDP. The international community pledged about $4 billion to finance post-earthquake rehabilitation and reconstruction (which is more than the share to be shouldered by the public sector). So, money was not an issue. The capacity to spend it effectively was. To give momentum to this, the government focused FY2016 budget (and monetary policy) on “building back better” and faster. To this end, an ordinance was promulgated to establish National Reconstruction Authority. The ordinance never made it to the parliament within 30 days and hence its life ended drastically. A bill on NRA is pending in the parliament. It has become a victim of political infighting, delaying post-earthquake reconstruction (urgently needed for short-term recovery and for long-term preparedness in this seismically active country). Initial euphoria about post-earthquake reconstruction has dampened. Pledged funds have remained idle (some may get cancelled if there is no progress), affected folks are still struggling to get by normal life, economy is weaker than before, and the lack of direction on reconstruction has raised frustration levels and the attrition of labor force. Meanwhile, political leadership has lost the sense urgency, hastened promulgation of constitution disgruntling some section of the population, and is still engaged in political infighting. Bureaucracy remains confused and increasingly looking for guidance from political leadership even in minor matters. 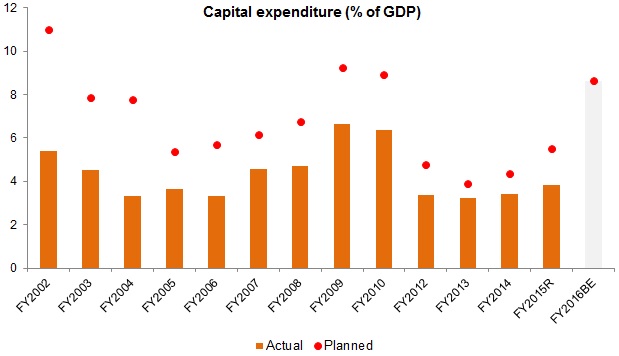 Now, that’s the story about post-earthquake economic tragedy triggered by the natural disaster that affected the upper and middle belts of western and mid-western administrative regions.

Enter the crisis in the Terai region and the debilitating impact on the economy. The crisis was brewing prior to the promulgation of the constitution as some Madhesh-based political parties objected to some provisions included in the draft constitution, which was passed by an overwhelming majority in the Constitution Assembly. The main point was the demarcation of federal states in the Terai region. With no flexibility (both sides) shown to settle the issue politically, the discomfort, disdain (not all but among some) and alienation increased. Consequently, protests and the state’s reaction to protesters (at times excessive on both sides) intensified. India came into the picture to influence changes to the constitution and many analysts allege that it is imposing an ‘unofficial blockade’ on the borders. Supporters of protesting parties picketed the border areas, virtually halting the movement of goods and services. What, how, who, when, etc narrative differ based on the ideological leaning (passion is overpowering reason and cool-headedness) of analysts, consultants, journalists, lawyers, politicians, etc (however ‘independent’ they are).

Anyway, the focus here is economy. Since Nepal is a landlocked country and trade with India accounts for about 60% of imports and exports (plus it provides access to its ports), the activities on the border have severely crippled the economy, which was already hamstrung by the impact of the earthquake and the government’s and the bureaucracy’s inability to initiate rehabilitation and reconstruction swiftly.

The supply disruptions (some allege it as official/unofficial blockade by India) have affected pretty much every economic activity. The Terai belt is considered an important agricultural and industrial hub, and it has all the major custom points along the major border crossings with India. The Terai region accounts for about 51% of agricultural output, 52% of industrial output and 40% of services output. The population of Terai (quite diverse in terms of ethnicity, class, language, income, vocation, etc) is about 50% of total population.

The subnormal monsoon was already affecting plantation and hence potential agricultural output. The disruption to household agricultural activities and shortage of chemical fertilizers along with uncertainty over timely harvesting have dented the outlook for agricultural output. Industrial activity has come to a grinding halt. Mining and quarrying, and construction works have not progressed much due to the delay in post-earthquake reconstruction. The shortage of supply of raw materials or intermediate goods (including petroleum fuel and LPG cooking gas) along with the closure of manufacturing plants have affected manufacturing and construction activities. Industrial sector will most probably grow at a negative rate.

Meanwhile, services sector, which is largely based on remittance-financed imported goods, has been severely crippled. Wholesale and retail trade (which is by far one of the most important and stable drivers of growth in addition to agricultural output) has been severely disrupted. Hotels and restaurants are struggling to cope with the acute shortage of cooking gas and diesel (fires up generator during load-shedding hours). Tourist arrival has plummeted. Real estate and associated businesses are in doldrums. Education institutions are shut down or are partially operational. Hospitals are running out of emergency as well as normal items. Services sector will also most likely grow at a negative rate. 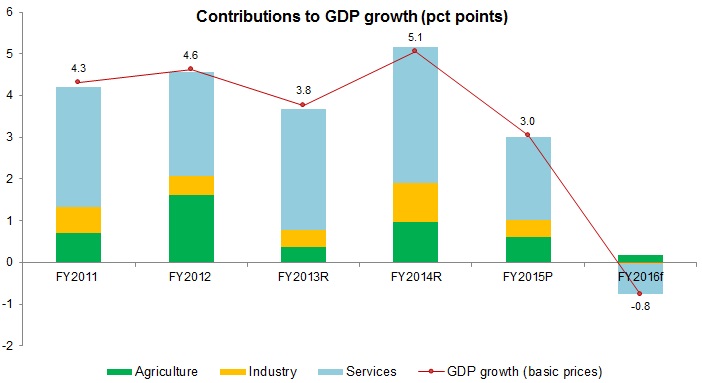 So, the economic outlook looks very grim. As of now (with uncertainty over the resolution of the crisis), the growth rate in FY2016 will most likely be negative (it hasn’t happened so far and the lowest growth [0.2%] was registered in FY2002 immediately after the intensification of Maoist insurgency; services growth was negative 1.8%). My estimate is that GDP growth will plunge to around negative 0.8% in FY2016. Importantly, subject to the longevity of ongoing supply and production disruptions, the effect of the disruption to and dislocation of economic activities as a result of the earthquake and subsequently the crisis in Terai (including blockade) are going to linger on for the next few years if the response from the government is not swift (after the resolution of Terai crisis, which lets hope will happen sooner). The rate of exit from the labor force will be high and potentially migration for overseas work will increase. The existing growth rate is already too low. With the weak state of infrastructure supply and institutional fundamentals, the economic and employment potentials are further constricted. Not a good sign to bring back production and economic activities back to normal!

The food as well as non-food inflationary pressures will likely shoot up overall inflation above 10% and it might linger at higher levels in the following year(s). On the external front, trade deficit will come down along with the plunge in both exports and imports. Remittance inflows may remain strong and hence current account surplus may be remain at high levels. Lower lending compared to deposit will likely lead to liquidity surplus. Lower expenditure and lower revenue growths may result in not much deterioration of fiscal position. However, lower expenditure as well as lower revenue growth will mean some of the fiscal targets will be beyond the reach for this year and the next. Lets hope FY2017 will be better!

In a nutshell, tough times for the economy, the poor and the middle class throughout the country!

Finally, the issue about what needs to be done?
Posted by Chandan Sapkota at 9:19 PM No comments: