Richard Baldwin argues that the convergence of some of the developments in trade has created a new window of opportunity:

Oversimplifying for clarity’s sake, the Doha deal involves reduced ceilings on agricultural protection and subsidisation in exchange for reduced tariff ceilings on industrial goods. Food prices are high so the agricultural liberalisation won’t hurt farmers much and manufacturing production in emerging market is booming, so the tariff cuts won’t be very politically painful.

The new trade giants – India, Brazil, and China – are eager to guard the WTO’s central place in the world trade system; inter alia, they fear that US, EU, and Japanese use of deep regional trade agreements could create a parallel system of trade governance that excludes them.

The EU, having already locked in the agricultural liberalisation unilaterally, is eager to collect the benefits of lower limits on emerging market tariffs on industrial goods.
The US political parties – both Republicans and Democrats – would rather take the issue off the table before the 2012 presidential election campaigns.

[…] If Doha were put on hold until 2013, there is a good chance that it would never get done. The world has changed so radically since Doha was launched in 2001 that the temptation to scrap it and start again (implying that a round won’t be finished in this decade) could prove irresistible. Doha’s negotiating mandate is based largely on leftovers from the 1994 Uruguay Round. China, India, and Brazil would have much greater influence over any new agenda than they did when Doha was launched in 2001.

Here (the main paper by Antoine Bouet and David Laborde 2009) is an updated estimation of the potential costs of a failed Doha Round. The total cost of failure of the Doha Round is estimated to be US$ 1.171 trillion in forgone world exports if protectionist measures persist. Meanwhile, welfare loss are estimated to be US$ 193 billion.

Under a scenario where applied tariffs of major economies increase up to the currently bound tariff rates, we find that world trade decreases by 7.7 percent and world welfare drops by US$353 bn. We then compare a resort to protectionism when the Doha Development Agenda (DDA) is implemented versus a resort to protectionism when the DDA is not implemented. We find that this trade agreement could prevent the potential loss of US$ 809 bn of trade, and could therefore act as an efficient multilateral insurance scheme against the adverse consequences of “beggar-thy-neighbor” trade policies. 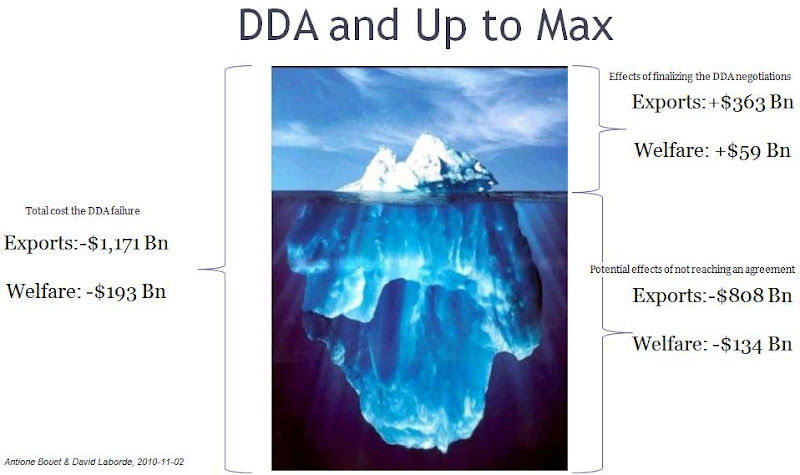