In my latest column, I look at constraints on making Nepal Tourism Year (NTY) 2011 a success. I am a little bit skeptic if Nepal would be able to draw in a million visitors in 2011, given the unaddressed constraints as of now. I hope my prediction is wrong and at least one million tourists visit Nepal in 2011. For my previous piece on Nepal’s tourism industry, see this. For an amazing promotional video of NTY 2011, check this out.

With the aim of attracting one million tourists, the government announced its intention to launch the Nepal Tourism Year (NTY) 2011 campaign last year. Finally, the heat is picking up this year. The major parties—yes it includes UCPN(Maoist) as well—have promised to not resort to bandas, which severely crippled the tourism industry after 1999. The last time such a mega campaign was launched was in 1998 when around 464,000 tourists visited Nepal, earning US$24.8 million in revenue. The Nepali tourism industry has come a long way since 6,179 visitors visited Nepal in 1962. It increased to 509,752 (378,712 by air and 131,040 by land) in 2009.

The government is planning to attract 40 percent of the targeted visitors from India and China. Considering the constraints to increasing the number of tourists and per capita visitor spending, it seems unlikely that one million tourists will visit Nepal in 2011. Getting more visitors than in 2007 and more receipts per visitor than in 2003 would require timely response to containing the constraints ailing the travel and tourism industry. Furthermore, to make it relevant to the public, the government should try to make the outcomes of this national campaign pro-poor, i.e. making sure that the poor people reap benefits of NTY 2011.

A healthy tourism industry is the need of the hour for the entire economy. Due to receding exports, surging imports and rapidly declining remittances, balance of payments (BOP) is in negative territory. Since there is little hope for increasing exports and growing remittances at pre-crisis rate, increasing revenue from tourism industry could be an alternative (but temporary) fix to deteriorating BOP situation. Importantly, revival of this industry would have a strong positive bearing on economic growth as agricultural and manufacturing sectors are underperforming right now. If the constraints are appropriately addressed in time, it could lead to promotion of small-scale local enterprises and increase in low- and medium- skilled jobs. 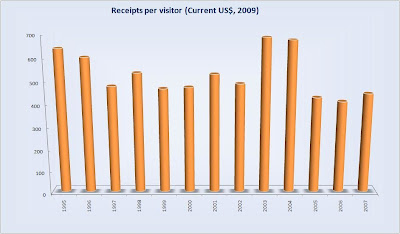 There are multiple constraints to growth and competitiveness of the travel and tourism industry. The major ones are weak regulatory regime, inadequate and poor infrastructure, frequent and fickle bandas, labor strikes, and disincentive-increasing factors such as pollution, garbage disposal and uncontrolled ancillary service-related activities within the travel and tourism industry.

There constraints are strongly reflected in the latest Travel & Tourism (T&T) Competitiveness Report. Nepal’s T&T industry’s competitiveness is weak, ranking 118 out of 133 countries. Particularly, Nepal ranks 131 in visa process, 103 and 125 in ground transport infrastructure and road quality respectively, and 114 in air transport. These are long running problems of the T&T industry. For decades, Nepal has been relying on a single international airport, which is now expected to grace one million visitors in 2011. The national flag carrier has been in terrible shape for a long time: It is bankrupt and lacks aircraft. Similarly, the condition of domestic airports is unsatisfactory.

Frequent bandas and labor strikes are the bane not only to the manufacturing sector but also to the T&T industry. Pictures of tourists ferrying luggage to hotels (and to airports) in rickshaws not only discourages potential visitors but also compels existing tourists to cut short their stay in Nepal. One can only hope that the political parties will keep their promise of making 2011 banda free.

Meanwhile, ad hoc, inconsistent and astronomical price of taxi ride from the airport to hotels is a huge incentive-killer. The moment tourists get out of Tribhuvan International Airport, they are greeted by cunning taxi drivers who charge ridiculously astronomical amount for a ride to hotel that is less than two kilometers away. One of my friends who recently visited Nepal argued that the cost of taxi ride from the airport to a nearby hotel was higher than in his native country. 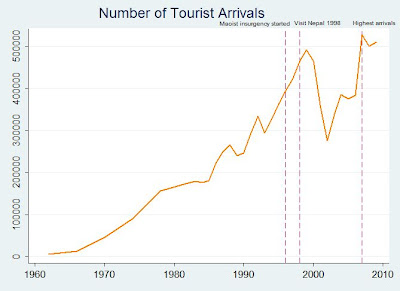 The recurring power crisis has its own legacy. No one knows how we are going to provide uninterrupted electricity and internet access to visitors. Tourists definitely would not like to enjoy their holiday in dark! Additionally, stinking garbage in tourist hotspots deters visitors, leading to a potential decline in business activity in local economy. Among other issues, failure to manage garbage disposal in the Kathmandu Valley and other major urban areas is encouraging tourists go to rural areas, which are relatively cleaner. This has two disadvantages. First, the longer tourists stay in urban areas, the better it is for the urban economy. With increasing migration of rural unemployed youths to urban areas, it is in the country’s interest to increase per capita visitor spending in urban areas so that more jobs are created in places where it is needed the most. Second, the more tourists frequent rural areas, the less would be per capita visitor spending. This problem will get only worse because the only landfill site for Kathmandu Valley—Aletar landfill at Okharpauwa in Nuwakot district—is going to be full in six months, according to Kathmandu Metropolitan City office.

These constraints are not insurmountable. With strong political will, financial backing, and good planning, we can overcome them on time. Note that the number of visitors is correlated with the attractiveness of packages and incentives offered by the T&T industry. The private sector and the government should attempt to make Nepal’s tourism sellable in the international market. What kinds of competitive packages can Nepal provide? How would it be different from the ones provided by our neighbors? What are the advantages to visitors? Honestly and correctly answering these questions would also give clues to contain the constraints.

Irrespective of whether or not the constraints are addressed on time, it is in every citizen’s interest to promote NTY 2011 and try to make it a success. Good luck to all of us!

Posted by Chandan Sapkota at 10:53 AM No comments: 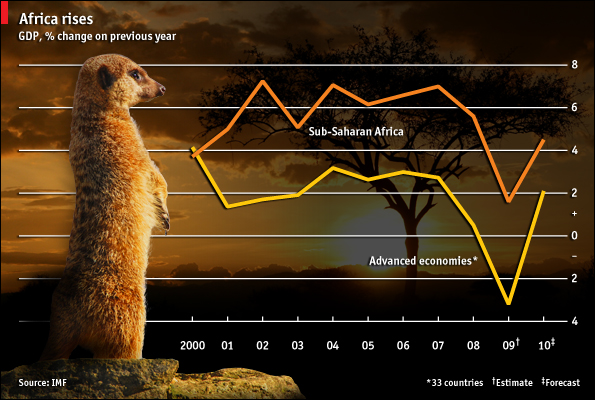 The global recession was slow to reach Africa, but the continent did suffer from dampened demand for its commodities exports and from shrunken venture-capital funds. Economies of countries south of the Sahara together grew by less than 2% in 2009. But recovery is coming sooner than expected. Sub-Saharan Africa's economy is forecast to grow overall by 4.5% this year, in part because of the economic recovery in Asia. This is still slower than the 6% that many development economists reckon is the minimum to enable countries with rapidly increasing populations just to stand still.

Posted by Chandan Sapkota at 1:05 AM No comments: