More on the same budget stuff

Here is a PDF file of the actual Opinion page on print:

Here is an image file of the same page.
Posted by Chandan Sapkota at 10:43 PM No comments:

My latest Op-Ed published today is titled “Enter Socialism with Inflation”. It is about the quantity and quality of budget presented on September 19, 2008 by Finance Minister Dr. Baburam Bhattarai,  to the first elected parliament of the Federal Democratic Republic of Nepal.

Although I am happy that sectoral priorities have been quite upfront and to the point this time- putting hydropower and tourism on the top of priority list- I am not satisfied with the inflated budget, econ-political slogans, policies to tame the private sector, promotion of cooperatives, plans to revive sick and moribund firms, and complete disregard to rising inflation rate. This budget is crafted with a socialist and planner mentality, which might not necessarily lead to a servile state but is certain to screw up individual and private sector incentives, which is the last thing Nepal needs if it wants to see the light of a double-digit growth rate.

Read the full article here. My preliminary notes on this budget article is here. Extended summary of the budget is here. 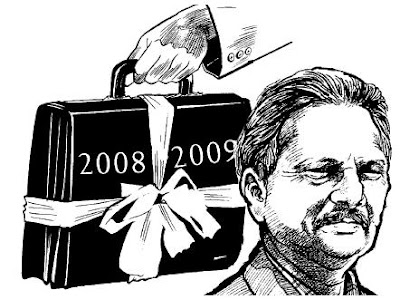 Sept. 19, 2008 will definitely go down as one of the most important dates in the history of the Federal Democratic Republic of Nepal. On that day, Finance Minister Dr. Baburam Bhattarai presented the first budget, albeit two months late, for the coming fiscal year. The first thing that will be noted in the economic history of Nepal will be the heavy, inflated size of the budget, which amounts to Rs. 236,015,900,000. Another thing that will be noticed with raised eyebrows will be socialist stunts like grand but empty slogans, attempts to restructure and tame the private sector, huge deficit financing and high inflation.

…positive aspects, however, are eclipsed by grand and unrealistic plans, digressive policies to revive sick industries, an ambitious GDP growth rate, ignorance of inflation resulting from increased salaries and deficit financing and unrealistic revenue estimation. Considering the quality of the existing social and political institutions, it will not be long before he realizes that these grand plans and expectations are only good on paper.

…Dr. Bhattarai has waved a socialist wand to tame the private sector, which has been largely unhappy with the budget, by creating a parallel body to foster cooperatives. Make no mistake; this is not an assault on the private sector. However, this is definitely a move that will discourage individual and private sector incentives, which are dearly needed now to stimulate entrepreneurial instinct and increase investment.

By placing the Cooperative Board and the Investment Board -- both to be part of the Economic Council chaired by the prime minister -- on an equal footing, the finance minister has embarked on a grand socialist stunt the like of which has not been seen anywhere in the world for the past two decades. Without a clear demarcation of their responsibilities, the interests of these two boards are sure to collide, particularly in the agricultural sector where there is a real possibility of private sector investment being crowded out. Dr. Bhattarai needs to be reminded that the private sector is more efficient than cooperatives, and that if we want to attain a double-digit growth rate, then the last thing needed is a planner mentality and a clash between cooperatives and the private sector.

…These magnificent plans will also bring down the purchasing power of the rupee. Market prices are going to come under tremendous pressure from deficit financing to the tune of Rs. 42 billion, an increase in wages and allowances, cancellation of debts owed by poor farmers to agricultural banks, injection of money into sick industries and the expected increase in remittances and foreign aid.

The mammoth budget, social security investment, post-conflict reconstruction and investment plans will push inflation over the expected rate of 7 percent for the next one year. Since this jeopardizes the exchange rate in the medium term, diminishes export competitiveness and fosters inflation embedded on expectations, the central bank will be forced to raise the interest rate. This will strain lending and investment thereby putting a question mark on the promise of double-digit growth.

The finance minister has given the country a fresh dose of socialist planning agenda filled with unrealistic promises of double-digit growth and prosperity, and a recipe for rising prices. Yes, this budget will find its place in history as being socialist, inflationary, populist, ambitious and unrealistically grand! 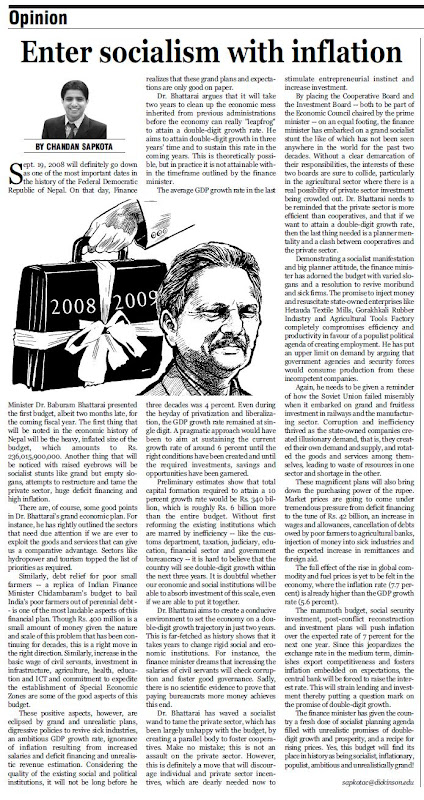 Jeffrey Sachs and Bono are writing a blog for the FT from the MDGs summit starting today. Here is a link to the blog.

Earlier, development economist Paul Collier wrote an Op-Ed in the NYT calling for vigorous pursuit of MDGs, increase in aid, and offering a sense of hope to help the bottom billion.

Easterly would stab this paragraph:

The laggards in the struggle for the MDGs are not the poor countries or their ostensibly corrupt governments.  The laggards are the rich world, so full of promises and high rhetoric and so low on delivery.  The MDGs are falling short because of a lack of promised financing to put in place the clinics, schools, roads, power, and other investments needed for their success.  Six years ago, the rich countries pledged in Monterrey, Mexico to “make concrete efforts toward the international target of 0.7 per cent of GNP in official development assistance.”  Yet the United States stands are 0.16 per cent, Japan at 0.17, Italy at 0.19, Canada at 0.28, Germany at 0.37, and France at 0.39.

Posted by Chandan Sapkota at 2:02 AM No comments: