US capitalism and government involvement

The US was a developmental state with numerous cases of successful government investment to stimulate entrepreneurship , writes William Lazonick.

In all the advanced economies over the past century, first and foremost the United States where the ideology of ’free market’ entrepreneurialism is most virulent, successful entrepreneurship  has depended heavily upon government investment in the knowledge base, state sponsored protection of markets and intellectual property rights, as well as state subsidies to support business investment strategies.  Scholars of the developmental state have tended to see it as a Japanese, and by extension East Asian, phenomenon, while neglecting the role of the developmental state in the United States, the world’s largest and arguably the most entrepreneurial of the advanced economies. Yet, during the twentieth century, the US state has been far more developmental than the Japanese state. Scholarly works have been written on the evolution of particular US industries – for example, agriculture, airliners, aircraft engines, computers, the Internet, biotechnology- that support this proposition. Biopharmaceuticals provide a case in point.

As a precondition for absorptive capacity and hence indigenous innovation, a nation has to have already made the most strategic and most expensive investment of them all: investment in a public system of primary, secondary and tertiary education.

It is a mistake, therefore, to associate growth enhancing entrepreneurship with free market individualism. There is no shortage of entrepreneurial individualism in American-style capitalism, but its transformation into higher standards of living has depended critically on investments, protections and subsidies provided by the developmental state… The state must be regulatory, but it also must be developmental. At the same time, the instability and inequity that accompanies economic growth under American-style capitalism should lead policymakers in developing countries to seek to identify those varieties of capitalism in the advanced nations that can serve as superior models for generating stable and equitable economic growth.

Posted by Chandan Sapkota at 11:10 PM No comments:

Causes of the financial crisis by Viral Acharya and Matthew Richardson

Remittances and the Philippines’ economy

Posted by Chandan Sapkota at 10:19 AM No comments:

That’s 45% increase from last year, yet the telephone penetration is exceedingly low when compared to other counterparts in the region (see the figure below). A news report says that the current telephone penetration rate is around 20.45%. Good news? Probably yes, but still there is a lot to be achieved. There is tremendous demand of telephone services, however supply has not been consistent with demand. The government still tightly controls this industry and has only allowed two private firms to enter the market.

Nepal’s telephone penetration rate also shot up to 20.45 percent from less than 1.5 percent seven years ago on the back of easy availability of mobile phone lines. The country now has a total of 4.7 million mobile phone users and they make up almost 85 percent of telephone users in the country. 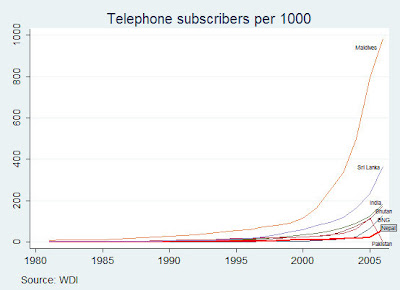 It is not surprising that even with the entry of new players in the market, profits and subscribers for all the three telecom providers (including the state-owned NTC, which used to enjoy monopoly until few years back) have increased by multiple folds. There is nothing to lose by further liberalizing this sector. More subscribers, more penetration, more firms, more employment, more revenue, more connectivity, more (probably) productive economic activity…its all win-win-…-win situations.

India, which has been adding 8 million new customers to its telephone network every month for the last two years, has a tele-density of 33.28 percent. Maldives has already attained 100 percent telephone penetration. Pakistan, Bangladesh and Sri Lanka are also ahead of Nepal. And even a closed country like Bhutan attained a tele-density of 20.6 percent back in 2007.

Posted by Chandan Sapkota at 8:27 AM No comments:

The state of corruption in Nepal

This analysis shows that corruption is the second strongest constraint on economic activity in Nepal. In almost all the standard ratings and analysis on corruption and regulatory regime so far, Nepal has not fared well when compared to countries with similar income level. Similarly, a survey of business personnel, conducted by the World Economic Forum (WEF), shows corruption as the third most problematic factor for doing business in Nepal. 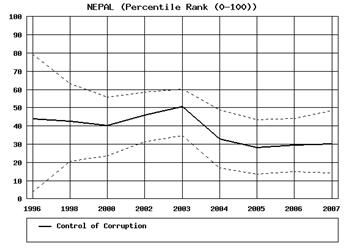 In CPIA transparency, accountability and corruption index in the public sector, Nepal had a score of 2.5 in 2006 and 3.0 in 2007 (1=low and 6=high). The figure below shows how Nepal compares with other low income countries in this rating. The Country Policy and Institutional Assessment (CPIA) rates countries against a set of 16 criteria grouped in four clusters: (a) economic management; (b) structural policies; (c) policies for social inclusion and equity; and (d) public sector management and institutions. The World Bank produces it. 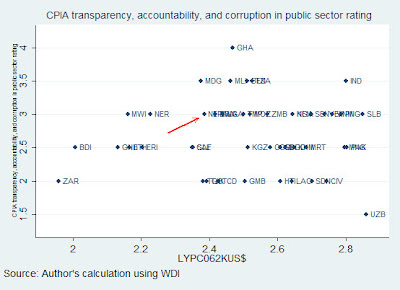 Even though Nepal’s rating in transparency and corruption in public sector is not that different from other lagging low income countries, the median (and also mean) score of 3.0 is still not considered to be business-friendly.

The Corruption Perception Index 2008, published annually by Transparency International (TI), also shows corruption to be at a high level. Among the members of SAARC bloc, Nepal is ranked as the country with the fourth highest level of corruption. Overall, Nepal was ranked 124 out of 180 countries included in the report. 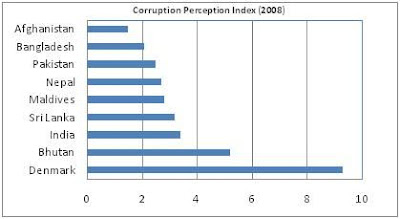 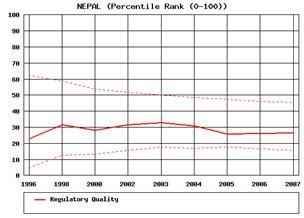 Moreover, in a survey conducted by the WEF for Global Competitiveness Report 2008-2009, business executives ranked corruption as the third most problematic factor for doing business in Nepal. The business sector is more worried about corruption than macroeconomic risks such as tax rates and regulations and human resources. 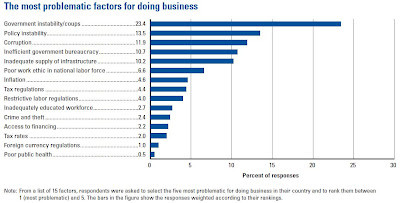 In addition, there is evidence that firms are taking alternative routes to avoid corruption and taxation at customs. It is estimated that 40% of trade with India occurs through informal channels.This shows that traders are bypassing the normal system- a feature of a binding constraint.

All these reports and rankings show that corruption is one of the strongest constraints on stimulating entrepreneurial activity in Nepal.

In an earlier post I argued that bad infrastructure is the most binding constraint on growth in Nepal (well, after that post I have refined my argument further with much better information and analysis. I will post the whole discussion on bad infrastructure later in a different blog post). However, corruption also seems to be equally binding.

It is easier for policymakers to zero in on policies to relax constraints if we can identify the most binding one so that relaxation of that constraint would lead to largest change in the objective function (i.e. growth rate).Taking note of this argument and WLOG, it is consistent to argue that bad infrastructure is the biggest constraint because improving on this constraint in the short term is much easier (and faster) than clamping down on corruption, which is already institutionalized in the economic and social system. This constraint (corruption) cannot be relaxed in the same time as is the case with infrastructure. Therefore, it cannot produce bigger change than relaxation of infrastructure does in the same period. Based on this argument, I argue that bad infrastructure is the most binding constraint on economic growth in Nepal. (However, this does not mean that we do not tackle corruption, which is equally strong constraint as is bad infrastructure. I am just trying to be a little bit more practical in terms of optimal use of resources in the short run. Moreover, the main purpose of this exercise is to identify the most binding constraint on economic activity in Nepal).

Posted by Chandan Sapkota at 6:43 AM No comments: