Where is all the money going?

Prithivi Man Shrestha reports that a large portion of the aid money that comes in the form technical assistance (TA) is unaccounted for in Nepal.

According to the OAG report 2011, of the total Rs 17.19 billion received by the country as technical assistance in the fiscal year 2009-10, it is not clear where 87.43 percent (Rs 15.02 billion) of it went. Of that aid, 6.3 percent was spent for consultants, 3.57 percent for goods and 2.70 percent went for trainings and seminars. “It is necessary to make such aid transparent by classifying the programme and areas it goes to,” the report states.

Of the total 75 agreements signed in 2009-10, a total of 67 were related to 22 ministries, but there was no information on eight agreements and the amount spent, according to the OAG.

“Multilateral donors including the World Bank and the Asian Development Bank and even bilateral donors prepare most of the project documents themselves by using the TA,” said Kailash Raj Pokharel, under secretary at the Finance Ministry. “We have been preparing such documents for small projects only.”

Usually, TA is used to pay for consultancy services, purchasing goods and equipment and trainings and seminars. Most of it goes to the donor countries themselves though it gets reported as being received by recipient country when they report such figures to OECD and their own governments. In Nepal, donors have pledged Rs 45.23 billion for ongoing technical assistance (TA) related projects. This is half the total foreign aid (grants and loans) estimated for the fiscal year 2011-12.

Given the interest of donors in promoting their own personnel (in terms of employment) and capital (in terms of using resources sourced from their countries)—this is important to their citizens—it is understandable that the size of TA might not go down or halted at all. In doing so the donors also do care (or they should) about results on the ground, i.e. whether their effort has produced intended results, which is doubtful most of the time. Most of the donors’ expertise is in brining ‘experts’ to write reports. They have very little knowledge of what works on the ground. Else, more than US$ 12 billion that Nepal received since 1960 would have made a significant dent in an economy whose size is just US$ 12 billion. To further fine-tune their interest (and Nepal’s to some extent) the donors have their own development strategy paper, which should have largely adapted the National Planning Commission’s actual paper. 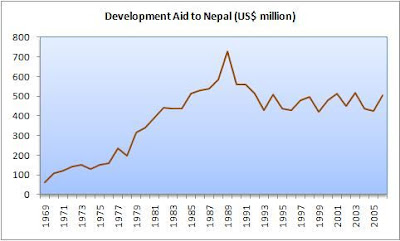 That said, aid has made good impact on education and health sectors. No doubt about that. In other sectors such as promoting trade, assistance has been restricted to writing reports on how best to implement a given agenda or a product. Most of the money is spent on studies, seminars, and conferences—all of which will involve personnel and capital from the donor countries at some stage. Some of the money goes back. Some stays back in the form of short term employment and reports that detail how best to implement a strategy or tackle constraints.

The irony is that substantial aid to actually tackle the identified constraints hardly comes from most of the donors (save the WB, ADB, India and China). Our policymakers and stakeholders are pretty clear on the constraints, but still reports are written to identify the constraints, which are actually identified by talking to policymakers and stakeholders in the first place. The baseline is that if we already know what the constraints are, then why not pump in resources (monetary, human, technical) to tackle them directly, and not waste money in writing yet another report that adds very little value to the already overfull stock of knowledge. Money should not be wasted in writing reports unless they are essential to guide policy in changed and evolving circumstance. Leave that to the academicians and policy wonks. The donors and policymakers should focus on projects that gives the biggest bang for buck, which is in the interest of the citizens of the donor countries and recipient country. And, in the case of Nepal, we already have such projects identified since a long time. One reason they are not implemented could be that the donors cannot cough up enough resources to make them happen in reality. Other might be that the government is simply not caring too much to implement them.