[This blog post is adapted from Nepal country chapter of Asian Development Outlook 2014.]

A significant drop in agriculture and delay in introducing a full budget dragged down GDP growth. Inflation remained high, and the current account surplus contracted as remittance inflows decelerated. Growth is expected to pick up with a favorable monsoon, the timely adoption of a full budget, and political stability following the successful Constituent Assembly election in November 2013.

GDP growth decelerated to 3.6% in FY2013 (ended 15 July 2013) because of an unfavorable monsoon, a shortage of chemical fertilizers, and the delay in introducing a full FY2013 budget. Agricultural output growth slowed sharply to 1.3%, the lowest rate in the past 5 years, while services grew by 6% on improvements in wholesale and retail trade and in hotels and restaurants. Industry continued to languish, growing by a mere 1.6% as persistent electricity shortages, labor disputes, and political uncertainty soured the investment climate. 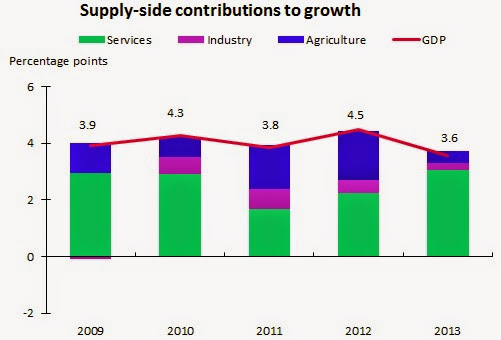 Inflation crept up to average 9.9% in FY2013, even as prices for food and for other goods and services moderated from highs at the beginning of the year, to bring overall inflation to 7.7% in the 12 months to the end of the fiscal year. Subsequently, the low agricultural harvest and high prices for agricultural imports from India pushed up food inflation sharply to bring overall inflation to 9.7% in the month of January 2014.

The delayed presentation of a full budget, which was introduced only in the 9th month of FY2013, combined with weak implementation capacity in the government sharply curtailed total expenditure growth to 3.6%. Importantly, only 81% of the budget allocation for capital expenditure was actually spent, coming to a mere 3.1% of GDP. Strengthened revenue administration, a broadened tax base, and a boost in imports propelled tax revenue 22.6% higher, to bring total revenue including grants up to 19.8% of GDP, exceeding 18.6% a year earlier. As a result, the overall budget balance turned from deficits in recent years to a surplus equal to 0.4% of GDP. 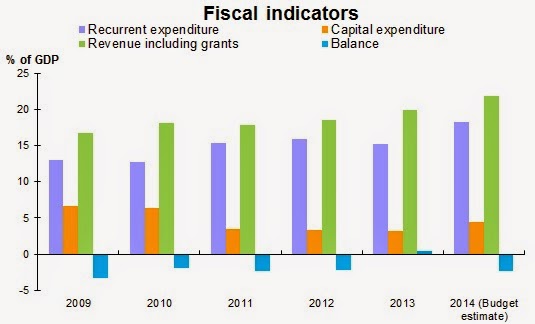 Reflecting the central bank’s push to increase credit to productive sectors, lending to agriculture, industry, and energy picked up, and credit to the private sector grew by 20.2%, accelerating from 11.3% in the previous year. Construction, wholesale and retail trade, services, and mines saw the largest increases in lending. The increases in lending to construction, at 16.4%, and to retail and wholesale trade, at 22.9%, indicate recovery in these sectors from a slowdown in the previous year. The annual average weighted lending rate remained stable at around 12%. 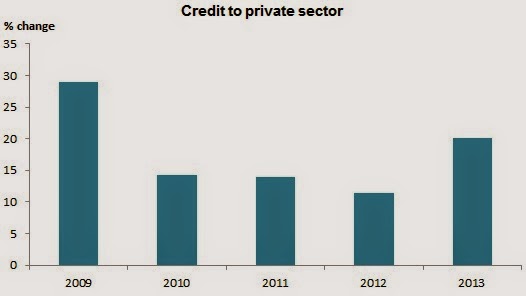 The current account surplus narrowed to 3.4% of GDP, mainly on deceleration of remittance inflows and a surge in the trade deficit . Exports declined by 2.9% as demand slowed and supply-side constraints hurt competitiveness. Merchandise imports grew by 10.8%—largely because reliance on imports to meet domestic demand continued to intensify despite the weakening of Nepalese rupee, and demand for petroleum products rose—pushing the trade deficit up to 27.1% of GDP. Growth of remittance inflows eased to 11.3% after the large 26.6% expansion in the previous year, yet remittances still amounted to 25.6% of GDP. The overall balance of payments surplus moderated to $786.5 million, and foreign exchange reserves increased to $5.6 billion, equivalent to 8.9 months of imports of goods and services. 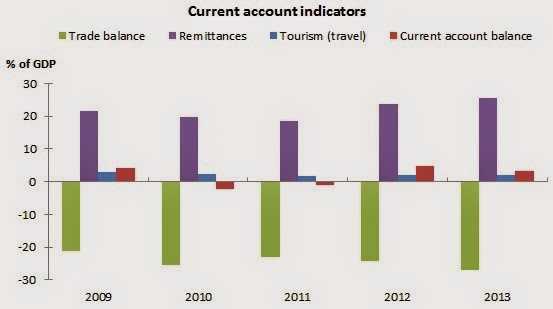 The economic outlook is more optimistic than in FY2013, considering the successful second Constituent Assembly election in November 2013 (following an 18-month hiatus from the end of the first assembly), the favorable monsoon, and expected  strengthening in remittance inflows. The successful political transition to a new government has boosted business and investor confidence. The Constituent Assembly is expected to pass legislation that will promote investment in key sectors and mandate structural reforms. However, there is a downside risk of political instability arising from continued disagreement among the major political parties over unsettled constitutional and governance issues, especially those of federalism and the nature of parliament and the executive. These issues have the potential to create hurdles to drafting a new constitution like those that stymied the earlier Constituent Assembly.

Taking into account the favorable monsoon, more rapid growth of remittance inflows, and the timely introduction of a full budget—and assuming political stability—GDP is projected to grow by 4.5% in FY2014, somewhat less than the government’s target of 5.5%. Normal monsoon rains and adequate supplies of chemical fertilizers have allowed full paddy planting in most of the country. The budget—with a sharp 41.1% boost planned for expenditure and underpinned by positive political developments and clearer government direction—has strengthened business and investor confidence, and so prospects for a boost to industrial activity and exports. Higher remittance-backed consumer demand and an uptick in tourism will support services growth at around 5%. More than half of growth will come from services, and the balance largely from agriculture.

GDP growth is expected to pick up to 4.7% in FY2015, assuming a normal monsoon, a timely budget, continued strong remittance inflows, a revival in real estate and housing, and the better growth outlook in India.

Despite the improved agricultural harvest, numerous factors—wage pressures, upward adjustment of administered fuel prices, the continued weakening of the currency and high inflation in India, and persistent power shortages and other supply-side constraints—are expected to drive inflation up to 10%, well above the central bank’s targeted improvement to 8.5%. Notably, the FY2014 budget increased the civil service salary scale by 18% and provided an additional NRs1,000/month allowance for all government employees. Moreover, the minimum wage for workers outside of agriculture was raised by 29% in June 2013. Inflation is projected to ease only slightly to 9.5% in FY2015, even assuming a good harvest, an appreciable reduction of inflation in India, cautious monetary and fiscal policies, and subsiding domestic wage pressures.

The balance of payments is expected to remain strong in FY2014. Exports are projected to increase by 3.0%, reflecting improving external demand and the gain in cost competitiveness owing to currency depreciation. Imports are projected to grow by 15% on the back of an upturn in domestic demand. Despite the widening trade deficit, higher growth in remittance inflows and increased tourism will sustain a current account surplus at 3.6% of GDP, slightly improved from a year earlier. The increase in the number of migrant workers going abroad, higher pay packages, and stronger incentives to remit money as the home currency depreciates underpin a favorable outlook for remittance inflows. Assuming a further pickup in export growth, some  moderation in import demand, and a sustained advance in remittances, the current account surplus is expected to increase marginally in FY2015 to 3.7% of GDP.

Even with a timely full budget for FY2014, capital expenditure may not be fully spent because of delays (some of them election related) affecting procurement, budget release, and the implementation of approved projects. No major tax changes have been made, and gains from ongoing revenue administration reform may not be sufficient to meet the revenue target of 19.9% set in the budget, especially if imports underperform budget forecasts. Nevertheless, with some shortfall in expenditure, the budget deficit is expected to be around 2.4% of GDP, as envisioned in the budget.


The financial sector is stabilizing after the earlier excessive credit expansion and the subsequent break in the real estate boom in FY2011. FY2013 saw banks and other financial institutions consolidate further. The average capital adequacy ratio stands at 13.2%, well above the 10% threshold (plus 1% capital buffer), and real estate exposure continued to abate and is now well below the cap of 25% of loan portfolio that had been imposed by the central bank. Moreover, nonperforming loans declined to 3.8% of all loans. Nevertheless, banks and other financial institutions need to enhance their operational efficiency and explore further opportunities for consolidation. Credit and savings cooperatives, which fall outside of the purview of the central bank, need to be closely monitored, regulated, and supervised to ensure the soundness of the financial sector.
Posted by Chandan Sapkota at 12:07 PM No comments: