Challenges to investment in South Asia

Challenges to investment in South Asia

Due to economic slowdown, high employment, and sovereign debt risks in developed economies after the financial crisis, investment is gradually flowing to rapidly growing emerging and developing economies. South Asia has drawn the attention of investors as a result of the impressive growth rates, investment reforms, expanding domestic markets and good macroeconomic balance. Boosting domestic as well as foreign direct investment (FDI) has remained one of the main agendas of policymakers in the region because of its positive impact on growth, employment, poverty reduction, industrial expansion and exports. However, despite the increasing level of investment, several investment climate constraints, which are not entirely common to all countries, are still restraining potential investment. While acknowledging that a sound macroeconomic balance (low inflation, low fiscal deficit, low current account deficit, high savings rate and healthy forex reserves among others) is crucial for increasing investment, this article will mainly focus on country-specific firm level challenges to investment. 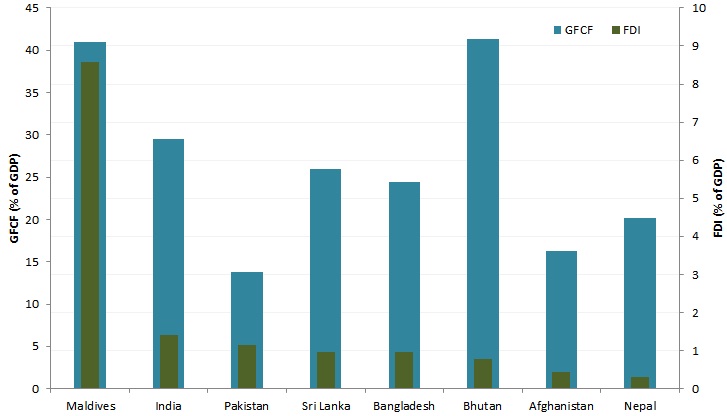 Source: World Development Indicators; GFCF data for Bhutan and Maldives refer to 2009 and 2005 respectively; FDI data for Nepal refer to 2009

Compared to the global investment level, the low share of FDI inflows and relatively low gross fixed capital formation indicate a range of obstacles faced by investors, discouraging them from scaling up investments in the region. Overall, the major constraints to investment, as perceived by firms in South Asia, are lack of adequate supply of electricity, access to finance, political instability, tax rates, corruption, access to land, security, informality, tax administration hassles, lack of human capital, rigid labor regulations and transportation among others (see Figure 2). 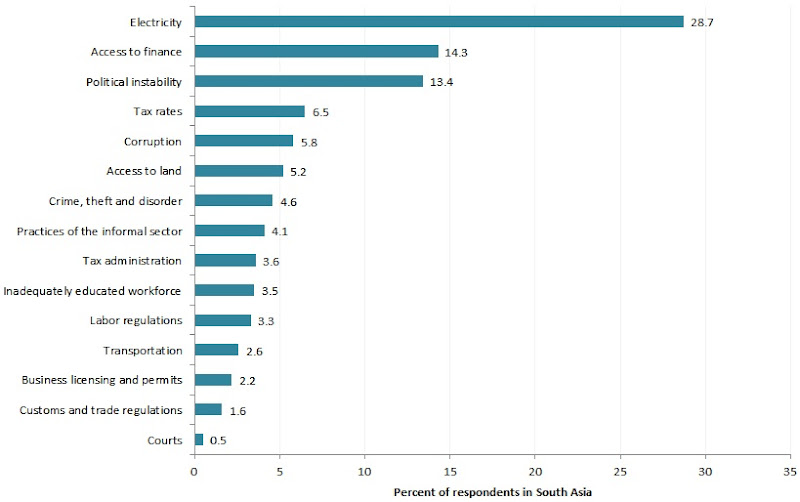 Around 20 percent of firms in Afghanistan perceived that crime, theft and disorder were the biggest obstacles to investment. The other main obstacles were lack of adequate electricity supply (17.9 percent), access to finance (16.8 percent), political instability (16.4 percent), access to land (12.2 percent) and corruption (8.4 percent). The constraints such as tax rates, courts system, human capital and labor regulations were considered less worrisome than the ones mentioned earlier. Specifically, about 45 percent of firms paid extra for private security, which is increased cost by 2.8 percent of annual sales. The number of electrical outages in a typical month averaged 20 and it lasted for 11.5 hours, inflicting losses of about 6.5 percent of annual sales. Consequently, 71.1 percent of firms owned or shared a generator, which was used to supply about 74.9 percent of power demand by firms. It takes 46 days to get electrical connection upon submitting an application. Regarding access to finance, only 3.4 percent of firms had a bank loan and1.4 percent of them were using banks to finance investments. Furthermore, 79 percent of loans required collateral and its value amounted to almost 254 percent of the loan amount.

Around 43 percent of firms in Bangladesh perceived lack of adequate supply of electricity as the main obstacle to investment. The other top constraints were access to finance (34.9 percent), political instability (11.4 percent), corruption (4.3 percent) and access to land (4.1 percent). Specifically, the number of power outages in a typical month averaged 101, which lasted for 1.1 hours and increased cost by 10.6 percent of annual sales. About 52 percent of firms owned or shared a generator, which supplied 23.6 percent of total electricity demand by firms. It takes approximately 50 days to obtain an electrical connection upon submitting application. Approximately 24.7 percent of firms used banks to finance investments and only 17.1 percent of total investment was financed by banks. Regarding corruption, 85 percent of firms reported that they expected to give gifts to public officials to ‘get things done’, especially to get an operating license, import license, construction permit, electrical connection and water connection. Meanwhile, 54.4 percent of firms expected to give gifts during meetings with tax officials and 18.4 percent of firms identified courts system as a challenge to better investment climate.

Around 22 percent of firms in Bhutan perceived access to finance as the main obstacle to better investment climate. The other top constraints were tax rates (12.6 percent), inadequately educated workforce (10.5 percent), labor regulations (9.7 percent) and transportation (9.1 percent). The access to land, courts system, electricity supply and political instability were perceived to be less problematic for investors. Approximately 64 percent of firms used banks to finance investments and almost all firms needed loans. Furthermore, 97 percent of loans required collateral, whose value was about 283 percent of loan. Investors felt that tax administration hassles and high tax rates (40.8 percent of profit4) were also discouraging investors. Regarding human capital, there were virtually no permanent skilled full-time workers in manufacturing sector and only 23.3 percent of firms were offering formal training. The cumbersome labor regulations and inadequately educated workforce were also problematic for investors. While real annual sales growth and annual employment growth were 17.9 percent and 13.1 percent respectively, annual labor productivity growth was just 5.7 percent.

Approximately 35 percent of firms identified electricity as the main obstacle to investment. The other main challenges were tax rates (16.8 percent), corruption (10.7 percent), tax administration hassles (8.5 percent), and access to finance (4.5 percent). Political instability, business licensing and permits, crime and theft, and courts system were not considered that big of a challenge to investors in India. The average duration of a typical electrical outage was 3.6 hours and the average loss was 6.6 percent of annual sales. Almost 41.4 percent of firms owned or shared a generator, which supplied 9.8 percent of demand for electricity by firms. Meanwhile, it takes 30 days to obtain an electrical connection upon submitting application. Regarding tax administration, 6.7 percent of senior management’s time was spent in dealing with the requirements of government regulation. The total tax rate is equal to 61.8 percent of profit.5 Additionally, only 46.6 percent of firms were using banks to finance investments and the proportion of investments financed by banks was just 27.9 percent. Around 74.3 percent of loans required collateral and the value of collateral needed was 126 percent of loan amount.

Around 62 percent of firms identified political instability as the main challenge to investment. The other main obstacles as perceived by firms were electricity supply (26.5 percent), labor regulations (2.6 percent), access to finance (2.5 percent) and transportation (2.4 percent).The number of electrical outages in a typical month averaged 52 and the average duration was 6.5 hours, inflicting loss of about 27 percent of annual sales. Approximately 15.7 percent of firms owned or shared a generator, which satisfied 24.6 percent of electricity demand by firms. It takes 9 days to get an electrical connection upon submitting an application. Investor confidence is low due to losses arising from civil unrest (44 days a year on average) and power outages. The rigid labor regulation and the excessive unionism in the industrial sector have led to closure of domestic as well as multinational companies.6 Furthermore, only 17.5 percent of firms used banks to finance investments and the proportion of investments financed by banks was 12.4 percent. The proportion of loans that required collateral was 81 percent and the value of collateral needed was 260 percent of total loan amount. The lack of adequate infrastructure (road connectivity and electricity) is identified as the most binding constraint to economic activities in Nepal.

Around 67 percent of firms perceived electricity supply as the biggest obstacle to investment. The other main challenges were corruption (11.7 percent), crime, theft and disorder (5.5 percent), access to finance (3.9 percent), and tax rates (3.7 percent).The number of electrical outages in a typical month averaged 40 and the average duration was of 2.3 hours. The loss due to electrical outages amounted to 9.2 percent of annual sales. Almost 26.3 percent of firms owned or shared a generator, which satisfied 29.3 percent of demand for electricity by firms. It takes 106 days to obtain an electrical connection upon submitting an application. Regarding corruption, 48 percent of firms expected to give gifts to public officials to “get things done”. Additionally, 49 of firms paid for private security, inflicting extra cost of around 2.3 percent of annual sales. While almost all firms needed loans, only 9.7 percent of them used banks to finance investments and the banks financed just 8.4 percent of investments. The proportion of loans requiring collateral was 76 percent and the value of collateral needed was 68 percent of the loan amount. Total tax rate is equal to 35.3 percent of profit.7

Around 16 percent of firms perceived that a large informal sector was the biggest obstacle to investment. The other main challenges were access to finance (14.1 percent), tax rates (11.9 percent), electricity (11.4 percent) and access to land (9.8 percent). When compared to these constraints, firms were least bothered by security of investment, corruption, political instability and courts system. Approximately 47.4 percent of firms competed against unregistered or informal firms, leading to loss of markets and profits due to unfair competition. Regarding access to finance, 43.6 percent of firms used banks to finance investments and banks financed 35.4 percent of investments. The proportion of loans requiring collateral was 79.2 percent and the value of collateral needed was 194 percent of total loan amount. Total tax rate is equal to 105.2 percent of profit.8

Overall, the challenges to investment are country-specific. While investors in countries like Bhutan with adequate electricity supply do not think power outages as a challenge to investment, investors in other countries perceive it as a strong constraint. Similarly, while competing unfairly with informal sector is the main headache for firms in Sri Lanka, investment in other countries is crippled by insecurity, access to finance and poor infrastructure. Tackling them by enacting new reforms, earnestly implementing the already enacted ones, promoting and protecting investments while at the same time maintaining good macroeconomic balance might boost investment, which would spur jobs creation and growth.

1It is a proxy for the level of investment in an economy. Specifically, it measures the value of net additions to fixed assets.

3South Asian regional average of indicators is computed by taking a simple average of country-level point estimates. Unless otherwise noted, the figures and obstacles to investment climate are sourced from Enterprise Surveys (http://www.enterprisesurveys.org), The World Bank. The survey year for Afghanistan is 2008, Bangladesh 2007, Bhutan 2009, India 2006, Sri Lanka 2011, Nepal 2009 and Pakistan 2007.

Posted by Chandan Sapkota at 10:39 PM No comments:

Here is what Global Monitoring Report (GMR) 2012 says about achievement of MDGs so far:

GMR 2012: Food Prices, Nutrition and the Millennium Development Goals reports good progress across some MDGs, with targets related to reducing extreme poverty and providing access to safe drinking water already achieved, several years ahead of the 2015 deadline to achieve the MDGs. Also, targets on education and ratio of girls to boys in schools are within reach.

In contrast, the world is significantly off-track on the MDGs to reduce mortality rates of children under five and mothers. As a result, these goals will not be met in any developing region by 2015. Progress is slowest on maternal mortality, with only one-third of the targeted reduction achieved thus far. Progress on reducing infant and child mortality is similarly dismal, with only 50 per cent of the targeted decline achieved.

GMR 2012 details solutions for making countries and communities more resilient in the face of food price spikes. Countries should deploy agricultural policies to encourage farmers to increase production; use social safety nets to improve resilience; strengthen nutritional policies to improve early childhood development; and design trade policies that enhance access to food markets, reduce food price volatility and induce productivity gains. However, the challenges countries face in responding to high food prices have been made more difficult as a result of the global recession.

South Asia has reached the target on access to safe water and will most probably eliminate gender disparity in primary and secondary education by 2015. Progress has also been made with respect to primary completion and, to a lesser extent extreme poverty reduction. Faster progress is required in terms of reducing child and maternal mortality and improving access to sanitation facilities, if the region is to reach these goals by 2015 or soon after. Progress toward halving the proportion of people who suffer from hunger is significantly lagging. All countries for which data are available are off track or seriously off track. Most of them will not reach the hunger target by 2015.