Time 100: The World's Most Influential People

The Time magazine has a list of world's 100 most influential people. I was expecting some economists on the list but found just one: Ben Bernanke. Or am I missing something? 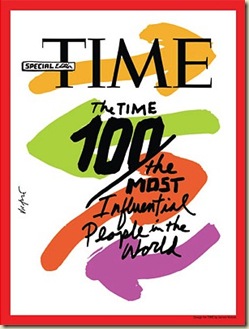 Posted by Chandan Sapkota at 9:53 PM No comments:

The World Bank's South Asia section has a nice analysis of the impact of rising food prices in South Asia, where at least 75% of the population live in rural areas and 60% of the labor force depend on agriculture. Crop yields have declined from 2.1 percent a year between 1950 and 1990 and to 1.2 percent after 1990. The WB believes that technology has the answer to slacking yield in the region.

"Organizing and providing economy of scale to small producers will significantly reduce the cost of doing business in rural areas and facilitate their integration into value chains. This will transform small farmers into an attractive market with greater bargaining power in dealing with the public and the private sector," said Brizzi. While these investments will not affect food prices in the short term, they can help to achieve food security in the future. 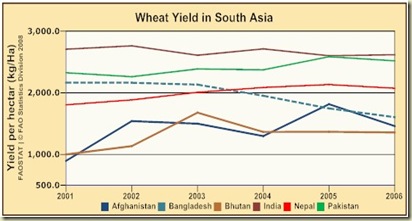 ...Brizzi attributed the increase in the world food prices to raising standards of living in countries like China and India, increased use of food crops for bio-fuels, and increased oil and fertilizer prices. The major grain exporting countries such as Australia has experienced a substantial drop in its production due to weather-related shortages. Increasing demand for meat and protein diet, which requires more input than cereals, in the developing countries have added a new dimension to this phenomena. Also the high international oil price has accounted for increased fertilizer and transportation costs. More analysis is required to determine the impact of these changes on world food prices.

...Brazil currently does not provide subsidy support to the bio-fuel industry. Brizzi, however, warned that Brazil success story will not necessarily apply to South Asia. He pointed out that sugarcane is a water-intensive crop and in Brazil it is largely rain-fed in contrast India, which is mostly based on irrigation. The feasibility of producing fuels with other crops still needs validation in South Asia.

Btw, Will Martin and Marcos Ivanic from the WB has a nice, interesting, and revealing paper about the impact of rising food prices on poverty. The paper is titled "Implications of higher global food prices for poverty in low-income countries."

In many poor countries, the recent increases in prices of staple foods raise the real incomes of those selling food, many of whom are relatively poor, while hurting net food consumers, many of whom are also relatively poor. The impacts on poverty will certainly be very diverse, but the average impact on poverty depends upon the balance between these two effects, and can only be determined by looking at real-world data. Results using household data for ten observations on nine low-income countries show that the short-run impacts of higher staple food prices on poverty differ considerably by commodity and by country, but, that poverty increases are much more frequent, and larger, than poverty reductions. The recent large increases in food prices appear likely to raise overall poverty in low income countries substantially.

Posted by Chandan Sapkota at 7:29 AM No comments:

And this is the fifth article on the Washington Post series on global food crisis.

...Since March 2007, according to the Bureau of Labor Statistics, the price of eggs has jumped 35 percent. A gallon of milk is up 23 percent. A loaf of white bread has climbed 16 percent. And a pound of ground chuck is up 8 percent. Overall, U.S. food prices in 2008 are expected to rise 4 to 5 percent, about double the increases of recent years. And while the total rise is far less drastic than elsewhere around the world, the sharp hike for staples means everyone is feeling the pinch.

...Case in point: Poli Marinova, a Bethesda marketing communications manager, said she has cut her grocery bills by almost 30 percent without switching to conventional foods. Instead, she skips "luxury items" like sushi and prepared sandwiches and soups. "We're buying a lot less overall at Whole Foods. We used to buy juice, biscuits and baby food from there," she said. "Now, we get a lot of that stuff at Costco or the Giant so we can afford to keep buying organic."

Posted by Chandan Sapkota at 6:03 AM No comments:

Email ThisBlogThis!Share to TwitterShare to FacebookShare to Pinterest
Labels: Agriculture, Food Price, US

This is a fourth series form the Washington Post articles on food crisis.

Siphoning Off Corn to Fuel Our Cars

...Across the country, ethanol plants are swallowing more and more of the nation's corn crop. This year, about a quarter of U.S. corn will go to feeding ethanol plants instead of poultry or livestock.

...Rising food prices have given Congress and the White House a sudden case of legislative indigestion. In 2005, the Republican-led Congress and President Bush backed a bill that required widespread ethanol use in motor fuels. Just four months ago, the Democratic-led Congress passed and Bush signed energy legislation that boosted the mandate for minimum corn-based ethanol use to 15 billion gallons, about 10 percent of motor fuel, by 2015. It was one of the most popular parts of the bill, appealing to farm-state lawmakers and to those worried about energy security and eager to substitute a home-grown energy source for a portion of U.S. petroleum imports. To help things along, motor-fuel blenders receive a 51 cent subsidy for every gallon of corn-based ethanol used through the end of 2010; this year, production could reach 8 billion gallons.

..No place demonstrates the competing demands on corn better than Iowa, one of the two biggest corn-exporting states. Iowa is home to 28 ethanol plants, which consume more than a quarter of its corn crop; two dozen others are under construction or in planning stages.

Posted by Chandan Sapkota at 5:54 AM No comments: