There is a consensus among scientists that climate change is real and will variably affect the world we live in and our livelihoods. With nearly 600 million people living below US$1.25 a day, high population density, low-lying areas, and high dependence on agriculture for livelihood, South Asia is one of the most vulnerable regions to climate change. More than 75 percent of South Asia’s poor people live in rural areas and bank on rain-fed agriculture, livestock and fragile forests.

Climate change affects agricultural yield, which in turn has a strong bearing on economy and livelihoods. It alters comparative advantage in the trade of agricultural goods. Due to an expected decline in yields, potential restrictions on food trade and food- price inﬂation, food insecurity might increase. Against such a backdrop, apart from attempts to reduce agricultural as well as non-agricultural emissions and smoothen trade ﬂows, adequately funded and concerted adaptation measures have to be implemented in South Asia.

The emissions level of developed countries with respect to their population is higher than that of developing countries. Yet, the developing countries disproportionately bear the burden of climate change. High-in come countries, with one sixth of the world’s population, are responsible for nearly two thirds of the greenhouse gases in the atmosphere.1 Methane and nitrous oxide produced by the agricultural sector account for about 10 percent of anthropogenic warming. Most of it comes from the guts of cattle and sheep.2 Globally, agriculture and land-use change and forestry contribute 14 percent and 17 percent of CO2 emissions, respectively.3 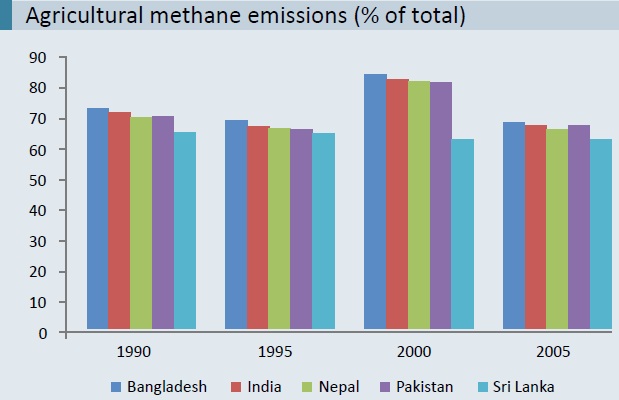 Since most of South Asian countries are net importers of food and all except India are consistently running agricultural trade deﬁcit (Table 1), climate change will not only impact yields but also alter trade ﬂows by affecting prices and volumes of agricultural goods traded within and beyond South Asia.

A country’s supply of food is usually a function of total domestic yield, and prices of imports and exports of food. Hence, trade in agricultural goods is essential to satisfy demand in countries with deﬁcit food production. They will suffer heavily if import prices go up due to a decline in regional or global production triggered by climate change. Climate change also alters temperature and precipitation patterns, directly affecting crop yields and indirectly affecting water availability for irrigation. Its impact on the economy will be reﬂected through ﬂuctuating prices, production, productivity, agricultural investment, food demand and consumption, and human well-being. It will decrease per capita calorie availability, potentially increasing childhood malnutrition.

Climate change will alter the existing pattern of comparative advantage in agricultural trade. It will either in- crease or decrease trade ﬂows depending on the biophysical determinants of relative advantage and socioeconomic determinants of demand. A sudden rise in prices either due to a fall in supply or an increase in demand might disturb agricultural trade ﬂows, and ultimately production, as farmers tend to shift production to those crops that fetch high prices in the market. Partly because of high food and commodity prices, South Asia, on a net basis, suffered an income loss equivalent to about 9.6 percent of GDP between January 2003 and April 2008.4 Climate change is expected to affect prices of major crops such as rice, wheat, maize, soybean, and lentil. It will have a strong bearing on the vulnerability and livelihood of South Asian people.

The expected changes in monsoon—which alone carries over 70 per- cent of South Asia’s annual precipitation in just a four-month period—will affect agricultural yields. The melting of glaciers will increase ﬂooding in the low-lying areas and might induce water scarcity in high altitudes from where glaciers recede. Rising sea levels will affect coastlines and intrude agricultural plains with saltwater, thus jeopardizing production potential of arable land.

The most severe climate change scenario predicts that the Maldives will be submerged and Bangladesh will lose 18 percent of its land. There will be an increase in pressure on natural resources due to rapid urbanization and industrialization. The impact on agriculture and production will cost the economy dearly. Even a temperature rise by 2 degrees Celsius above preindustrial level, which is the minimum the world is likely to experience, could result in a permanent reduction in annual per capita GDP by 4–5 percent in South Asia.5

Compared to a no climate change scenario, various models show that, under a climate change scenario, production of maize, millet, rice, and wheat is expected to decline by 6–23 percent, 9–19 percent, 15–22 percent, and 48–53 percent, respectively, by 2050 in South Asia.6 Meanwhile, net cereal imports are expected to increase by 66.32–87.20 percent by 2050 compared to 2000 levels in South Asia under all climate change models. Note that all South Asian countries except India and Pakistan have a deﬁcit in cereal trade (see Table 2). Only Afghanistan has a trade surplus in pulses. Afghanistan, Bhutan, India, and Pakistan have a surplus in potato and fruits trade. Except for India and Pakistan, all other South Asian countries have a deﬁcit in meat trade. The trade deﬁcit in major crops reﬂects production shortages.

Reliable trade in agricultural commodities might help countries effectively cope with food shortages resulting from unexpected weather patterns. More predictable production, supply and trading regimes will help countries manage food stocks and agricultural trade ﬂows. This will also help tame a rapid rise in food prices, as in mid-2008. South Asian countries should work towards creating a framework on not only increasing production, but doing so in an environmentally and economically sustainable way so that there is adequate production and supply for trade to take place unhindered.

Climate change is expected to increase the frequency and intensity of ﬂoods, droughts, storms and heat waves—all of which will negatively impact agricultural production and increase food insecurity. It will not only impede the ﬂow of agricultural goods within and across borders, but also put the already vulnerable people at risk.

With climate change, the price of rice is expected to increase by 29–37 percent when compared to a no climate change price scenario by 2050.9 Rice and soyabeans will see the highest jump in prices by 2050. The total number of malnourished children in South Asia will increase by 2.54–2.82 percent in 2050. Prices of other food items such as maize and wheat are also expected to increase. This will further affect the already vulnerable people and potentially push many below the poverty line.

Furthermore, yield of wheat—a critical crop for regional food security—is expected to drop drastically by 2030. Given the existing agricultural practices and crop varieties, agricultural yields will decrease by almost 18 percent in South Asia.10 Clearly, South Asia will be one of the most affected and vulnerable regions in the world.

Even with the best efforts, global temperature will rise to some extent. Such rise will negatively impact agricultural production, human development and agricultural trade ﬂows. So, there has to be serious and substantial efforts aimed at both mitigation and adaptation. Developed countries should primarily focus on mitigation, while developing countries should focus on both mitigation and adaptation.

The adaptation costs in South Asia are estimated to be around US$ 1.5 billion per year, in addition to costs for increased agricultural research and irrigation efﬁciency. However, there is lack of sufﬁcient ﬁnancial and technical capacities to manage increasing climate risk. There should be national, regional and global efforts to help South Asian economies adapt to climate change.

At the national level, countries themselves should initiate better agricultural practices such as zero tilling, irrigation efﬁciency, preservation of forests and afforestation, and protection of biodiversity, among others. Furthermore, crop production per drop of water and per hectare of land should be increased. Smart cultivation techniques geared towards preserving soil moisture, maximizing water inﬁltration, increasing carbon storage, minimizing nutrient run-offs and raising yields have to be adopted.

Countries should also invest in rural roads so that there is smooth ﬂow of agricultural goods from production sites to markets. Switching to a low carbon world through technological innovation and easing access to them along with instituting complementary institutional reforms will be important to mitigate vulnerability.

At the regional level, South Asian countries should cooperate on areas such as facilitation of agricultural trade, technology and knowledge sharing, effective management and utilization of rivers that cut through multiple nations, among others. Innovative and novel water management strategies are required to help South Asia cope with rising incidence and intensity of ﬂoods during monsoon and decrease in water level during dry seasons. It should especially be a combined effort of the members of the South Asian Association for Regional Cooperation that have the same sources of water, i.e., the Himalayas. Additionally, to facilitate agricultural trade, regional infrastructural net- works should be built.

At the global level, South Asian countries should seek funds for better adaptation to climate change. Along with putting a proper carbon ﬁnancing mechanism in place, donors should increase the share of ofﬁcial development assistance for agriculture as it has the highest number of poor people directly dependent on agriculture.

There should be greater collaboration on technology, knowledge transfer and funding for agricultural trade facilitation. Since the right price of agricultural products sends a good signal to famers, trade- and production-distorting subsidies in the agricultural sector in developed counties have to stop. To counteract the negative impact of climate change on nutrition intake, an estimated annual investment of around US$2,311million to US$2,963 million is needed in South Asia. Speciﬁcally, under different climate change scenarios and models, agriculture research will need US$239 million to US$347 million, clean water US$46 million, education US$737 million, irrigation expansion US$310 million to US$403 million, irrigation efﬁciency US$823 million to US$889 million, and roads US$62 million to US$532 million.11 Developed countries and donors should provide adequate funding to meet these costs.

In the case of high vulnerability in the short run, social safety nets should be introduced. For example, Bangladesh has safety net programmes— such as vulnerable-group feeding programme, food-for-work programme, and employment guarantee programme—to reduce vulnerability to cyclones and ﬂoods.

2 The Economist. 2009. A Special Report on Climate Change and the Carbon Economy. 3 December.

Posted by Chandan Sapkota at 9:50 AM No comments: