The UNDP and OPHI have come up with a new measure of poverty— Multidimensional Poverty Index (MPI) — that will be used (rather update) the existing Human Poverty Index (HPI) calculated annually by the UNDP in its flagship report HDRs. Here is the full paper and methodology used in calculating MPI.

The MPI assesses a range of critical factors or “deprivations” at the household level: from education to health outcomes to assets and services.  The index ranges from zero to one, with low value meaning low MPI. It ranks countries based on MPI. The MPI value reflects both the incidence (percentage of people who are poor) and intensity (the average number of depravations each household faces) of poverty. Education, health and living standard are the three main indicators. Education is composed of two sub-indicators: years of schooling and child enrolment. Health is composed of two sub-indicators: mortality (any age) and nutrition. Living standard is composed of six sub-indicators: electricity, sanitation, drinking water, floor, cooking fuel, and asset ownership.

The MPI uses 10 indicators to measure three critical dimensions of poverty at the household level: education, health and living standard in 104 developing countries. These directly measured deprivations in health and educational outcomes as well as key services such as water, sanitation, and electricity reveal not only how many people are poor but also the composition of their poverty. The MPI also reflects the intensity of poverty – the sum of weighted deprivations that each household faces at the same time. A person who is deprived in 70% of the indicators is clearly worse off than someone who is deprived in 40% of the indicators.

The measure reveals the nature and extent of poverty at different levels: from household up to regional, national and international levels. The multidimensional approach to assessing poverty has been adapted for national use in , and is now being considered by and .

OPHI researchers analyzed data from 104 countries with a combined population of 5.2 billion or 78 per cent of the world’s total. About 1.7 billion people in the countries covered – a third of their entire population – live in multidimensional poverty, according to the MPI. This exceeds the 1.3 billion people, in those same countries, estimated to live on $1.25 a day or less, the more commonly accepted measure of “extreme poverty”. 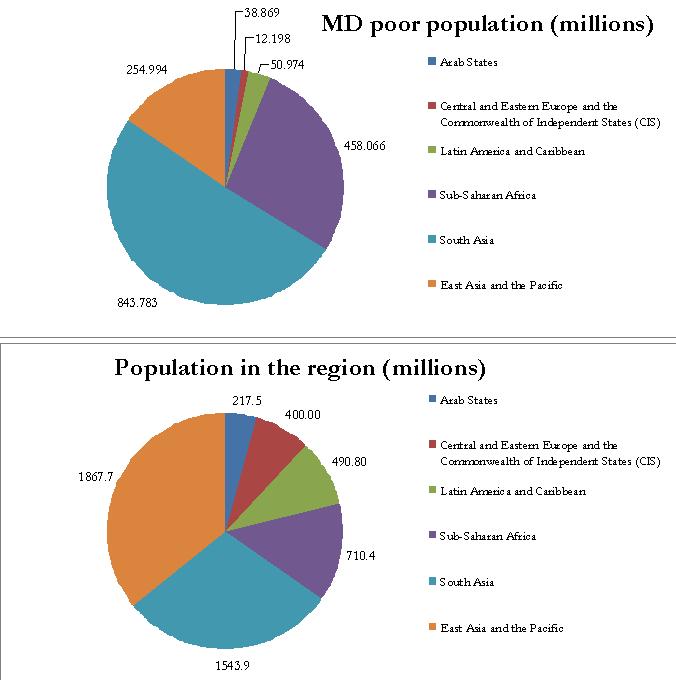 The MPI also captures distinct and broader aspects of poverty. For example, in 90 per cent of people are “MPI poor” compared to the 39 per cent who are classified as living in “extreme poverty” under income terms alone. Conversely, 89 per cent of Tanzanians are extreme income-poor, compared to 65 per cent who are MPI poor. The MPI captures deprivations directly – in health and educational outcomes and key services, such as water, sanitation and electricity. In some countries these resources are provided free or at low cost; in others they are out of reach even for many working people with an income.

Case of Nepal: The percentage of people who are MPI poor (headcount) is 84.7 percent. The average intensity of MPI (average number of depravations each household faces) is 54 percent. is ranked 82 with a score of 0.350. The percentage of population at risk (deprived in at least one indicator) is 76.73 percent. There are 18.3 million MPI poor people in . Compare this with the World Bank’s estimate of poverty: 55.10 percent (15.59 million) of the population living below income poverty line of $1.25 a day. The national poverty line estimates 30.90 percent of population living below the poverty line. The incidence of poverty is 64.7 percent and average intensity across the poor is 54 percent. 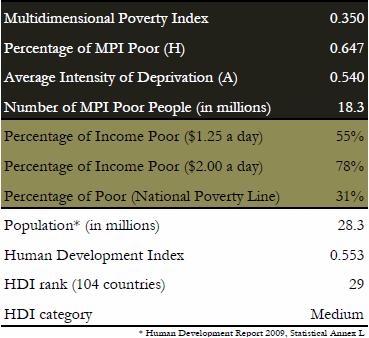 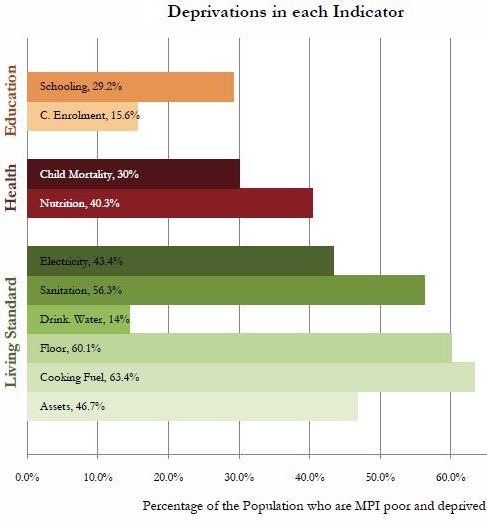 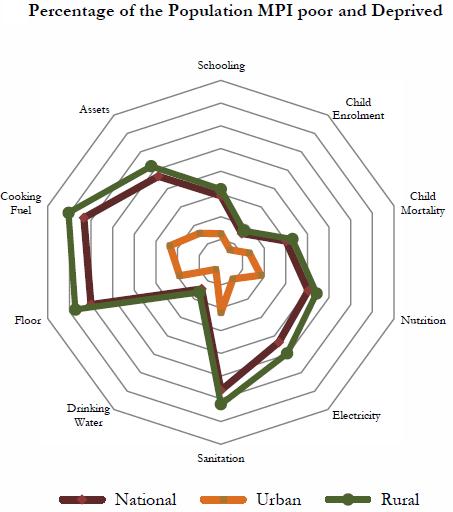