This blog post is adapted from Macroeconomic Update, August 2014, Vol.2, No.2. Here are earlier blog posts on real sector and FY2015 growth and inflation outlook.

Despite the timely full budget, the expenditure performance in FY2014 was unsatisfactory. The CA II elections, budget execution delays, and long-running procedural and procurement hassles constrained absorptive capacities[1], resulting in lower than targeted capital spending. Much of the bureaucracy was assigned to conducting the CA II elections, virtually stalling the capital expenditure related procedural approval and procurement activities for about three months. The estimated actual capital spending was 74.9% of planned capital expenditure in FY2014, lower than the 82.6% achieved in FY2013[2]. Meanwhile, actual recurrent spending was 84.2% of planned recurrent expenditure, also lower than the 88.7% in FY2013 (Figure 8). Overall expenditure grew by 19.6%, with recurrent and capital spending growth at 20.2% and 16.7%, respectively— all higher than their corresponding growth rates in FY2013 (Figure 9). 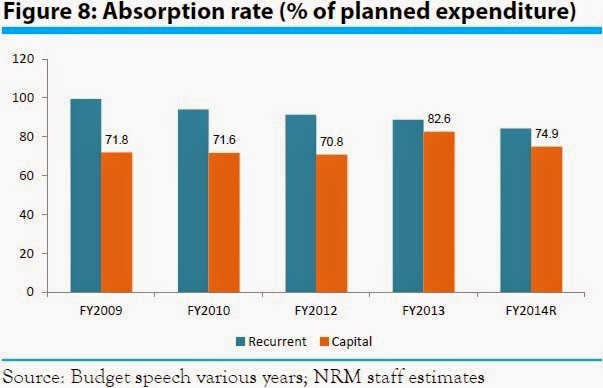 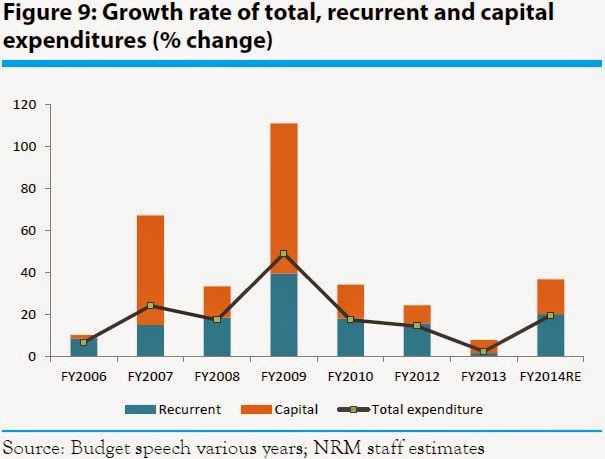 Within recurrent expenditures, compensation of employees increased by 27.6% as a result of the hike in public sector employees’ salaries by 18% and an additional allowance of NRs1,000. Grant to local bodies, use of goods and services[3], and interest and services payments increased by over 20%, but subsidies[4] decreased by 72.7% (Figure 10). Overall, recurrent expenditures are estimated to be 16.4% of GDP, higher than 14.6% of GDP in FY2013. 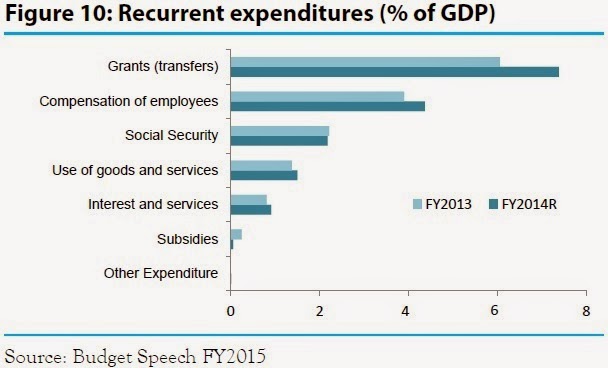 Capital spending continued to be low as in the previous FY, reaching just 3.3% of GDP in FY2014— marginally higher than the 3.2% of GDP posted in FY2013 but much lower than the targeted 4.4% of GDP in FY2014 (Figure 11). Apart from the slowdown engendered by the CA II elections, other persistent factors impeding capital spending are: (i) lack of project readiness, in terms of timely preparatory activities such as detailed project design, land acquisition, establishment of project management offices and required personnel, and procurement plans; (ii) delays in project approval and budget release; (iii) delays in procurement related processes; and (iv) overall weak project planning and implementation capacity[5]. The country needs to drastically increase capital spending, both quantum and quality, to address the large infrastructure deficit (estimated to be between 8% and 12% of GDP annually until 2020), to set the foundation for graduation from LDC category to a developing country status by 2022[6], and to achieve other social development objectives that are curial for inclusive economic growth. 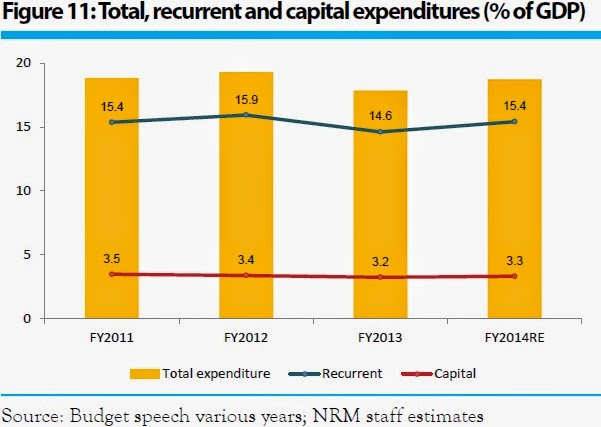 Within capital expenditures, land purchase declined by 48.2%, faster than the rate of decline in FY2013. It indicates the difficulties surrounding land acquisition for infrastructure projects. Spending on building construction, plant and machinery, and research and consultancy grew by over 20%. Vehicle purchase grew by a whopping 248.7%, which could partly be attributed to the low base effect. The expenditure for civil works increased by just 11.2%, reflecting approval and procurement related delays. Except for civil works— which was 2.3% of GDP, the same as in FY2012 and FY2013— none of the eight sub-categories within capital expenditures was above 1% of GDP (Figure 12). 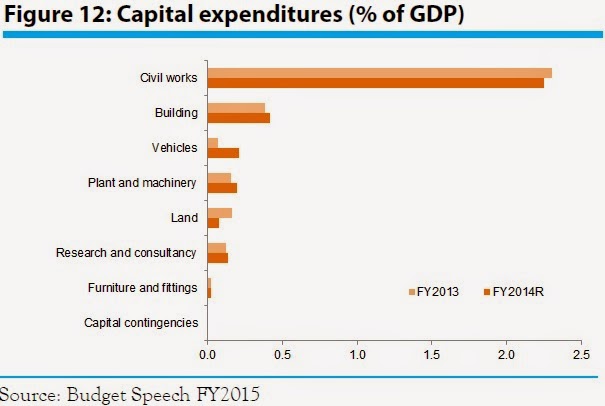 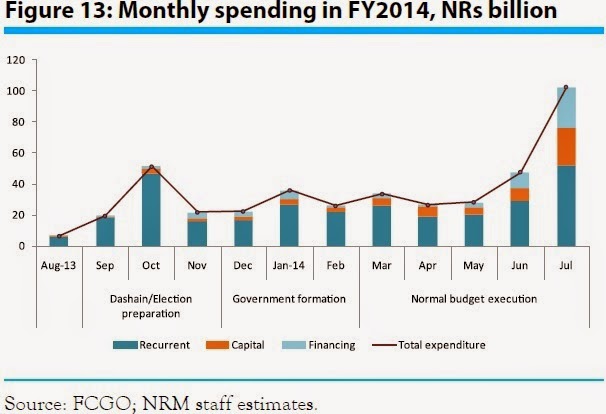 Total revenue grew by 20.6%, marginally lower than its 21.2% growth in FY2013, reaching NRs356.8 billion (18.5% of GDP). It is higher than the budget target of NRs354.5 billion, thanks to the significant increase in non-tax revenue, which partly offset the lower tax revenue growth. While non-tax revenue grew by 23.8% as opposed to a decline by 2.7% in FY2013, tax revenue growth slowed down to 20.1% from 25.8% in FY2013. As a share of GDP, tax revenue mobilization has improved significantly, reaching 16.2% in FY2014, up from 15.3% a year earlier (Figure 14). The continuous reforms in revenue administration, broadening of the tax base, and the higher import bill resulted in robust revenue performance. Some of the notable reforms undertaken in recent years include: (i) information and communication technology based tax returns filing and payments systems; (ii) establishment of a data link with the Company Registrar’s Office to enhance tax compliance[7]; (iii) measures to reduce tax compliance costs; (iv) strengthening of tax monitoring and audit systems; (v) measures to widen the tax net for various tax categories; and (vi) implementation of the Any Branch Banking System (ABBS) for large tax payers. 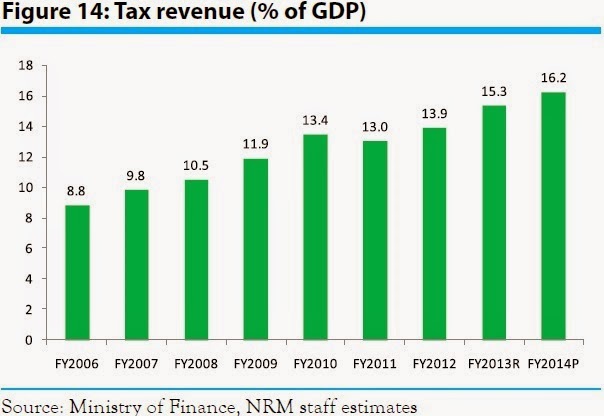 Revenue mobilization from all sources, except vehicle tax, grew in FY2014. The growth rate of value added tax (VAT), excise duty, land registration fee, and non-tax revenue was higher than in FY2013. They increased by 20.9%, 23.8%, 32.5% and 23.8%, respectively. Income tax and customs revenue increased by 16.3% and 19.3%, respectively, lower than 28.1% and 31.1% in FY2013 (Figure 15). The deceleration in VAT collections is attributed to the lower growth of VAT on production; goods, sales and distribution; and service and contracts. Overall, VAT contributed the largest (28.3%) to total revenue mobilization, followed by income tax (21.8%), customs (19%), and excise duty (12.7%) (Figure 16). Taxes on consumption and imported goods, which are largely financed by remittance income, constitute a lion’s share of total tax revenue mobilization—around 70%. Furthermore, import-based revenues (custom duties, VAT, and excise on imports only) account for about 45% of total revenue. 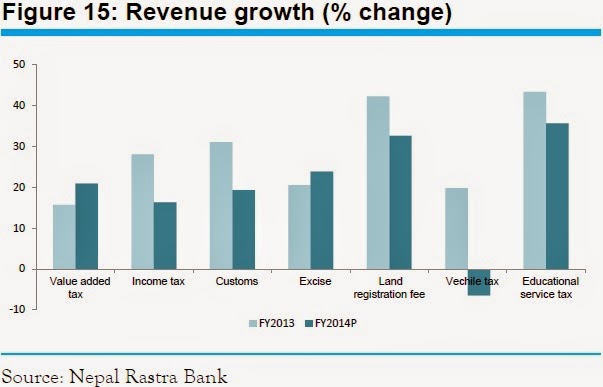 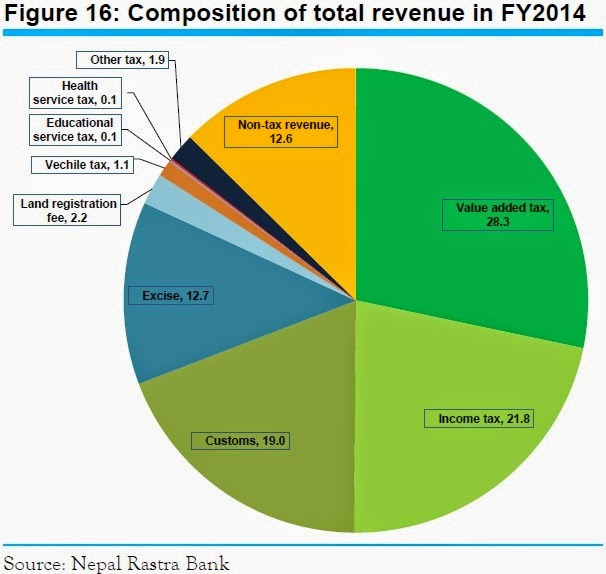 The robust revenue growth combined with the lower than expected expenditure resulted in a lower than average fiscal deficit[8] equivalent to 0.1% of GDP in FY2014 (Figure 17). Though this is better than the fiscal surplus equivalent to 0.7% of GDP in FY2013, it is still lower than the medium-term average fiscal deficit of about 2.2% of GDP. For a low-income country with a large financing need to bridge the infrastructure deficit, particularly in hydropower and transport, running a modest fiscal deficit without jeopardizing fiscal sustainability is desirable. Nepal faces an estimated infrastructure financing gap of between 8-12% of GDP until 2020. The total net borrowing amounted to NRs26.6 billion in FY2014 (1.4% of GDP). 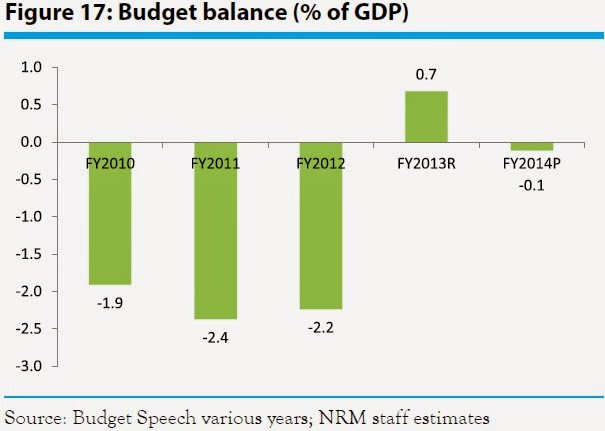 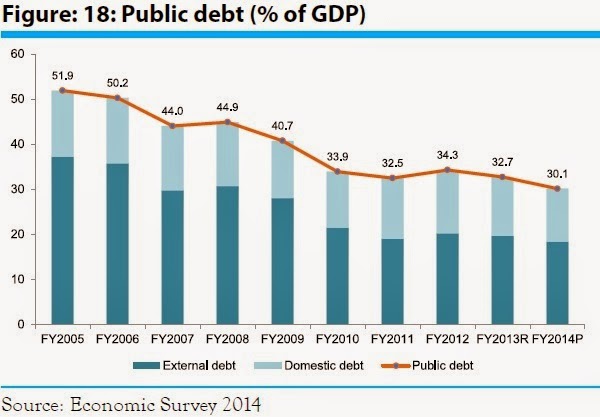 The overall performance of public enterprises (PEs) improved in FY2013 as a result of the lower than expected losses of Nepal Oil Corporation (NOC) and Nepal Electricity Authority (NEA). Of the 37 PEs, 17 made losses and one did not make any transaction. 4 PEs that incurred losses in FY2012 earned profits in FY2013. Compared to a net loss of NRs 3.5 billion in FY2012 (0.23% of GDP), FY2013 saw a surprising rebound with an estimated net profit of NRs 11.4 billion (0.7% of GDP). This is largely attributed to the substantial reduction in losses of NOC and NEA (Figure 19). As a result of the decrease in prices of crude oil in the international market and an increase in administered fuel prices, NOC’s losses dropped to NRs2.1 billion in FY2013 from NRs9.5 billion in FY2012. Similarly, NEA’s losses dropped to NRs4.6 billion from NRs9.9 billion, thanks mainly to the increase in electricity tariff by 20%, decline in exchange rate losses by NRs220 million, and reduction in provisioning for employees’ expenditure by NRs740 million.[9] The combined losses of NOC and NEA amounted to 0.4% of GDP in FY2013, down from 1.3% of GDP in FY2012. Nepal Telecom’s (NT) profit of NRs11.3 billion in FY2013 (0.7% of GDP) compensated for most of the losses incurred by PEs. The government is projecting a decline in net profit in FY2014 due to the expected rise in losses of NOC and NEA (equivalent to about 0.9% of GDP). 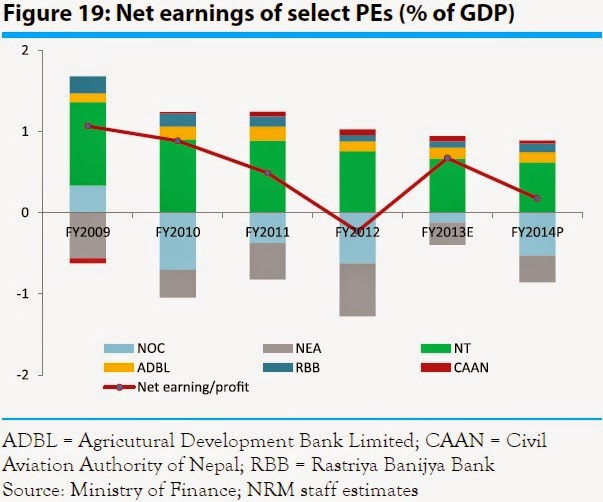 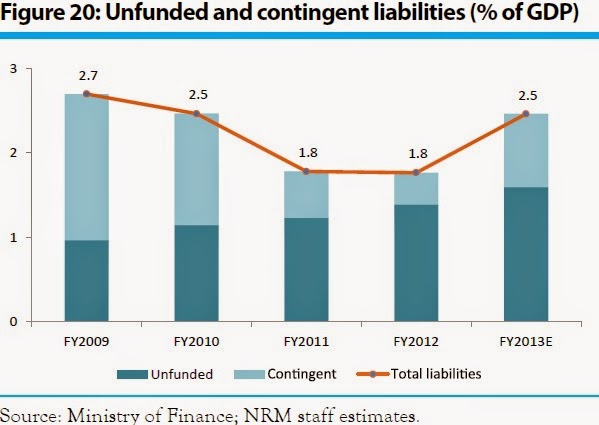 Either privatization or liquidation of loss making PEs needs to be accelerated to reduce the budget drain. The weak financial position of PEs has led to large unfunded liabilities, especially for pension and other related retirement benefits, which could ultimately become the government’s liabilities. It may be noted that due to the lack of accurate and updated data, the contingent liability of PEs presented here are at best conservative estimates. It is likely that the government is exposed to much higher level of liabilities. In this regard, fiscal and macroeconomic stability could potentially be subject to significant risks. Continuing the adjustment of electricity tariffs and adjustment of fuel prices to reflect the true cost of production will help to lower the losses and liabilities.

[1] Absorptive capacity generally refers to the skills mastered by bureaucracy, state of infrastructure, and quality of institutions.

[2] Due to the caretaker status of the then government and the lack of broader political consensus, a timely and full budget could not be introduced in FY2013. Instead, the budget was introduced on a piecemeal basis on 15 July 2012 (one-third of the actual expenditure in FY2012), 20 November 2012 (two-thirds of the actual expenditure in FY2012), and 9 April 2013 (a full budget consolidating the previous two partial budgets). The planned capital spending was NRs66.1 billion in FY2013, of which NRs54.6 billion was spent.

[4] Subsidies include direct subsidies to non-financial public corporations and private enterprises only. Actual direct and indirect subsidies are much higher. This does not include subsidies for chemical and organic fertilizer, micro-hydropower projects, transportation subsidy for seed and fertilizer supply, and interest subsidies to farmers groups and cooperatives, among others.

[5] The Commission for Investigation of Abuse of Authority’s (CIAA) pro-active monitoring of corruption in bureaucracy has also delayed decision making, especially those related to procurement.

[6] For a detailed analysis on prospects for Nepal’s graduation to a developing country status by 2022, see: ADB. August 2013. Macroeconomic Update. Vol.1, No.2, Manila: Asian Development Bank.

Posted by Chandan Sapkota at 10:41 PM No comments: