The outlook for FY2017 growth is moderately optimistic and hinges on the scale of recovery of agricultural output given the normal monsoon, the scope and pace of post-earthquake reconstruction and rehabilitation, budget execution, and remittance inflows. The monsoon rains were above normal and on time unlike in the past few years. Approximately, 80% of total rainfall occurs between June and September. The Ministry of Agricultural Development estimated that paddy transplantation has been higher than in previous years. Paddy transplantation averaged about 95% of 1.4 million hectares of rice field by the first week of August, much higher than 75% in FY2015. However, widespread flooding in the Terai region and mid-Hills, and landslides caused some damage to crops during the last week of July and the first week of August. The outlook for industrial and services output is contingent upon the evolving political situation, reconstruction work, pace of budget execution, recovery of tourism sector and remittance inflows. The scope and pace of reconstruction projects will affect demand for quarrying, manufacturing and construction activities, which largely dictates the trajectory of industrial output. Timely, effective and judicious budget execution, which includes both accelerated spending and reform measures, will be at the core of industrial and services sector recovery. Similarly, a slowdown in the growth of overseas migrants is bound to affect remittance inflows, which subsequently would affect the major components in the services sector. 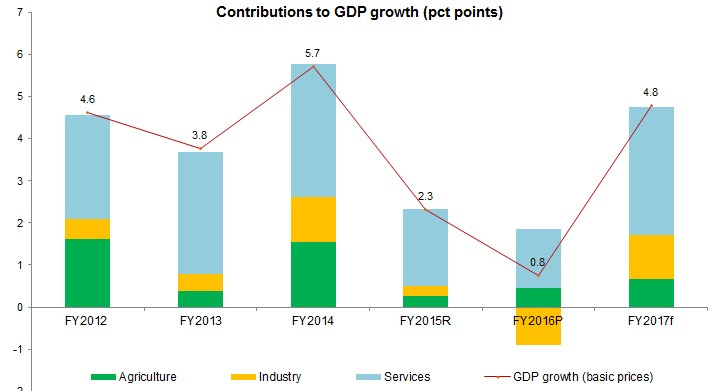 Considering these developments and a cautiously optimistic outlook on reconstruction and political situation, GDP growth (at basic prices) is forecast at 4.8%, lower than the government’s target of 6.5% announced in the FY2017 budget speech. Agriculture, industry and services outputs are expected to contribute 0.7, 1.0 and 3.0 percentage points. A downside risk to the forecast is the more than expected damage caused by natural disasters, especially flooding and landslides, to agricultural output; slow rehabilitation and reconstruction works; the slow pace of budget execution; and depressed demand in services sector arising from the deceleration of remittance inflows. 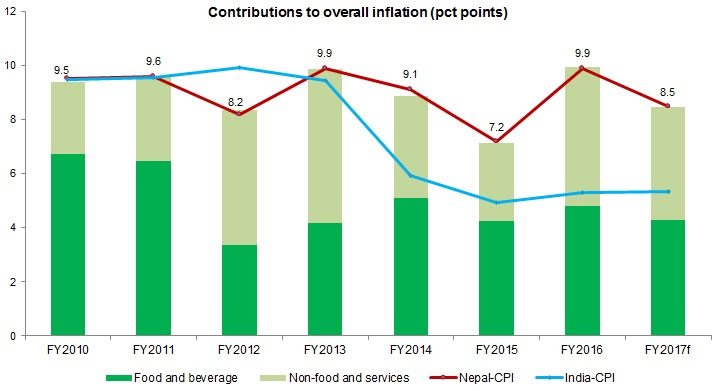 Better agricultural harvest due to the normal monsoon, subdued inflation in India, low international fuel and commodity prices and normalization of production and supplies since February 2016 will likely lower general prices of goods and services in FY2017 despite the demand-side pressures emanating from the earthquake related fiscal stimulus. The prices of cereal grains, paddy, pulses and legume are expected to moderate on account of the favorable monsoon. However, the prices of alcoholic drinks and tobacco products will likely escalate due to the hike in its tariff rate in the FY2017 budget. Similarly, restaurant and hotel prices are also likely to increase as the rebound in tourism sector will stimulate demand. Meanwhile, normalization of supplies and cooling off of demand pressures in housing and utilities will drive the de-escalation of non-food and services inflation. Although furnishing and housing equipment may see a rise in prices on account of the increased demand arising from gradual revival of real estate and housing markets, its impact will not be large enough to offset the decline in prices of other items in the non-food and services basket. Consequently, food and non-food inflation are projected to contribute 4.3 and 4.2 percentage points, respectively to overall inflation of 8.5% in FY2017.

Posted by Chandan Sapkota at 1:17 PM No comments: