Conflict and development in South Asia

Ghani and Iyer have a good note on the relationship between conflict and development in South Asia. This blog post is just jutting down of major points from their note. 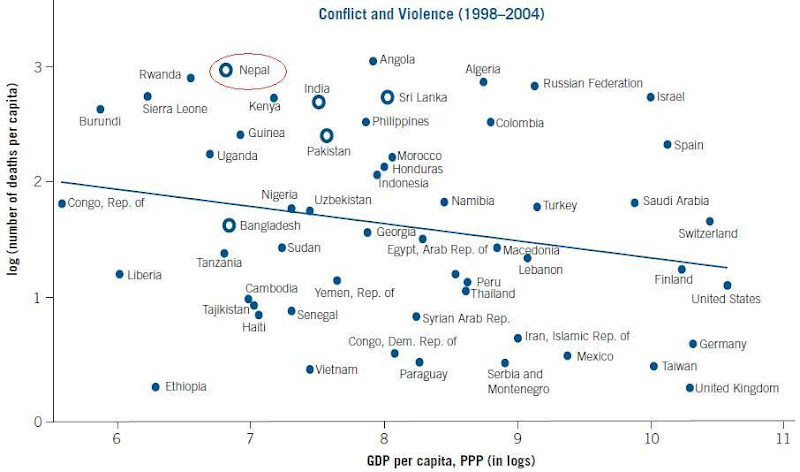 Countries that have low per capita income have a higher conflict rate. However, high income does not guarantee peace and stability also. In Nepal, Sri Lanka and Pakistan, for their given level of development, the conflict rates are much higher. The figure does not show causality, i.e. conflict may be contributing to low per capita income, or low income may be contributing to conflict. In Nepal, all the regions had high conflict intensity during the decade-long Maoist insurgency. Poor countries are at a greater risk of being plunged into conflict. 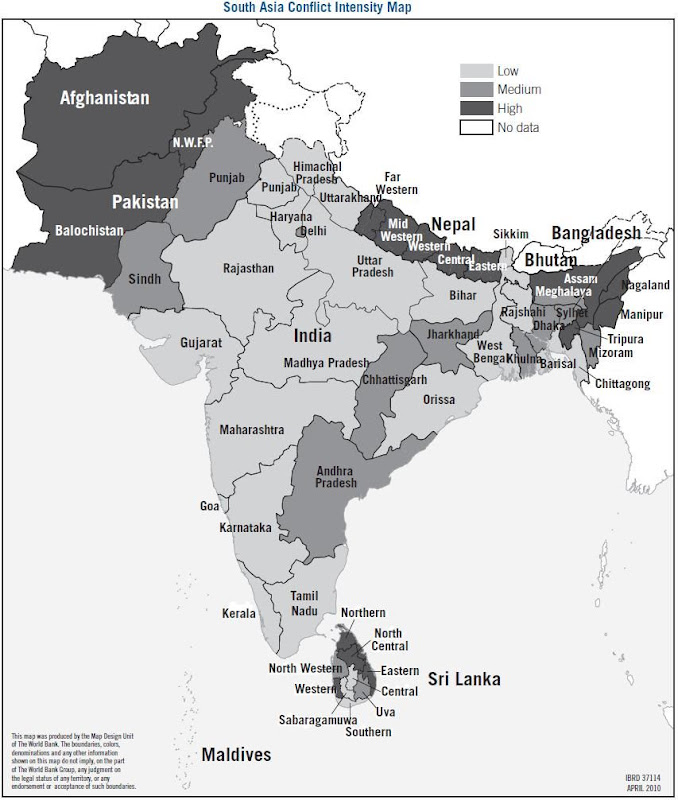 In general, conflict rates are seen to be higher between (in low per capita income ones) and within (in lagging regions) countries. In South Asia, conflict is concentrated in lagging regions, which have lower income per capita than national average. It is easier to recruit rebels in lagging regions because the opportunity cost of conflict is relatively low. Meanwhile, geographic conditions such as forest cover is related to incidence and intensity of conflict. States in India that have higher forest cover have higher conflict intensity. Conflicts can be triggered by low economic growth, unequal distribution in gains from development, political marginalization, shocks from natural disasters, and commodity price shocks.

Reducing conflict is a prerequisite to political stability, which, in turn, is the prerequisite for implementing pro-growth policies. One of the policy options to reduce conflict in South Asia is the deployment of police force, which the authors argue, are underequipped and understaffed. In addition to the police force, armed forces are also deployed depending on the incidence and intensity of conflicts. Another policy option is to conduct negotiations and sign peace pacts with insurgents. An economic solution to conflicts is to expand welfare programs and reduce poverty in conflict-affected areas. Many of the policies launched with this intention have failed due to poor economic policy selection and poor implementation. A right combination of these approaches could be a fruitful policy approach to amicably solve conflicts.

>>More on poverty and conflicts, here are Djankov and Reynal-Querol arguing that poverty does not necessarily cause civil war. Their point is that poverty and civil war could be driven by the same determinants (like colonial history), some of which are missed by in the typical econometric specifications that bat for poverty as a cause of conflict. Meanwhile, Fisman and Miguel argue that in Africa an income drop of 5% increases the risk of civil conflict in the following year to nearly 30%. Short term shocks to income do trigger violent conflicts.

According to a working paper by Iyer and Do, a 10 percentage point increase in poverty is associated with 25-27 additional conflict-related deaths and geographic condition such as elevation and the presence of mountains and forests explain a quarter of the cross-district variation in conflict intensity.

Similarly, Antonio Ciccone argues that a 5% income shock (say by drought) raises the likelihood of civil conflict by 15 percentage points.

Posted by Chandan Sapkota at 10:58 PM No comments: