How to see world economy through two crises

The machine that spun the world around

Paths out of Zimbabwe's dead end

Ways to stem the drift into protectionism

Posted by Chandan Sapkota at 11:57 AM No comments:

Lessons for Africa from China's success against poverty

China's success against poverty is probably one of the most important economic phenomena/developmental success in a period of three to four decades since the Industrial Revolution. There are many explanations for the success of China's fight against poverty (usually ascribed to household responsibility system, township and village enterprise, market-based incentive fostering policies, strong leadership, increase in FDI, etc). There is no doubt that China's economic system was the one with heavy public involvement in creating a market-based/incentive fostering system. While China has been able to decrease poverty by astounding figures, Africa's progress is dismaying. In 1981, China's poverty to Africa's poverty was 4:1, but by 2004, 500 million fewer Chinese lived under a dollar a day than in 1981, while in Africa, the number of poor people rose by 130 million in the same period. Why is there such a divergence? What lessons can we learn from the success of China's fight against poverty? Is similar model applicable in Africa? 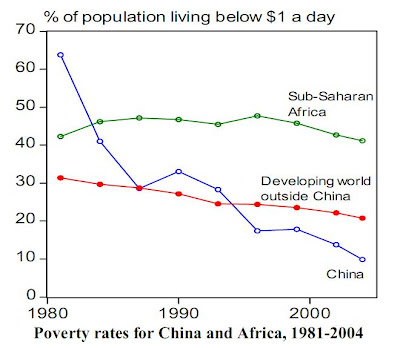 Martin Ravallion, director of the WB's Development Research Group, in a policy research working paper titled "Are there lessons for Africa from China's success against poverty?"argues that despite differences in constraints faced by Africa, two lessons clearly stand out:

The first is the importance of productivity growth in smallholder agriculture, which will require both market-based incentives and public support. The second is the role played by strong leadership and a capable public administration at all levels of government.

He warns that advocating successful policies tested in the East for implementation in Africa without heeding to constraint would not produce the intended results. African now has different characteristics (higher income inequality, lower population densities, and higher dependency rates) than China had when it embarked on market-based economic reforms.

...China’s success illustrates the generic point that freer markets can serve the interests of poor people...Chinese farmers responded dramatically to market incentives, and African farmers are unlikely to be any different in this respect—but there’s far more behind China’s success than just letting markets do their work.

...With Africa’s levels of poverty and relatively abundant supply of land, and with today’s high food prices, an agriculture-based strategy must be at the center of any effective route out of poverty.

Ravallion rightly argues that Africa should learn from Chinese agricultural reform and focus on increasing productivity of small farmers by concentrating policies on fostering rural economy. Most people think that the Chinese success is due to increase in FDI and open markets. However, it should be noted that the boom in FDI occurred only after 1990s, i.e. after China substantially reduced extreme poverty though closely monitored agricultural policies centered at household responsibility system and TVEs (or decollectivization). In fact, Ravallion argues that growth in agriculture over 1981-2004 had about four times the impact on national poverty as growth in manufacturing or services. This should be sufficient to realize that Africa needs to develop small scale farming and increase productivity from these farmings to fight best against extreme poverty. This carries more weight in the wake of recent rise in global food prices. Small scale farming could earn higher income for households if policies are focused on fostering agricultural productivity.

While growth in manufacturing helped reduce poverty in the 1990s by absorbing surplus rural labor, it’s important to note that the “heavy lifting” in reducing poverty took place in the early 1980s, in the wake of China’s rural economic reforms.

...Impatient governments often try to “jump start” the (mostly urban) industrialization process, often by-passing the pressing needs of their rural poor. Arguably even China may have tried to industrialize too quickly. Here, there are useful lessons for Africa from Vietnam, which maintained a more enduring sectoral emphasis on agriculture and rural development than China.

These lessons come from the assumption that the African people would also respond to market-based incentives as the Chinese people did when their economy was opened up to markets and trade. Moreover, it also argues that the African states should implement supportive policies and invest in the economy (i.e. more public investment and a constructive role for the state). An informative paper...good to read!

Posted by Chandan Sapkota at 11:01 AM No comments: