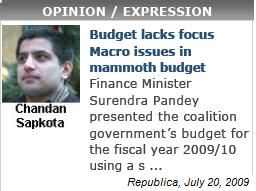 My latest op-ed is titled Budget lacks focus: Macro issues in mammoth budget. It is a review of Nepal’s fiscal year 2009/10 budget. There are many issues in the budget that need explanation. Here, I look at major macro issues only.

Finance Minister Surendra Pandey presented the coalition government’s budget for the fiscal year 2009/10 using a spray gun approach to tackle almost everything but without any concrete direction and clarity. He broke Dr Bhattarai’s record by presenting a mammoth budget of Rs 285.93 billion, which is approximately Rs 50 billion higher than last year’s budget. For the sake of being distinct, the finance minister has simply morphed the Maoist government’s popular and populist programs to fit UML’s economic and political philosophy. However, unlike his predecessor, Pandey avoided setting a highly unlikely target of a double-digit growth rate.

The budget has rightly focused on the need to develop infrastructure for sustained economic growth. The increase in education budget, youth employment and expansion of social welfare programs, including pecuniary incentives for inter-caste marriage of Dalits, is definitely in the right direction. Though some of the programs are designed with good intention, they nevertheless will be used as a tool to get more votes in the next election. There are several programs that look not only implausible but also overly populist and ambitious. I will limit this discussion within the macroeconomic aspects of the budget.

As mentioned earlier, the budget is excessively big for a tiny economy that is reeling with supply bottlenecks and mounting price level. The targeted growth rate of 5.5 percent is a modest projection but will be difficult to attain if the monsoon does not favor our farmers (agriculture sector is expected to grow at 3.3 percent) and the current state of lawlessness, power crisis, undersupply of infrastructure, lack of credit to farmers and manufacturing slackness continues unabated. It will be difficult for the government to manage the economy if these issues are not addressed swiftly and decisively, something that the budget promises but is unclear about.

The Economic Survey 2009—an analytical exercise which takes stock of the economy, identifies constraints and suggests a way forward— which was released a day before the budget was announced clearly lays out the limitations of the government and carcinogenic problems that have been plaguing the economy for a long time: “A big question mark has emerged on our skill of overall economic management in a situation where the Nepalese economy entangled in the vortex of economic sluggishness amidst the double-digit price rise thereby adversely affecting the purchasing power and living standard of the Nepalese people. […] national imperative is making sufficient legal arrangements and ensuring effective enforcement of those provisions for completely banning bandas, strikes especially against transportation and movements of the people.” It is not that we do not know the problems that are restraining growth; it is just that the politicians are not able to forge political consensus to deal with these problems by rising above party lines and by forming a national agenda, irrespective of political ideology. This aspect is not addressed in the budget.

One of the biggest highlights of this budget is the ambitious revenue target. Buoyed by the success of Dr Bhattarai’s campaign to increase revenue mobilization, Pandey is overly optimistic about revenue generation. The revenue target is Rs 176.5 billion, which is more than Rs 36 billion than what the Maoist administration achieved. There are two plausible reasons to doubt if Pandey’s administration will be able to achieve this target. First, the jolt in revenue collection last year occurred primarily because of an aggressive move by the government to incriminate those who were evading taxes. Novel approaches like Voluntary Disclosure of Income Scheme and taxes on education institutions along with a reformed revenue department with incentives to perform better were enforced. This is a one-shot move and not sustainable. Second, the evaders paid lump sum as a penalty for years of tax evasion. Pretty much all the big tax evaders complied with the new ruling. Hence, the stream of tax revenue will be thinner than last year’s. Furthermore, the government has raised income tax exemption level, thus increasing disposable income of people. This will further narrow the revenue stream. A better way to create sustained revenue stream would be to hinge revenue projections with economic growth rate.

Probably the most important issue that will be looked upon closely is the impact of high deficit financing on the already high inflation rate. Inflation rate is expected to be over 13 percent in FY 2008/09. For the next fiscal year, it is projected to be 7.5 percent. Initially, the sudden rise in price level in the domestic market was triggered by rising global food, fuel and commodity prices and internal supply bottlenecks. However, this sudden, transitory price hike became a permanent stamp in the domestic market as retailers began stacking up inventories and withholding supply to the market, thus creating an artificial price rise. There is something fundamentally wrong in the system because a double-digit price level in Nepal is unexpected when the Indian economy is in deflation. The budget has done little to address these underlying issues. Hence, a drop in price level to the tune of five percentage points is very unlikely unless Nepal Rastra Bank (NRB) hikes up interest rates and squeezes credit flow. If the NRB is compelled to tackle rising inflation, which will erode purchasing power and scare away investors, then it will add one more hurdle in achieving Finance Minister Pandey’s modest growth target.

There are no concrete plans for SEZs and private sector development. The much talked about public-private partnership to finance infrastructure projects lack focus and clarity. Except for scrapping scrap tax, institute third-party insurance to reduce risks associated with supply bottlenecks and reduction in capital gains tax to 10 percent from 15 percent, which pleased investors at NEPSE, there is not much for the private sector in the budget. Nepal desperately needs to prop up its exports industry. The budget is mum on formulating a comprehensive industrial policy that would systematically and deliberately engage in aiding those institutions and sectors that would help to attain a sustained growth rate of over 7 percent for over a decade. An updated industrial policy is needed to absorb surplus labor from the agriculture sector and to successfully transition to manufacturing and service-dependent economy. Moreover, there should have been a plan to either divest or to privatize loss-making public enterprises, whose marginal cost of operation is far higher than marginal benefit to the society.

Though the determination to improve on the dismal condition of infrastructures is rightly placed, the plans laid out to move forward on this direction are not. The country needs short-term projects that would be completed in a year or two rather than mega projects that will take a few years to start construction work and a decade for completion. For instance, rather than mega hydropower projects, it would have been fruitful to aggressively go for small- to medium-size projects so that existing pressing demand could be satisfied. This would at least help to assuage the intermittent power crisis. Aiming for projects whose “study phase” would be longer than the life of the coalition government itself is just a waste of resources and time. Meanwhile, there was no need to introduce another ambitious, redundant plan to generate 25,000 MW of electricity in two decades at a time when there already was a plan to generate 10,000 MW in 10 decades.

Overall, Pandey’s budget lacks focus and direction and does not address the most pressing macro issues in the economy.

Here is more about the budget.

Posted by Chandan Sapkota at 8:15 AM No comments:

Stiglitz is perhaps best known for his unrelenting assault on an idea that has dominated the global landscape since Ronald Reagan: that markets work well on their own and governments should stay out of the way. Since the days of Adam Smith, classical economic theory has held that free markets are always efficient, with rare exceptions. Stiglitz is the leader of a school of economics that, for the past 30 years, has developed complex mathematical models to disprove that idea. The subprime-mortgage disaster was almost tailor-made evidence that financial markets often fail without rigorous government supervision, Stiglitz and his allies say. The work that won Stiglitz the Nobel in 2001 showed how "imperfect" information that is unequally shared by participants in a transaction can make markets go haywire, giving unfair advantage to one party. The subprime scandal was all about people who knew a lot—like mortgage lenders and Wall Street derivatives traders—exploiting people who had less information, like global investors who bought up subprime- mortgage-backed securities. As Stiglitz puts it: "Globalization opened up opportunities to find new people to exploit their ignorance. And we found them."

[…] "I was struck by the incongruity between the models that I was taught and the world that I had seen growing up," Stiglitz said in his Nobel Prize lecture in 2001. In the same speech he declared that the invisible hand "might not exist at all." The solution, Stiglitz says, is to move beyond ideology and to develop a balance between market-driven economies—which he favors—and government oversight.

Here is Krugman on Stigltiz:

Yes, Joe should be playing a bigger role — he’s an insanely great economist, in ways you can’t really appreciate unless you’re deep into the field. I’d say that he’s more his generation’s Paul Samuelson than its John Maynard Keynes: as with Great Paul, almost every time you dig into some sub-field of economics — finance, imperfect competition, health care — you find that much of the work rests on a seminal Stiglitz paper.

Posted by Chandan Sapkota at 5:39 AM No comments: