India recently revised its base year to better reflect structural changes in the economy since 2004-05, which was the earlier base year. Now, the new base year is 2011-12. Accordingly, FY2014 GDP growth has been revised upward to 6.9% against 4.7% estimate based on 2004-05 base year.

Here is an infographic sourced from Hindustan Times that illustrates the major changes: 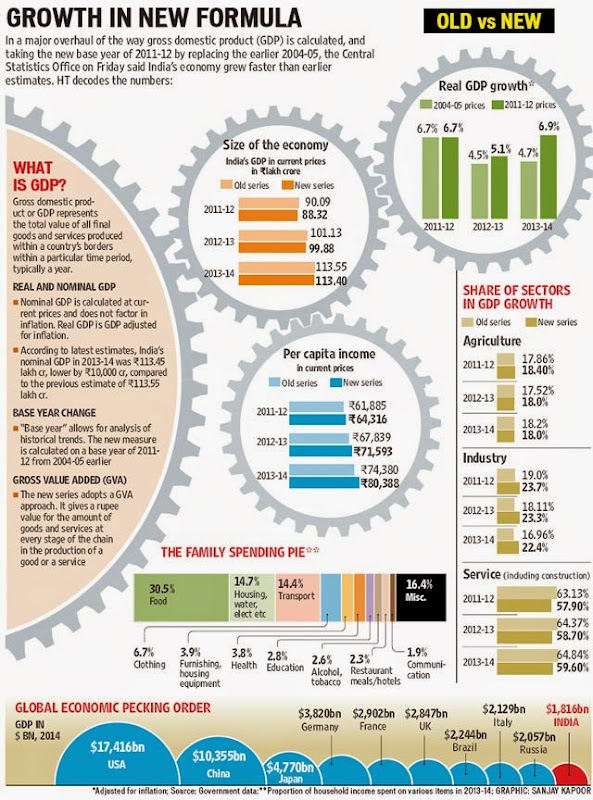 While doing base year revision, three important changes are made: (i) shift in reference year to measure GDP growth, (ii) conceptual changes, and (iii) statistical changes (revision of methodology, adoption of latest classification systems and inclusion of new and recent data sources). Systems of National Accounts, 2008 has been followed. In current prices, there hasn’t been much change in GDP estimate, meaning that the standard GDP ratios (fiscal deficit, public debt, investment, etc.) are unlikely to change drastically.

The table summarizes the latest estimates based on the base year revision. 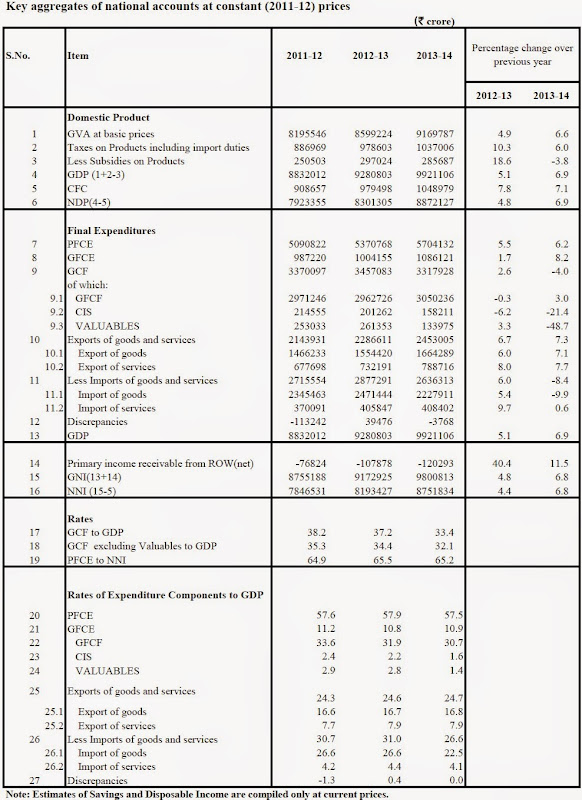 Posted by Chandan Sapkota at 2:54 PM No comments:

Why is global poverty so intractable?

[…] it remains largely out of sight for those who are not living it, safely somebody else’s problem. The fact that most participants in discussions about global poverty – the readers of this commentary included – know few, if any, people who live below the poverty line is an indication of the extent of the world’s economic segregation. If poverty were communicable, its incidence would be far lower by now.

[…]Another reason poverty endures is persistent – and, in many places, widening – inequality. The current level of global inequality is unconscionable. […]To be sure, there will always be a certain amount of inequality in the world; in fact, as with unemployment, a limited amount is desirable as a driver of competition and growth. But the deep and pervasive inequality that exists today can only be condemned. […] Extreme inequality is, ultimately, an assault on democracy.

On employment for all agenda for post-MDG framework (SDGs):

This is an impossible target. All economies of any reasonable size will have some unemployment. In fact, a limited amount of unemployment can help to promote development. To declare “employment” a right is to divest the word “right” of its meaning.

On macroeconomic impact of micro-interventions:

[…]a government policy in which subsidies, funded with newly printed money, are handed out to residents of 1,000 villages. This will not necessarily be a boon for the economy as a whole. Injecting money might improve the living standards in the villages receiving the funds, but doing so may well drive up the cost of food throughout the country, causing residents of non-subsidized villages to fall into poverty. The macroeconomic impact of micro-interventions is an important reason why poverty has persisted, despite well-meaning interventions to combat it.

Posted by Chandan Sapkota at 11:57 AM No comments:

Email ThisBlogThis!Share to TwitterShare to FacebookShare to Pinterest
Labels: Poverty

Electricity losses in Nepal (transmission and distribution) are really large in Nepal (over 34% of total output in 2011). The chart below is extracted from the latest World Bank update on economic prospects. 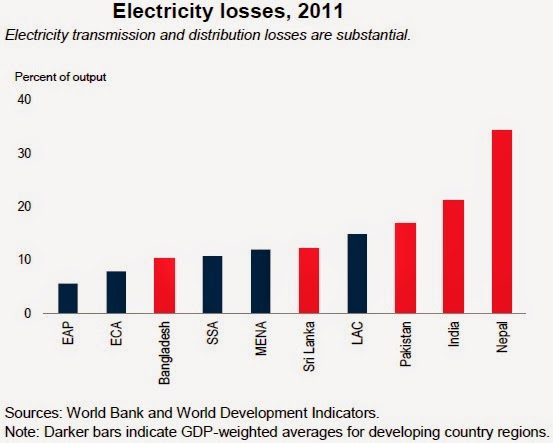 Nepal faces a double whammy (low generation leading to large and growing gap between demand and supply, and large transmission and distribution losses further exacerbating the shortages) due to (i) low investment as well as low capacity to fully execute/utilize available budget productively, and (ii) shoddy construction and substandard appliances increasing inefficiency of the system, and low operations & maintenance budget and capacity. Fortunately, a large number of hydropower projects are ongoing and are expected to generate enough electricity to bring load-shedding to almost zero during wet season. The economy will likely continue to face electricity rationing during dry season in the absence of storage-type hydropower projects.

More on hydropower condition in Nepal here and on the potential demand for electricity in India here.

Below is a chart showing the top ten countries with the largest electricity losses. Nepal comes at number 4 in the world. Electricity losses are increasing (signals massive inefficiency)— 28% in 2005 and 34% in 2011. 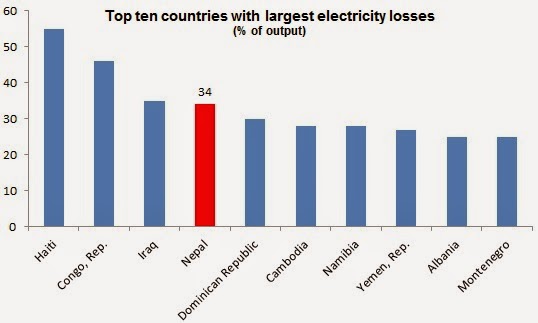 Posted by Chandan Sapkota at 12:25 PM No comments:

Modi-nomics explained in one paragraph

The one paragraph from an article in The Economist that appropriately describes “Modi-nomics” and differentiates it from those of Thatcher and Regan:

A focus on basic infrastructure and public goods; a drive to make civil servants honest and accountable; a penchant for IT; a flair for marketing to business investors. The elements of Mr Modi’s brand of economics are not obviously those of Margaret Thatcher or Ronald Reagan, to whom he has been compared by some commentators. Thatcher wanted a small state. Reagan is held to have said that “the nine most terrifying words in the English language are: ‘I’m from the government and I’m here to help.’” Mr Modi, by contrast, believes government can be made to work better.

Posted by Chandan Sapkota at 2:54 PM No comments:

Email ThisBlogThis!Share to TwitterShare to FacebookShare to Pinterest
Labels: India

Why are oil prices falling globally?

Net oil importing countries (including those who import only) are enjoying the low petroleum prices in the international market as it helps them to manage public finance by lowering fuel subsidies and strengthening balance sheet of state-backed petroleum suppliers and distributors. In the case of Nepal, Nepal Oil Corporation is seeing net losses narrow down (there is still loss in the sale of LPG cooking gas) and consumers are enjoying the declining fuel prices. Non-food inflation seems to be cooling down as well. The government recently allowed the NOC to adjust fuel prices based on international prices (basically the price IOC charges to NOC plus taxes, interest payment on past loans, transportation losses and commission). Lets hope that domestic fuel prices is also increased when international fuel prices start to climb up.

For now, what are the main causes of lower fuel prices? It has to do with a combination of demand and supply forces, along with lower cartel power of OPEC, at play. The Economist lays down the main causes as follows:

The combined effect of these forces are lowering oil prices since the high of $115 a barrel in June 2014.

Posted by Chandan Sapkota at 5:58 PM No comments:

Email ThisBlogThis!Share to TwitterShare to FacebookShare to Pinterest
Labels: General, US

Second, I started blogging on this platform (www.sapkotac.blogspot.com) on 3 February 2008. Cumulatively, I wrote 1,611 blog posts over 2008-2014. Due to workload and other time-varying interests, the number of blog posts is going down each year, registering an average annual decrease of 35.9% over the last seven years. I hope the rate of decrease will stabilize in the coming days. Furthermore, I hope that the blog posts were and are helpful to some visitors. 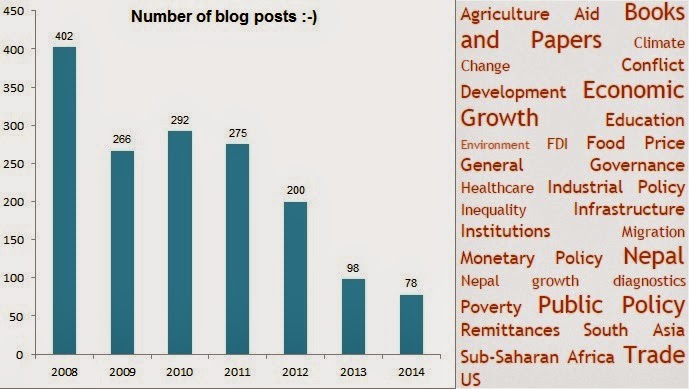 Blog posts have evolved drastically over the years. Initially, they were mostly a collection of articles and interesting papers (sort of extended bibliography for my own reference). Now, blog posts are analytical as well as informational. They are mostly related to contemporary as well as historical development, economic growth and trade issues. The labels next to the figure show the major topics covered (larger text indicate more number of blog posts related to the topic).

Region-wise, a large part of the blog posts are related to Nepal and South Asia (Sub-Saharan Africa as well during the initial years). Thank you for visiting the blog!

Posted by Chandan Sapkota at 1:14 PM No comments: