The (insurmountable) level of crisis in the emerging countries

Emerging markets for the most part have weak and fragile fiscal systems, and the magnitude of the potential run is huge relative even to the large mountains of reserves that many of them have built up.  Socialization of private liabilities may enhance confidence in the rich countries; it will likely magnify the run in emerging markets.  So we are talking about economic collapses that could be significantly bigger than what the rich countries will experience.  And this time developing countries can legitimately say: it wasn't our fault!

It would be interesting to know what new ideas transpired/were floated when Rodrik, Rogoff, Stiglitz, Birdsall, and Sachs met with the UN Secretary-General Ban Ki-Moon recently. Rodrik sees a possible role for the IMF as a true global lender (massive) of last resort (without too many preconditions).

On a similar note, here is an interesting perspective: From capital flow bonanza to financial crash:

For the full sample, the probability of any of the three varieties of crises conditional on a capital flow bonanza is significantly higher than the unconditional probability. Put differently, the incidence of a financial crisis is higher around a capital inflow bonanza. However, separating the high income countries from the rest qualifies the general result. As for the high income group, there are no systematic differences between the conditional and unconditional probabilities in the aggregate, although there are numerous country cases where the crisis probabilities increase markedly around a capital flow bonanza episode.

Most emerging market economies have thus far been relatively immune to the slowdown in the US. Many are basking in the economic warmth provided by high commodity prices and low borrowing costs. If the pattern of the past few decades holds true, however, those countries may be facing a darkening future.

Posted by Chandan Sapkota at 11:46 PM No comments:

This picture shows what happens when supply is created irrespective of demand. Wasteful investment! 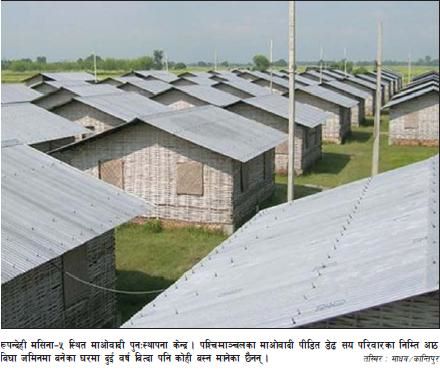 These houses were built two years ago under the Maoists resettlement program. Two training centers and 80 houses (one for two family) were built. Some form of wearing and tearing (depreciation) is already seen in these houses without a single family residing on it. This is a complete waste of resources by the government.

Without first assessing whether the displaced families want to resettle in this particular location (Rupendehi) the government went ahead with the project. Officials now concede that the choice of location was wrong in the first place. This is a typical waste of resource resulting from lack of careful diagnostic of incentives and constraints to resettlement.