The downfall of Nepalese garment industry 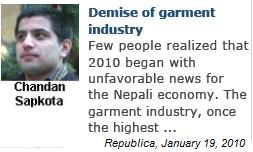 Few people realized that 2010 began with unfavorable news for the Nepalese economy. The garment industry, once the highest foreign exchange earner for Nepal, has almost disappeared. In fact, only one firm still exports readymade garments to the US, once the biggest market for this industry. The growing Indian market has been the focus of attention of the few remaining firms that are struggling to survive. The demise of the garment industry demonstrates the failure of our trade promotion policy and industrial policy. To avoid recurrence of similar event, it is vital that we assess the causes of the downfall of garment industry and learn lessons from our mistakes.

An article in Republica accurately reflects the importance of the garment industry: “Through the first 16 years of journey, the industry with over 1,200 active production units in 2000 occupied about 7.2 percent share of the total manufacturing sector, earned one-third of the total export income, witnessed investment climb to Rs 6 billion and directly employed 90,000 people, supporting livelihood of 450,000 persons.”

Alas, this glory is now lost. Exports to the US, which previously accounted for more than 80 percent of total garment exports have been insignificant this year. Less than ten firms remain in operation. Hundreds of thousands of employees have been laid off. The country has lost a reliable source of revenue. Worse, the failure of this industry has led to the collapse of the whole exports sector.

Where and how did it go horribly wrong? The answer lies in an inability to foresee the changes brought about by globalization. Policymakers and garment investors failed to notice quite obvious signs of change in the international market. They failed to design corrective policies to restructure the outdated domestic garment industry. Instead of addressing the constraints that were making the garment industry uncompetitive, they basked on the already secured preferential agreements and wasted valuable time and resources in securing more of them.

In 1990, the WTO’s member countries signed the Agreement on Textiles and Clothing (also known as the Multi-Fiber Agreement), which eliminated quotas on the trade of textiles and clothing. This was to be implemented in four phases; commencing with 16 percent reduction in quota of 1990’s imports. Thus it was known two decades ago that all quotas in this sector would be abolished. There was ample time to invest and restructure the Nepalese garment industry. However, both investors and policymakers turned a blind eye to the necessity for the reorganization of this industry.

Traditionally, the Nepalese garment industry grew not because its products were competitive and superior, but because it got preferential access to the markets in the US and the EU. The guaranteed market access for Nepalese garments and the imposition of quota on exports from countries that had advanced capital and competitive production mechanism meant that even if our products were not competitive in terms of price and quality, they were still exported without any restriction on quantity.

Where and how did it go horribly wrong? The answer lies in an inability to foresee the changes brought about by globalization.

Prior to the first phase of quota elimination in 1995, Nepal had five years to upgrade its production structure so that firms could expand their size and tap synergies to exploit economies of scale, i.e. as you produce more of the same good, the average cost would decline. This would, in principle, improve price competitiveness of Nepalese garments. Unfortunately, it never happened. Meanwhile, garment investors in countries such as China, India, Vietnam, Cambodia, and Sri Lanka, with the help of their governments, were already working to ensure the competitiveness of their products and the consolidation of their production. They were already preparing for the competitive international garment market after 2005.

The first phase of quota elimination in 1995 was followed by further quota eliminations of 17 percent in 1998, 18 percent in 2002, and finally 49 percent at the end 2004. The second phase of quota elimination hit the Nepalese garment industry and the overall exports very hard, leading to a collapse of total exports, which have not recovered to the level reached in 1997. Though this was a catastrophic blow to the whole export-based sector, it was not appropriately heeded by investors and government. During the ten-year transition phase of MFA, the production structure in Nepalese garment industry hardly changed. Most of the firms had small-scale production units with little cost advantage in production. Some of the intermediate goods that were used to produce final output were simply imported from third countries whose garments exports were subjected to quota restrictions, marginally redesigned, and stamped with ‘Made in Nepal’ tag for export. This meant that producers were merely acting as distributors to earn quick profits, often by gimmickry. There was very little creativity used in enhancing productivity, efficiency, marketing and distribution. Meanwhile, the investors paid little attention to product diversification and eroding competitiveness of their products.

While other governments actively engaged in upgrading their garment industry by establishing Garment Processing Zones, Export Promotion Zones, increasing consultancy for better management, and extending capital and credit to their garment investors, the Nepalese government ignored the aggressive steps taken by other countries and did pretty much nothing. It simply requested more preferential agreements. It also failed to encourage and help investors find niche markets abroad. In addition, the government was unable to ensure the security of investors and the smooth flow of goods across the Nepalese border. Frequent strikes along the main highways led to an increase in transportation cost. This also increased the risk of delivery problems, leading to an escalation in the final price of garments. It further eroded the price competitiveness of Nepalese garments. To make matters worse, trade unions and militant youth wings made a mockery of property rights by occupying and confiscating private property, and forced an increase in wages and allowances, irrespective of labor productivity. The lack of a regular power supply also aggravated the situation.

The downfall of the Nepalese garment industry illustrates some important lessons which could be used to avoid a similar fate befalling other export-based industries. The Nepalese government should not be hankering after preferential export terms; it should be investing and ensuring that domestic firms are competitive in terms of price and quality and are constantly innovating to keep up with cut-throat competition in the international market. Meanwhile, it is imperative that the government keep investors and supply chains away from the clutches of the militant youth wings and the unions. An industrial policy and trade promotion policy designed to address these issues is a need of the hour to keep our industrial base intact.

Posted by Chandan Sapkota at 5:16 PM No comments: