Five main points from an article in The Economist about the low oil prices, plus one additional note on the Nepalese economy.

1. Oil importers are gaining and exporters losing as reflected in their trade balance and fiscal numbers. India has used this occasion to boost revenue by increasing excise duty on fuel without altering much the retail price. Meanwhile, Gulf countries are cutting down subsidies and other countries like Russia are slashing public spending to maintain fiscal prudence to some extent. Venezuela has already declared an economic state of emergency (partly got to do with the political and economic mismanagement).

2. All oil producers are maintaining or increasing their output share in the market. Despite OPEC being a cartel it is unable to dictate prices. Some of its members are pumping out oil below average cost (at times even below marginal cost). Iran is entering the market (with potential output of about 3 million to 4 million barrels a day). The shale gas boom has boosted oil output in the US from 5mb/d in 2008 to over 9mb/d in 2015. Oil glut is here to stay according to latest estimates.

3. OPEC members such as Saudi Arabia (top producer) want to continue pumping oil to suppress prices with hopes of driving shale producers in the US out of the market. However, innovations and efficient production lines have lowered marginal cost of shale gas producers to about $15 a barrel.

4. Overall commodities prices are falling and investment is also declining or put on hold. The slowdown of Chinese economy (about 6.9% growth in 2015 after almost a quarter of a century) is further depressing global demand and investment. Corporate debt is increasing, especially those of state-owned and private companies operating along the oil supply chain.

5. With low commodity prices, stock market volatility edging on the upper side, and lower private investment, the major worry for advanced economies struggling to accelerate growth is lower sticky general prices, i.e. prices are struggling to go higher and hence inflation remains subdued. It means economic growth is also low. Interest rate rise in the US (first time after 2008) will potentially slow down the initial momentum in heating up prices and will make USD stronger. It means currencies of other countries will depreciate somewhat relative to the dollar. Global growth forecast for 2015 is not that great, although the US and India stand out as exceptions.

6. Meanwhile, in Nepal, the supplies blockade at Birgunj/Raxual (the most important custom point) and other places continues. An acute fuel and supplies shortage is ruining the economy. Mismanagement by state-owned companies, mainly NEA and NOC, is further adding woes to the already depressed situation. At present, the Nepalese economy is beyond the point where you would typically categorize as being in an emergency-- it is in a desperate situation and requires drastic measures to recover fast. Production and supplies networks are either dislocated or destroyed, and household and business incentives are transformed in a way that won't serve the economy well. Black-marketing and carteling are prevalent. Remittances (amounting to about 28% of GDP) are sustaining the economy despite all other numbers going south. Public expenditure performance remains horribly diminished (in the first half of FY2016 capital spending is about 6% of planned expenditure in FY2016-- politicians and bureaucrats can blame the earthquake and blockade, but how much have they done on their part honestly to accelerate public spending in infrastructure?), and inflation is edging even higher (will remain above 10% as supply-side constraints continue to exert pressures on prices of goods and services, and inflationary expectations edge up higher every month). Amidst all of these sits a coalition government (with a jumbo cabinet) that is failing to realize and accept the magnitude and severity of the problem. Painful, deep institutional and governance reforms are required now. This primarily includes strengthening institutions by overhauling them (including labor reforms)-- reforming NEA (with its present governance structure, it is the biggest hurdle after lobbyists & politicians, to Nepal's energy future), NOC, NA, establishing PPP office, passing a plethora of reforms without putting many hooks (the parliamentarians are unnecessarily doing this at the committees these days-- and without much study on its ramifications later on), procurement reforms, public service delivery, etc. These are very tough reforms and political parties have a lot to lose given the links between employee unions, corporate houses, lobbyists, intellectuals and politicians. Cosmetic reforms ain't gonna cut it now.
Posted by Chandan Sapkota at 10:50 AM No comments:

The latest Global Economic Prospects 2016, the World Bank's flagship publication, has revised downward its growth forecast for India, Nepal and Pakistan and revised upward by 0.2 percentage points for Bangladesh (in fiscal year basis). 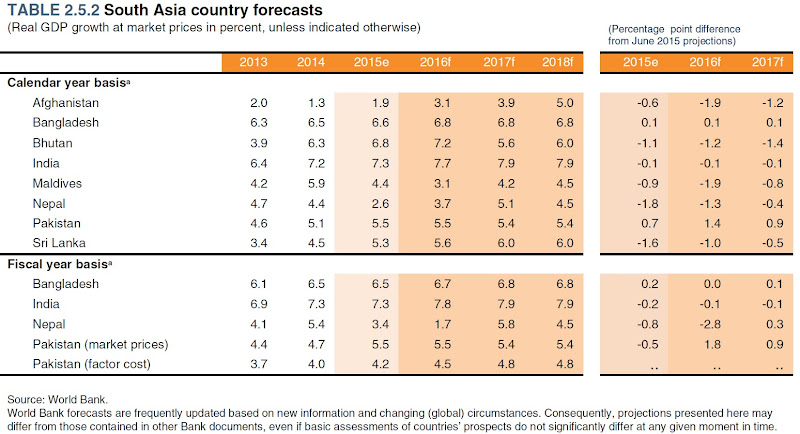 Overall, growth in India will drive the regional outlook. Investment will pick up as exports may slightly recover and remittance inflows will likely moderate as oil-rich GCC countries witness slower growth. Domestic demand will remain strong.

Higher public spending in infrastructure, the recent hike in public sector wages and pick up in exports following amendments to labors will support higher growth in Bangladesh.

The slow reconstruction work after the earthquake and the supplies disruptions will lower growth in Nepal.

Bhutan's growth will remain strong on account of progress in major hydropower projects (three are expected to come online by 2017, boosting exports to India and fiscal revenues).

UPDATE (2016-01-08): The IMF team has produced an excellent set of charts depicting fiscal, external and monetary sectors developments (especially relevant to see the developments since the earthquake and the trade disruptions along the border).
Posted by Chandan Sapkota at 10:15 AM No comments:

Triple whammy: 2015 was a notably bad year for the economy on three fronts

The April earthquake destroyed physical infrastructure and livelihoods, the trade embargo has disrupted economic activities, and finally Prime Minister Oil-led government is undermining already weak institutions of the country. Among these natural, economic and governance shocks inflicted on the Nepali people and the battered economy, the impact of tinkering with institutions for political gains may potentially turn out to be more debilitating for the nation in the long term.

The earthquake and its subsequent aftershocks killed more than 9,000 people, damaged property and public infrastructure, lowered economic growth and per capita income, and thus, increased poverty. Gross Domestic Product (GDP) growth of Nepal dropped by over 1.5 percentage points to 3.0 percent from an estimated 4.6 percent in a no-earthquake scenario. Similarly, nominal per capita income was lowered by about $23. An additional 700,000 to 982,000 people were pushed below the poverty line. The monetary value of the damage was estimated to be about $6.7 billion, almost half of it attributed to housing and human settlement. This natural disaster disrupted and dislocated production networks and distribution systems, whose impact on the economy will linger for years to come unless they are quickly rebuilt following more resilient standards.

The international community liberally launched an unprecedented scale of humanitarian assistance, most notably led by India, Japan, China, and the United States. Equally generous were the financial commitments for reconstruction—to the tune of $4 billion—by bilateral donors and multilateral institutions like Asian Development Bank, World Bank and International Monetary Fund. The 2016 budget anchored on these financial commitments and appropriated about $910 million (3.8 percent  of GDP) for rehabilitation and reconstruction work.

Understandably, expectations were high and there was consensus on accelerating reconstruction with the accepted ‘build back better’ principles. However, the delay in decision making by the government, the seemingly sluggish bureaucracy, and the egotistic political infighting for the National Reconstruction Authority (NRA) frustrated the quake victims and international community. The NRA bill was passed eight months after the earthquake and key decisions of the previous government overturned to suit political interests. While the political apparatus appeared colder and callous than expected when it came to accelerating the reconstruction, the increasingly lethargic bureaucracy seemed inept in swiftly handling normal bureaucratic assignments. Consequently, actual public capital spending is barely above 75 percent of planned spending. Worse, despite the availability of resources, relief distribution and reconstruction are slow and painful.

The blockade came immediately after the promulgation of the constitution on September 20. Given that almost 60 percent of Nepal’s trade is with India and it is the only supplier of petroleum fuel and cooking gas, the disruptions at major custom points are virtually stalling and derailing economic activities. It will have far-reaching consequences on the economic potential, production linkages within and among sectors, employment generation, and stability of capital flows.

The Tarai region accounts for about 51 percent of agricultural output, 52 percent of industrial output and 40 percent of services output. It houses about half of the population, which is quite heterogeneous in terms of ethnicity, class, culture, language, literacy, income profile, and employment opportunities. The trade and transportation disruptions in this region have a knock-on effect on production and distribution networks throughout the country. The lack of fuel and cooking gas is crippling household as well as business activities. The uncertainty over market demand and supply has either delayed or destroyed agricultural harvesting, depleting an important source of employment and income source for about 75 percent of the population who depend on agriculture for livelihood.

The blockade-induced shortage of chemical fertilisers is turning fertile agricultural fields into barren lands, and the lack of raw materials and fuel has delayed almost all development projects that are critical to not only accelerate existing economic growth, but also to expand the boundaries of potential growth and employment opportunities. Consequently, for the first time in over two-and-a-half decades, the economy may probably grow at a negative rate. Meantime, prices of general goods and services will stay high, public capital spending may be even lower, more youths may seek employment opportunities overseas, and more households will be pushed below the poverty line.

Finally, there is an institutional shock inflicted by the present government that will probably have far reaching financial and operational consequences. The government is scrambling to contain the fallout of the delayed reconstruction and blockade on the economy and the population. However, without political resolution to the Tarai issue and easing of the blockade, economic recovery is almost impossible. So far, the government’s steps to address these are not up to the mark.

The rhetoric does not match the unfolding reality. First, the supplies blockade has abetted black market transactions, and distorted household and business incentives. Smuggling and black marketing of goods and fuel are now considered more lucrative than farming and other productive means of livelihood. Cartels, syndicates, unions and lobbyists are running the show more freely than before, affecting decision-making and operations at key state-owned enterprises and in almost all sectors.

Meantime, the prime minister is expanding the Cabinet and hastily dividing ministries in a way that defies logic. These institutionally damaging steps are taken for political survival, which unfortunately has again superseded concerns about the economy, employment and development. Normally, in order to add one more office, a detailed organisation and management survey is conducted and properly vetted at various layers of bureaucracy and government. By ignoring this process and creating confusion in an already lethargic bureaucracy, the government is further weakening its performance, eroding bureaucratic capacity, creating more layers of bureaucratic maze, and affecting public spending and services delivery. It does not bode well for the economy.

Overall, it was a year of triple whammy of delayed reconstruction, supplies blockade and a bad precedent of tinkering institutions for political gains.

It was published in The Kathmandu Post on 04 January 2015.
Posted by Chandan Sapkota at 8:22 AM No comments: