The impact of labor income on poverty

How much does changes in labor earnings influence poverty (by income source)? A recent study by Inchauste et al. (2012) shows that change in labor income was the largest contributor to poverty reduction in 16 countries. Specifically, labor income accounted for more than half of the change in poverty in 10 countries and over 40% in another four countries.

Now, why has labor income increased? The reasons could be more working people, higher earnings per workers, changes in occupation structure or sectoral composition of employment, and improved human capital (education, skills and experience) among others. The authors focus on Bangladesh, Peru and Thailand to find out the answer. Their analysis shows that the largest contributor was labor-market related factors such as returns to land and experience in Bangladesh, returns to land in Peru, and returns to education and experience in Thailand. In other words, it is the increase in real earnings and higher productivity.

Furthermore, the study shows that a declining dependency rate accounted for over a fifth of the reduction in poverty in 10 countries (more impact in Paraguay and Costa Rica) and transfers and other non-earned incomes account for over a quarter of the reduction in poverty in 9 countries. The authors looked into the major factors that impact poverty: growth rate, redistribution, demographics, growth in labor income and growth in non-labor income. It doesn’t account for the impact of increase in access to and quality of public services that are not part of household income.

The non-labor incomes (as a result of targeted social protection programs) were relatively more important in accounting for changes in extreme poverty (US$2.5 a day) in Argentina, Brazil, Chile, Costa Rica, Ecuador, Romania and Thailand. 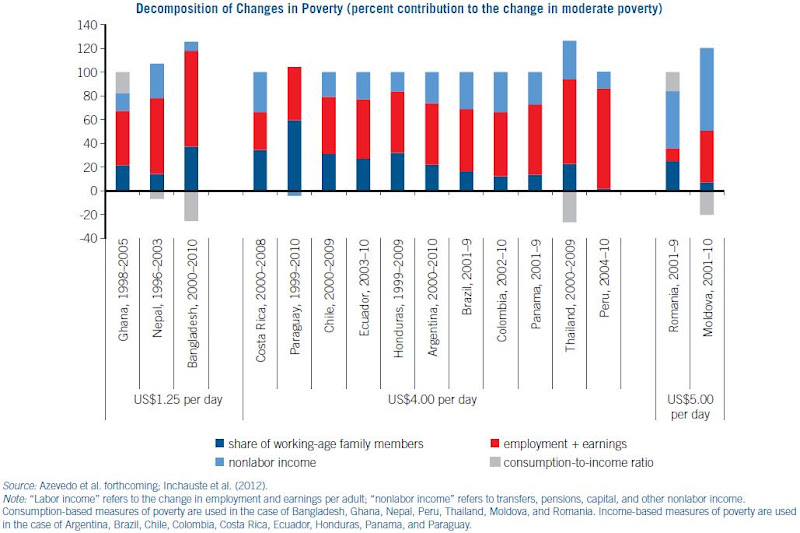 Interestingly, the study shows that, in Nepal, employment and earnings, followed by non-labor income (public transfers and remittances) and declining dependency rate, had the largest impact on poverty. In contrast to this finding, an analysis of poverty in Nepal between the same time period (1995/96 and 2003/04—first and second living standards surveys) done in 2006 by the World Bank showed that the increase in remittances contributed between one-third to one-half of overall reduction in headcount poverty rate (from 42 percent to 31 percent). There has been a drastic change in household consumption and income profile in Nepal since 2004. While 23.4% of households received remittances in 1996 and 31.9% of households in 2004, it increased to 55.8% in 2011.

The table below gives a snapshot of poverty, remittances and labor income in Nepal between 1995/96 and 2010/11.