Improved competitiveness of Nepali economy in 2013

The main reason for the improvement came from better ranking in macroeconomic environment (rank 41 from 56 last year) and health and primary education (rank 88 from 109 last year). The ranking in other pillars of competitiveness has deteriorated, especially labor market efficiency, in which Nepal is ranked 127 out of 144 countries. The worst ranking is in infrastructure (144 out of 144 countries).

The overall message is that while Nepal’s macroeconomic management has improved, which had positive impact on overall competitiveness, the quality of infrastructure relative to other countries has deteriorated. The reasons behind the improvement in macroeconomic management are very weakly related to the strengthening of the economic fundamentals. It has more to do with robust revenue growth hinged to remittance-fueled imports, the inability of the government to spend budget in time (thus low borrowing), rise in national savings due to high remittance inflows, etc.

Within infrastructure, Nepal ranks as follows:

Competitiveness is defined as “the set of institutions, policies, and factors that determine the level of productivity of a country”.The ranking is based on global competitiveness index, which comprises of 12 categories – the pillars of competitiveness – which together gives a picture of a country’s competitiveness landscape. The pillars are: institutions, infrastructure, macroeconomic environment, health and primary education, higher education and training, goods market efficiency, labor market efficiency, financial market development, technological readiness, market size, business sophistication and innovation.


In the survey result included in the same report, respondents identified government instability as the top problematic factor for doing business. The others are corruption, inefficient government bureaucracy, inadequate supply of infrastructure, policy instability, and restrictive labor regulations, among others. 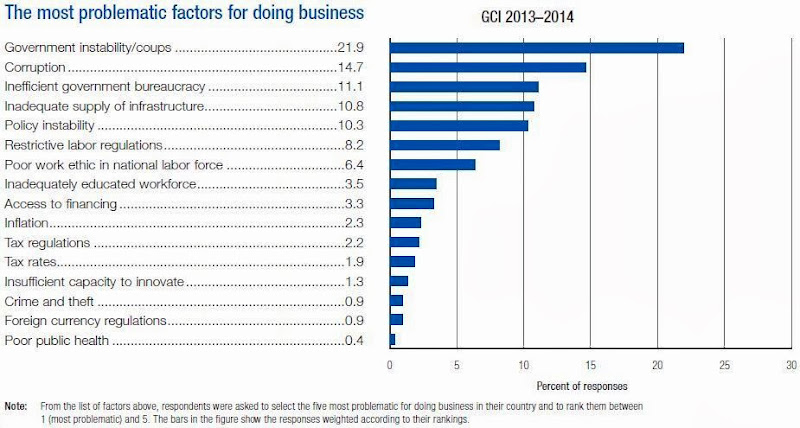 Posted by Chandan Sapkota at 4:26 PM No comments: