As per the constitutional provision, finance and planning ministers of the seven provinces presented their FY2019 budget to their respective provincial assemblies in mid-June. The budget envelope is very close to estimated federal fiscal transfer and revenue sharing. This is the first time the provinces have presented a full budget (earlier they presented a trimmed version of FY2018 budget wholly based on fiscal transfers from the federal government).

Province 1 has the highest budget, followed by province 3 and province 2. The provinces have used federal fiscal equalization and conditional grants as well as their share of federal revenue to cover recurrent and capital spending. Capital budget for provincial projects and recurrent budgets for social services (education, healthcare, etc) are pretty much dictated by the way the federal government allocates grants to them. Karnali is the sole province that has allocated spending under financial provision (which is generally used for internal loan and share investment in public enterprises or investment projects). Here is general budget envelope: 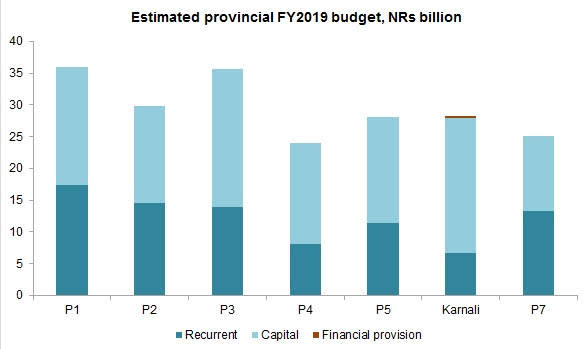 A substantial portion of the budget is allocated for capital spending (federal fiscal transfer constitutes almost all of the capital budget of five provinces). This in a way is consistent with the fiscal equalization and conditional grants from the federal government, which categorizes such spending as recurrent expenditure. So, the total size of the budgeted capital expenditure is going to increase now. Technically, this was the case before as well because sub-national governments were using them in capital projects, but this time there will be proper record of how much is spent at provincial level. There is such allocation for local governments too, but it may be difficult to aggregate their spending like in the case of the first two tiers of government. 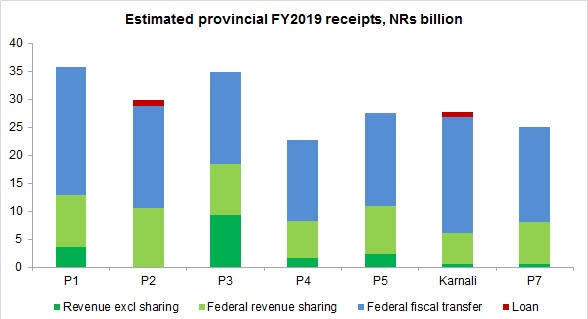 Provinces 2 and Karnali are planning to borrow about one billion rupees to finance budget deficit. It is not clear how exactly they are going to do it (or there are rules and regulations ready for them to do so). So, during the first year of operation itself, these two provinces are going to take loans to cover budget deficit.

Note that this is the first time the provinces are going to actually implement budget on their own, i.e. under their own jurisdiction and accountability mechanism. Previously, these were dictated by federal government. Now, the likelihood of effective and robust governance and accountability feedback is much higher. This should ideally get reflected as higher capital budget absorption rate (federal government’s track record in this is terrible). 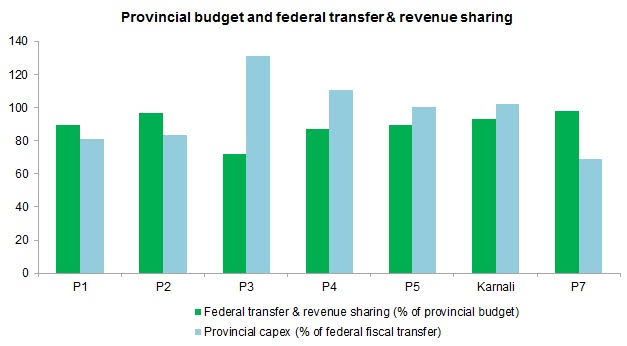 The size of provincial budget is small right now. These will increase as they gradually master the art of raising internal revenue and budget making. It would be interesting to see how they will implement their budget. But for that they will need a slew of subnational laws, policies, regulations and institutional frameworks. So expect under-spending for some years and messy implementation, planning and budget making process. Currently, the budget documents and speeches are either not well prepared following prescribed standard format or are similar to the federal budget speech (province 5 has a pretty good one though). The provincial budgets are truly distributive if we consider the size of their revenue.

Total budget allocation (federal and provincial) is as follows:
Here is an overview of FY2019 budget (more details here and here)
Posted by Chandan Sapkota at 12:33 PM No comments: