Despite having immense possibilities in manufacturing sector (large and relatively cost competitive workforce, domestic market, etc), India is still lagging behind and is not well integrated into global value chains. Manufacturing sector accounts for about 18% of GDP.

A recent ICRIER working paper asserts that the low integration into GVCs is due to the focus on domestic market, and the limited role played by lead firms. On a flipside, since India is less integrated in GVCs, it is also relatively less affected by the GVC disruptions caused by the COVID-19 outbreak. However, second round investment effects may still affect the Indian economy.

GVC forms the bedrock of trade in intermediate goods and services and fragmentation of production across factories and countries. Trade in intermediate goods account for about two-third of international trade. However, only a limited number of emerging economies take a lead in supplying intermediate inputs. Size of a country and natural resources endowment, skills and competitiveness, industrialization level and structure, exports composition, standards, policy and institutional environment (including trade and infrastructure) and the positioning in value chain determines how well a country is integrated in GVC.

The authors use findings from primary survey of 98 firms across six states conducted between August 2014 and February 2015 in India to argue that the reasons for low participation in GVC are policy focus on the domestic market and the weak lead firms, which essentially define the entire value chain (backward or forward linkages) and sales of final goods and services. Government policy also does not actively promote lead firms. They argue that in 2011 India’s domestic value added in exports was 20% (forward linkages) and foreign value added in gross exports was 25% (backward linkages). Participation index (a combination of the two indicators) was 40%. Unlike its competitors India is not heavily involved in international supply chains of countries such as Japan and the US.

Integration into and upgrading of GVC is industry-specific. For instance, in chemical industry transfer of production processes and knowledge of technical know-how is proprietary and upgrading requires direct investment in research and development. But in garment industry production processes are standardized and upgrading is enabled by the use of new inputs/raw materials. That said, also note that labor cost arbitrage accounts for only 18% of global goods trade, implying that knowledge-based trade of goods and services is crucial to stay competitive.

The chart below depicts integration and upgrading across sectors and the role of lead firms. 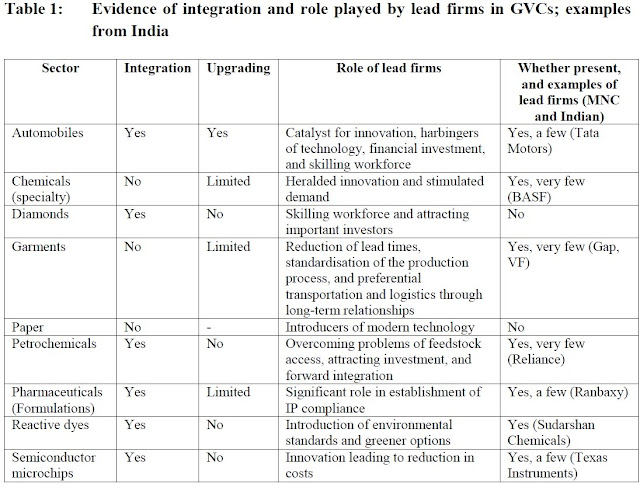 Lead firms speed up lead time (time between placing of order and delivery), standardize production process, and secure preferential transportation and logistics by forging long-term relationship.  They form a network of forward and backward linkages with micro, small and medium enterprises (MSMEs). Think of this one as MNCs such as Ford in automobile and Levi’s in garment. These lead firms nurture backward linked firms by helping them enhance production that meets global standards and is competitive. They do this by supplying product, market and technical information along with skills, specialization and innovation. Better integration into GVCs triggers structural transformation, whereby developing countries move from low value-added to high value-added production (both in terms of output and employment).

Based on the survey, the authors list some of the barriers to integrating into GVC. These include:
Here is an earlier blog post on services-driven global value chains.
Posted by Chandan Sapkota at 2:39 PM 2 comments: