After the hugely popular MGNREGA, which guarantees 100 days of employment per year to an adult member of  a below poverty line (BPL) household at a stipulated wage rate (equal to wage of manual agriculture worker), launched in 2006, the UPA government is launching another social protection program of a similarly massive scale: direct cash transfer of Rs 32,000 per family per year. This amount is almost three times the average annual earning of a BPL household.

The cash transfer will replace subsidies for kerosene, LPG, pension payments as well as wages from job guarantee schemes. Anyone familiar with the burden of subsidies and social protection payments in the developing world will realize how big and far-reaching the new reform initiative is going to be.

The welfare program is big on all counts: expected big multiplier impact as a result of cash transfers directly to poor household’s account, big central and state governments spending bill, big administration to implement the program, and big political step ahead of the election in 2014. Compared to MGNREGA, the new program is much, much more bigger (annually IRs 40,000 crore for MGNREGA against Rs 400,000 crore for cash transfers). The Indian government says that the cash transfer scheme will be "fiscally neutral" since existing indirect subsidies is to be replaced by direct cash transfers. Sounds incredible. Lets see how close they can get to the target of fiscal neutrality (India’s fiscal deficit is increasing and is a cause for concern for the MoF and the markets).

The program is to be launched on 1 January 2013 and expected to be completed by April 2014. The basis for cash transfer to BPL households is the Aadhar, which provides unique identification number to each resident and will enable them to, among others, open bank accounts where the government will directly transfer cash-- cutting middlemen, administration hassles and leakages.

Below is an infographic from The Times of India: 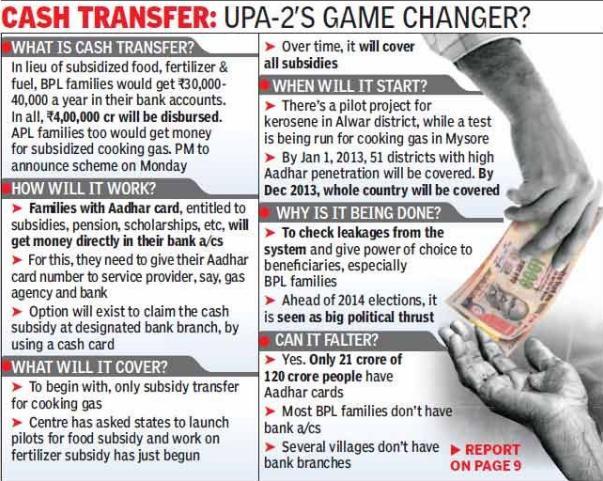 The upcoming challenge would be to ensure that the money is spent by BPL households to uplift their living standards or to move to a higher productive and efficient consumption and productive activities. Else spending the transferred money (usually by male head of household) in something that is not related to activities that contribute to enhancing welfare of the BPL household members is going to result in less than desired outcome from the massive social welfare intervention.
Posted by Chandan Sapkota at 10:31 AM No comments: