Lately, I have been wondering how Nepal would be divided when it goes for federal republic, which seems more certain than ever, especially after the Maoists won the CA election last month. Can the classification be based on geography or resources or any other standard? It is a very complex matter because a substantial chunk (almost 85%) of government revenue come from seven districts (Kathmandu, Parsa, Morang, Rupandehi, Jhapa, Sindhupalchok and Lalitpur). Other districts might have a daunting task maintaining fiscal balance.
More on this stuff from Dr. Shankar Sharma, former vice chairman of the National Planning Commission:

“In one sense, this eases the government's position, as it can provide tax holidays for developing and promoting industries in those districts without affecting overall collections. But, as far as fiscal transfers are concerned, they will put a big strain on the federal coffers, threatening overall economic stability,” he said.

Presenting a paper entitled “Evolving roles and fiscal challenges of federal Nepal”, Dr Sharma projected that the government could effectively rely on state and local governments to collect 18 to 20 percent of the total revenue.

“The remaining fiscal requirements will have to be met by the center,” he said.
Highlighting the cases of various federal countries, the paper says expenditure responsibilities of defense, foreign affairs, international trade, monetary policies, immigration, airlines and railways will rest on the central government.

“Expenditure responsibilities of environment, fiscal policy, natural resources management and utilization, industry and agriculture, police and standard and targeted programs can be assigned to states and local governments,” says the paper.
The paper, citing international practices, notes that customs duty, VAT and other taxes as well as revenue coming from natural resources and mining such as hydropower should go to the central government's coffers.

“A certain portion of the royalty can be given to the locality where such projects exist,” he said, adding that the collections made by the center would then have to be transferred to the states and local bodies considering their expenditure and program needs.

While highlighting the burden of transfer, Dr Sharma also laid emphasis on the need to make state and local governments accountable and maintain financial discipline.
“Provisions to this connection should be incorporated in the constitution itself,” he said, citing the case of Brazil where the constitution limits borrowing and indebtedness for state governments.

The following quotes are from a book "Ending Hunger Now: A Challenge to Persons of Faith" written by Bob Dole, George McGovern, and Donald E. Messer.

There is not a lack of food in the world, but a lack of political will and personal compassion. (Donald E. Messer, p3)

We act like ending hunger in an ethical option rather than a moral obligation.(Donald E. Messer p16)

Feeding the hungry of the world is not only morally right but is also technically possible. (Donald E. Messer, p89)

Posted by Chandan Sapkota at 10:30 PM No comments:

The opportunity cost of sending kids to school 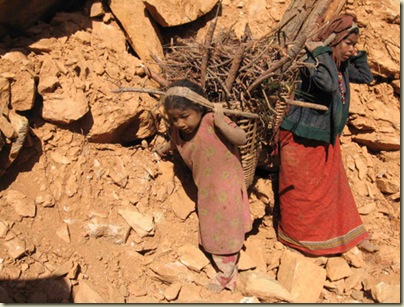 Posted by Chandan Sapkota at 11:29 AM No comments:

Nepal is going to face a 50% cut in petroleum products as the financially bankrupt Nepal Oil Corporation's stock is depleting because of short supply from the Indian Oil Corporation. The IOC is unwilling to supply more fuel because of huge outstanding dues NOC owes to it. Moreover, subsidies in petroleum products is increasing deficit in NOC's balance sheet. Removing price distortion in the market while not putting too much burden on poor people's meager income (also, preventing potential riots) will be a daunting task for the next Maoist-led government. Interesting time coming! Read the full news story here.

NOC supplies manager Mukunda Dhungel said the Corporation headquarters had directed its Thankot depot to distribute only 410 kl of petroleum products a day to the dealers from Sunday, while the demand stands at around 800 kl. “We had to take the harsh decision as we don’t have the money to finance regular import with the price of fuel surging in the international market,” Dhungel said.

An NOC source said the Corporation plans to import only 75,000 kl of oil this month as compared to 83,000 kl it imported last month.

The Corporation could release only INRs 640 million to the Indian Oil Corporation, the sole exporter, on May 2. Going by the prevailing prices in the international market, Nepal needs to pay around INRs 3.57 billion each month if it is to ensure smooth supply.

“Now the import depends on our capacity to finance it,” Dhungel said.On the other hand, NOC complains, as per the revised price of oil forwarded by the IOC on May 2, it would now incur a whopping loss of Rs 1.67 billion per month.

I have never seen such a scale of politicization and marriage between economics and politics (in a bad way!) in a state-owned corporation. NOC is in a dilemma, both ways it is in a worse-off situation. If subsidies are reduced, there will be riots and loss of NOC-owned property. Meanwhile, if prices are not upped, NOC will see further decline in the already rock-bottom credibility. More on this here.

Posted by Chandan Sapkota at 8:12 AM No comments:

(This is a very concise brief prepared from a series of field studies/visits and interviews conducted by Asia America Initiative (AAI) Philippines staff in the last couple of days. It briefly discusses the current crisis, causes, and future steps that can be taken to avert serious food crisis in impoverished places like Sulu, Jolo, and Cotabato in the Philippines.)

Potential upland rice farming could still be developed in some municipalities of Jolo to ease rice crisis in the future. Moreover, better coordination among organized farmers’ cooperatives, associations, and local business community could also help sort out supply bottlenecks. Planting is usually done two times (wet and dry season) a year. But due to limited credit/loans from the existing banks and the lack of modern agricultural equipment, actual output is below potential output.

The exact number of farmers requiring assistance is not yet determined but even a conservative estimate shows that a majority of the farmers need assistance of one form or the other. It usually depends on what kind and form of help agencies could bring to the farming community. In Sulu, where most of the farmers are tenants, an average farmer owns 0.5 to 1 hectare of land. The planting season is not yet over and if immediate steps are taken right now, we can still help increase productivity this season and help loose the strain in rice supply in the market.

Some highlights of rice crisis in Sulu, Jolo, and Cotabato:

Posted by Chandan Sapkota at 3:45 AM No comments:

Arvind Subramanian argues that though commitment to increase food aid is laudable, some hinges on that commitment like mandatory purchase and shipping from suppliers in the US limits the scope and reach of food aid. He also lays out some immediate and long term measures to avert this kind of crisis in the future.

...Starting now and over the next couple of years, the U.S. and other countries need to work together to ensure that world trade in agriculture is supportive of agriculture, as Nancy Birdsall and I argued in a recent Wall Street Journal op-ed, Food and Free Trade. That includes getting rid of inefficient biofuel subsidies; ensuring that countries don’t impose export restrictions (as several have done in the recent episode) since these aggravate food shortages; and injecting some rationality into the genetically modified organisms (GMO) debate, where the EU in particular has taken an extreme position that could be impeding the spread of agricultural productivity, especially in Africa.

In the long run, the international community needs to devote much more energy to figuring out how to spark a Green Revolution in Africa—the part of the world that is most vulnerable to food price increases.

...For example, between 2004 and 2007, when prices rose sharply, almost all the increase in maize production in the world—about 50 million tons—went into U.S. biofuel production. The fuel versus food conflict is suggested by the following statistic: the grain required to fill the tank of a sports utility vehicle with ethanol (240 kilograms of maize for 100 liters of ethanol) could feed one person for a year. So, if all the U.S. biofuel production had gone into feeding mouths rather than Hummers, you are talking about a lot less hungry people. Africa expert Paul Collier calls the U.S. ethanol mandate and subsidies program “grotesquely inefficient” in today’s Financial Times

Posted by Chandan Sapkota at 3:31 AM No comments: