But this is a Keynesian situation...

Martin Wolf blasts OECD's report, which myopically argues that  "a weak fiscal position and the risk of significant increases in bond yields make further fiscal consolidation essential. But, we are not in a normal situation. This is a Keynesian time.

Above all, the private sector is forecast by the OECD to run a surplus – an excess of income over spending – of 10 per cent of GDP this year. On a consolidated basis, the UK’s private surplus funds nearly 90 per cent of the fiscal deficit. Thus, fiscal tightening would only work if it coincided with a robust private recovery. Otherwise, it would drive the economy into deeper recession. Yes, that is a Keynesian argument. But this is a Keynesian situation.

I agree that there needs to be a credible path for fiscal consolidation that would lead to a balanced budget, if not a surplus. That will be essential if the UK is to cope with an ageing population in the long term. I agree, too, that the path needs to be spelled out. Given the high ratios of spending to GDP – close to 50 per cent – the best way to proceed is via tight, broad-based, long-term control over expenditure. But a substantially faster pace than envisaged by the last government might threaten recovery: the OECD, for example, forecasts economic growth at 1.3 per cent this year and 2.5 per cent in 2011. Even this would imply next to no reduction in excess capacity.

Posted by Chandan Sapkota at 7:48 PM No comments:

Is Nepal “a yam between two boulders”?

Excerpts from a Foreign Affairs article on the influence of India and China in Nepalese political and economic spheres.

The Nepali crews that inch closer to China, bringing heavy trucks to a valley that has known only foot traffic, are at the forefront of a potentially major strategic shift in the region: Nepal, long a dependable ally and client of India, is building economic and political ties with China. Good roads are just one sign of this relationship and, as Rhoderick Chalmers, an International Crisis Group analyst in Kathmandu, explained to me, could "prevent India from using its ultimate sanction of economic blockade on Kathmandu." If China can begin supplying many of the goods that Nepal now receives from India -- especially petrol, diesel, and kerosene -- then India's leverage would be severely limited.

Although one new highway will not in itself push Nepal from India's sphere of influence -- history, economics, and above all, geography will see to that -- the mere fact that India may one day have to compete for Nepal's attention is a sign of Kathmandu's political reorientation. In 2006, as Nepal's monarchy teetered, Maoist leaders and pro-democracy parties signed a comprehensive peace agreement ending a decade-long civil war. Since then, Kathmandu has been building a nascent democracy while wedged in a proxy battle between China and India -- with the United States and Europe watching closely.

As Nepal inches toward a draft constitution and lasting peace deal, it is counting on India, its longstanding patron and a fellow Hindu-majority state. New Delhi remains Kathmandu's biggest supplier of essential goods, including gasoline, and the Nepalese are addicted to Indian films, music, and other forms of pop culture. Although new roads in Nepal's northern reaches may one day extend the country's economic linkages to China, for now the majority of all trade flows are to and from India in the south.

China's renewed interest in its southern neighbor is not entirely a quid pro quo. In Kathmandu, mobs of Chinese tour groups visit the tourist enclave of Thamel, where they frequent Chinese-run restaurants, bookstores, and hospitals. Meanwhile, Chinese cultural centers are popping up across the country, notably in the Terai, along Nepal's southern border with India. According to the Chinese embassy in Nepal, projects such as the Birendra International Convention Center -- a gleaming complex near Kathmandu's international airport -- and the capital city's main highway are evidence that "China treats Nepal as its closest neighbor and best friend."

Although the above initiatives aim to signify the softer side of Chinese-Nepali ties, China ultimately appears most interested in stifling "anti-Chinese" activities on Nepal's soil. And given China's single-minded focus, Communist Party leaders in Beijing seem less concerned with Kathmandu's political jockeying than with ensuring that the next government is as pliant as the current one. One strategy, analysts suggest, has been to focus fewer resources on national politics and more on localized economic aid, such as building schools in politically sensitive border areas. Although China may consider a return of communist governance ideal, its principal concern is stability. "For China, the ideological difference doesn't make any difference," said Dhungel, the presidential adviser. "They had very good relations with the king. They had a very good relationship with the Nepali Congress. And I think they will have relations with whoever emerges as a stable force."

Posted by Chandan Sapkota at 11:26 AM No comments:

This is a summary of Anna McCord’s paper (International PWP Comparative Study) on some of the major public works programs/social safety nets in the world.

PWPs are implemented under two broad labor market situations: (i) acute, short term fall in labor demand or livelihoods disruption (resulting from drought, flood, financial crisis or recession); and (ii) chronic high levels of under- or un-employment and poverty.

Broadly there are four types of objectives of social protection programs:

Usually large scale social protection programs, such as AGETIP, fail to attain substantial coverage and suffer from limited impact and seemingly inappropriate conception and design. NREGA avoids this danger of form over substance, in part due to close scrutiny to which it is subjected as a consequence of the highly organized role of civil society in monitoring anti-poverty interventions.

For measurement of the effectiveness of PWPs, the microeconomic impact of program participation (current and future earning and/or reemployment prospects) and the macroeconomic impact (net effect on aggregate employment and unemployment) are evaluated. The effectiveness of a PWP intervention in terms of its contribution to social protection is contingent on the appropriate duration of employment and the extent to which it enables livelihoods protection and/or accumulation to take place.

PWPs that are more likely to be successful in alleviating poverty in the context of persistently high levels of unemployment and poverty provide a guarantee of ongoing or repeated episodes of employment on a massive scale. Some form of job guarantee is included in the program.

Social protection consists of all initiative that provides income (cash) or consumption (food) transfers to the poor, protect the vulnerable against livelihood risks, and enhance the social status and rights of the excluded and marginalized. (see Devereux and Sabates 2004). The World Bank considers risk coping, risk mitigation and risk reduction as key components of social protection.

Social protection can be carried out through wage transfer (cash, food or inputs), asset benefits, and training or work benefits. 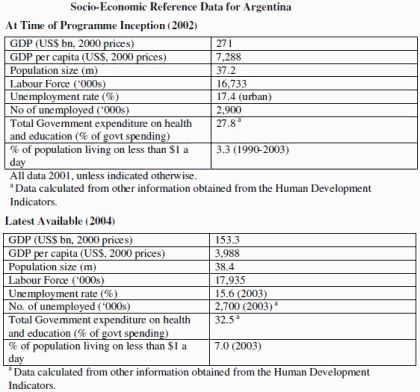 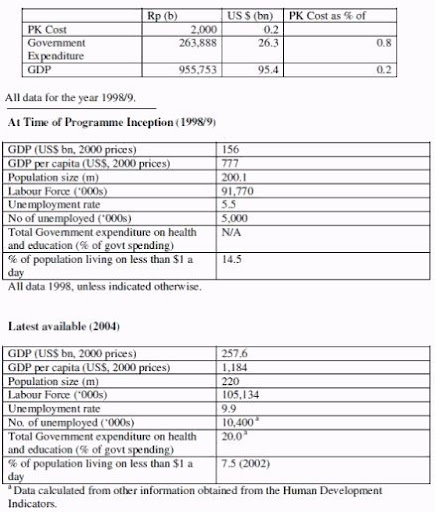 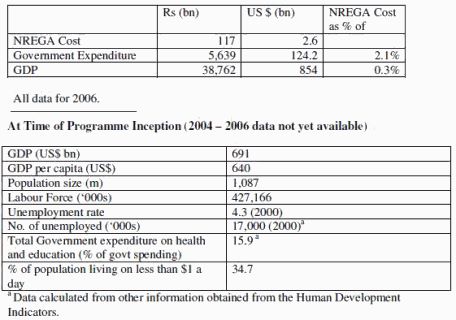 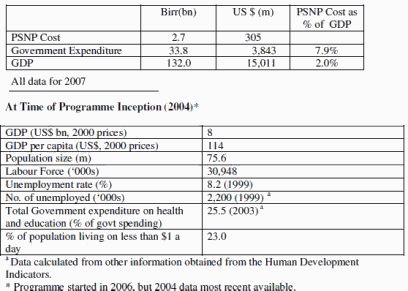 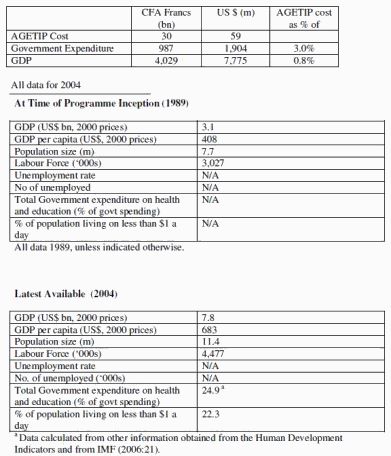 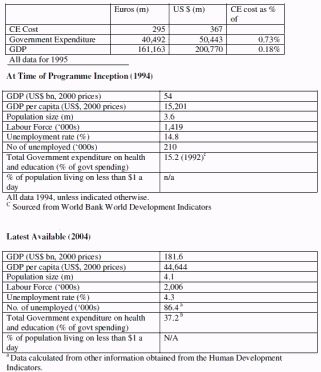 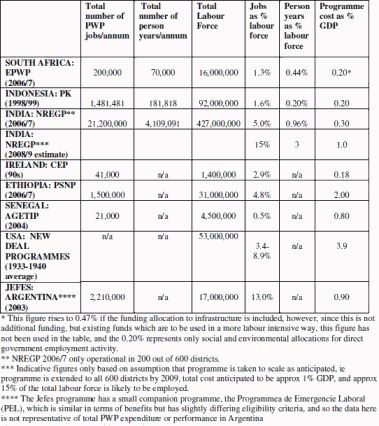 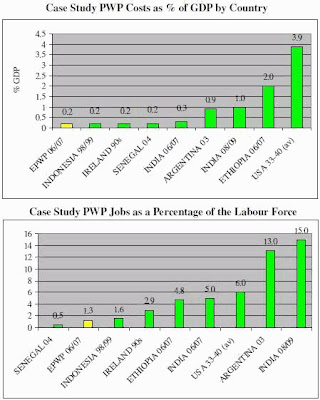