Improvement in competitiveness of Nepali economy in 2011-2012?

Switzerland tops the overall rankings. Singapore overtakes Sweden for second position. Northern and Western European countries dominate the top 10 with Sweden (3rd), Finland (4th), Germany (6th), the Netherlands (7th), Denmark (8th) and the United Kingdom (10th). Japan remains the second-ranked Asian economy at 9th place, despite falling three places since last year.The United States continues its decline for the third year in a row, falling one more place to fifth position. In addition to the macroeconomic vulnerabilities that continue to build, some aspects of the United States’ institutional environment continue to raise concern among business leaders, particularly related to low public trust in politicians and concerns about government inefficiency.

The bottom five countries in the ranking are Chad, Haiti, Burundi, Angola and Yemen.

The report argues that “while competitiveness in advanced economies has stagnated over the past seven years, in many emerging markets it has improved, placing their growth on a more stable footing and mirroring the shift in economic activity from advanced to emerging economies.”

The People’s Republic of China (26th) continues to lead the way among large developing economies, improving by one more place and solidifying its position among the top 30. Among the four other BRICS economies, South Africa (50th) and Brazil (53rd) move upwards while India (56th) and Russia (66th) experience small declines. Several Asian economies perform strongly, with Japan (9th) and Hong Kong SAR (11th) also in the top 20.

Though the five position improvement in ranking looks like good news, it actually is regaining the same ranking as in 2009-2010 (though an improvement in overall score by 0.5 points). Also, the inclusion of new countries with lower competitiveness might have pushed down (or improved) Nepal’s ranking. In 2009-10, Nepal’s ranking was 125 out of 133 countries; in 2010-11, the ranking was 130 out of 139 countries; and in 2010-11, the ranking is 125 out of 142 countries. But still, this is an improvement over last year’s ranking. 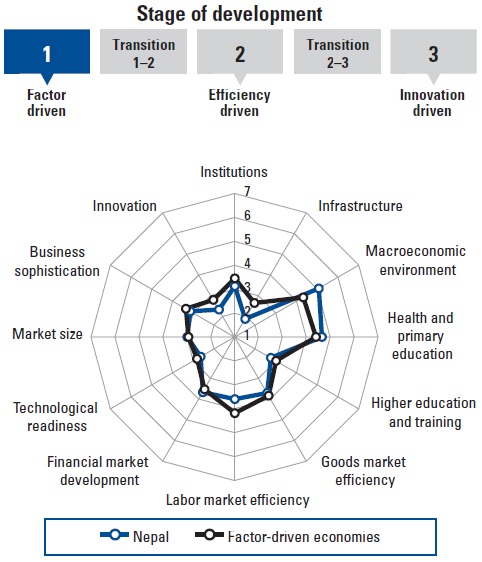 In the survey of business sector, government instability is identified as the most problematic factor of doing business in Nepal. It is followed inefficient government bureaucracy, policy instability, corruption, inadequate supply of infrastructure, and restrictive labor regulation, among others. 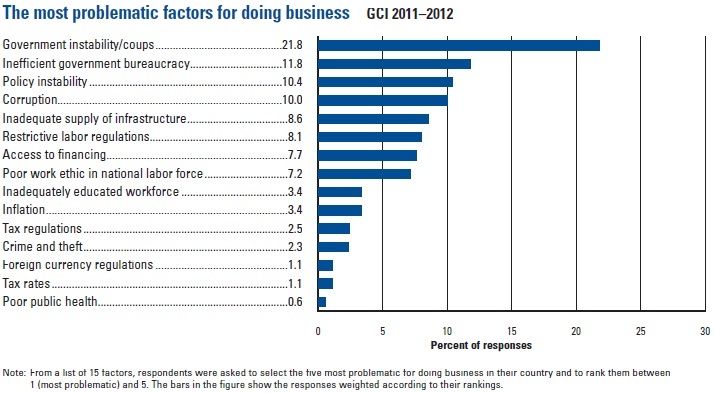