This paper revisits the cross-country growth empirics debate using a novel Limited Information Bayesian Model Averaging framework to address model uncertainty in the context of a dynamic growth model in panel data with endogenous regressors. Our empirical findings suggest that once model uncertainty is accounted for there is strong evidence that initial income, investment, life expectancy, and population growth are robustly correlated with economic growth. We also find evidence that debt, openness, and inflation are robust growth determinants. Overall, the set of our robust growth determinants differs from those identified by other studies that incorporate model uncertainty, but ignore dynamics and/or endogeneity. This underscores the importance of accounting for model uncertainty and endogeneity in the investigation of growth determinants.

More here
Posted by Chandan Sapkota at 10:47 PM No comments:

Paul Samuelson (1915-2009) requires no introduction among people studying economics. He will be sorely missed! 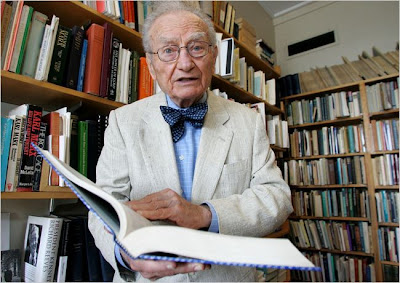 Extracts from an obituary published in the NYT below:

His textbook taught college students how to think about economics. His technical work — especially his discipline-shattering Ph.D. thesis, immodestly titled “The Foundations of Economic Analysis” — taught professional economists how to ply their trade. Between the two books, Mr. Samuelson redefined modern economics.

The textbook introduced generations of students to the revolutionary ideas of John Maynard Keynes, the British economist who in the 1930s developed the theory that modern market economies could become trapped in depression and would then need a strong push from government spending or tax cuts, in addition to lenient monetary policy, to restore them. No student would ever again rest comfortably with the 19th-century nostrum that private markets would cure unemployment without need of government intervention.

That lesson was reinforced in 2008, when the international economy slipped into the steepest downturn since the Great Depression, when Keynesian economics was born. When the Depression began, governments stood pat or made matters worse by trying to balance fiscal budgets and erecting trade barriers. But 80 years later, having absorbed the Keynesian preaching of Mr. Samuelson and his followers, most industrialized countries took corrective action, raising government spending, cutting taxes, keeping exports and imports flowing and driving short-term interest rates to near zero.

Remarkably versatile, Mr. Samuelson reshaped academic thinking about nearly every economic subject, from what Marx could have meant by a labor theory of value to whether stock prices fluctuate randomly. Mathematics had already been employed by social scientists, but Mr. Samuelson brought the discipline into the mainstream of economic thinking, showing how to derive strong theoretical predictions from simple mathematical assumptions.

Early in his career, Mr. Samuelson developed the rudimentary mathematics of business cycles with a model, called the multiplier-accelerator, that captured the inherent tendency of market economies to fluctuate. The model showed how markets magnify the impact of outside shocks and turn, say, an initial one-dollar increase in foreign investment into a several-dollar increase in total domestic income, to be followed by a decline.

In a famous theorem, known as Stolper-Samuelson, he and a co-author showed that competition from imports of clothes and similar goods from underdeveloped countries, where producers rely on unskilled workers, could drive down the wages of low-paid workers in industrialized countries.

Mr. Samuelson also formulated a theory of public goods — that is, goods that can be provided effectively only through collective, or government, action.

His “correspondence principle” showed that information about the stability or instability of a theoretical economic system — whether, after a disruption, the economy returns to fixed levels of prices and output or, instead, flies out of control — could be used to predict the aggregate outcome of decisions taken by consumers and business firms. He showed, for example, that only a stable economic system would undergo ordinary business cycles like those captured by Mr. Samuelson’s multiplier-accelerator model.

He also helped develop linear programming, a mathematical tool used by corporations and central planners to calculate how to produce pre-set levels of various goods and services at the least cost.

Mr. Samuelson wedded Keynesian thought to conventional economics. He developed what he called the Neoclassical Synthesis. The neoclassical economists in the late 19th century showed how forces of supply and demand generate equilibrium in the market for apples, shoes and all other consumer goods and services. The standard analysis had held that market economies, left to their own devices, gravitated naturally toward full employment.

Mr. Samuelson’s resulting “synthesis” amounted to the notion that economists could use the neoclassical apparatus to analyze economies operating near full employment, but switch over to Keynesian analysis when the economy turned sour.

But Mr. Samuelson regarded the teaching at Chicago as “schizophrenic.” This was at the height of the Depression, and courses about the business cycle naturally talked about unemployment, he said. But in economic-theory classes, joblessness was not mentioned.

Here is the last paper Samuelson wrote about Hayek and the epic, unsettling battle of ideas in economics.

Here is Krugman on Samuelson:

It’s hard to convey the full extent of Samuelson’s greatness. Most economists would love to have written even one seminal paper — a paper that fundamentally changes the way people think about some issue. Samuelson wrote dozens: from international trade to finance to growth theory to speculation to well, just about everything, underlying much of what we know is a key Samuelson paper that set the agenda for generations of scholars.

Posted by Chandan Sapkota at 4:42 AM No comments: