The HDI value for Nepal is 0.553, placing it in 144 position out of 182 countries included in the study. The higher the index value, the better is human development in a given country. The report notes that between 1980 and 2007 Nepal's HDI rose by 2.16% annually from 0.309 to 0.553 today. HDI scores in all regions have increased progressively over the years although all have experienced periods of slower growth or even reversals. The HDI is a broader measure of well being, as opposed to using GDP figures. This is how Nepal stands in HDI and GDP per capita. 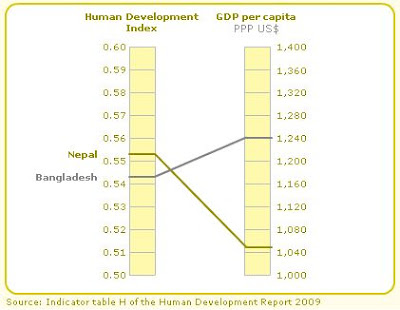 In Human Poverty Index (HPI), Nepal ranks 99th among 135 countries for which the index has been prepared.

In Gender-related Development Index (GDI), Nepal scored a value of 0.545. Its GDI value is 98.6% of its HDI value. Out of the 155 countries with both HDI and GDI values, 111 countries have a better ratio than Nepal's. Meanwhile, Nepal ranks 83rd out of 109 countries in Gender Empowerment Measure (GEM), which reveals whether women take an active part in economic and political life.

Nepal has an emigration rate of 3.9%. The major continent of destination for migrants from Nepal is Asia with 95.0% of emigrants living there. In 2007, US$1,734 million in remittances were sent to Nepal. Average remittances per person were US$61, compared with the average for South Asia of US$33.

There is a whole lot of improvement to do in human development front. The mediocre index value for some years now shows that there has not been enough progress in several fronts. Still, 11 percent of the population do not survive beyond 40 years of age. More worrisome fact is that 39 percent of children (aged under 5) are malnourished/underweight. Moreover, the progress made in adult literacy is not satisfactory. The report shows the human development level in 2007.
It is no wonder that the political turmoil and confusion arising from cessation of bloody Maoist insurgency, which claimed over 14000 lives, in 2006/07 overshadowed the need to look after the indicators used in the HDI. Progressive legislation to boost women’s and minority group’s participation in the political process have been passed. We need to see how far it will help bridge the gap between gender progress in Nepal. Moreover, lately the donors have been coordinating funding for education sector. This should help in increasing literacy rates as well.

If the political process continues to be as messy as it is today, then once again the human development goals would be overshadowed and progress on these fronts stalled. As of today, stalemate in finding a solution to the political impasse has been the most binding constraint to forging a national strategy to make progress in human development fronts.