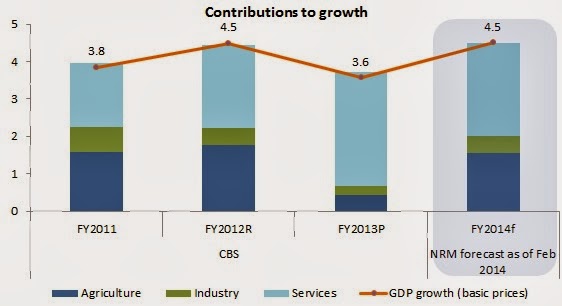 The positive political outlook, expected increase in agriculture production following the favorable monsoon, modest improvement in capital expenditure following the timely full FY2014 budget, and a strong services sector performance supported by remittance income are expected to boost GDP growth (at basic prices) to 4.5% in FY2014, up from 3.6% in FY2013. However, the forecast is lower than the government’s 5.5% target due to the less than expected increase in capital spending and a slightly lower services sector. In addition to the improvements in agriculture production, both domestic and foreign investment commitments increased remarkably in the first half of FY2014.

Despite the timely full budget, expenditure performance was not satisfactory in the first half of FY2014. Of the total planned expenditure of NRs.517.2 billion, only 30.3% was spent largely due to the lower than expected capital spending. The slow pace of spending so far indicates that the capital budget will likely continue to be underspent as in the previous year. If the utilization of the capital budget remains at the same level as in FY2013 (81% of total planned capital expenditure), then the total capital spending in FY2014 is projected to be about 3.5% of GDP, lower than the 4.4% of GDP projected in the budget but slightly higher than 3.1% of GDP in FY2013. There is an urgent need to ramp up both the quantum and quality of capital spending as it not only ‘crowds in’ private investments, but also helps create the foundations for the lackluster growth to take off on an employment-centric, high, inclusive and sustainable growth path. 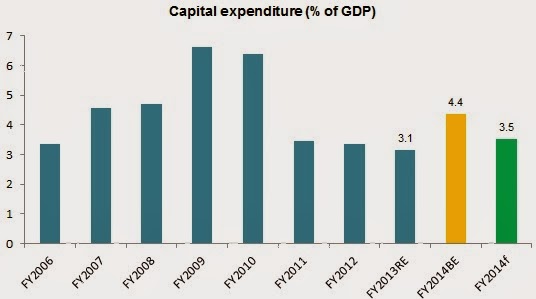 Even though the NRs163.4 billion mobilized in the first half of FY2014 is 21.5% higher than the revenue mobilized in the corresponding period in FY2013, it still is lower than the half year target set for this fiscal year. As a share of total targets, customs, value added tax (VAT), excise, land registration and income tax mobilization up to mid-year stood at 46.8%, 46.6%, 47.6%, 52.3% and 44.4%, respectively. Since import-based revenues account for around 45% of total revenue, the yearly revenue target may not be met as the depreciation of the Nepalese rupee against the dollar is slowing down import demand. 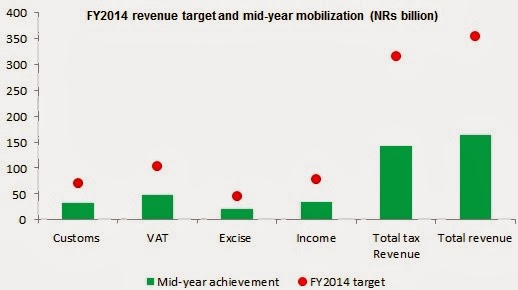 Inflation averaged 9.1% in the first half of FY2014, down from 10.7% in the corresponding period in FY2013. Inflation moderated in all the six months of FY2014 compared to their corresponding months in FY2013. The decline in prices is mainly driven by the sharp slowdown in non-food and services prices. However, the persistence of the high inflation level is supported by rising food and beverage prices, which averaged 11.5% in the first half of FY2014 against 9.8% in the same period in FY2013. Despite the expected improvement in agriculture harvest, the wage pressures, the persistently high price level in India, the rise in administered fuel prices, lower interest rates, the persistently weak Nepalese rupee and the supply-side constraints, average annual CPI inflation in FY2014 is forecast at 10.0%, higher than the government’s target of 8.5%. 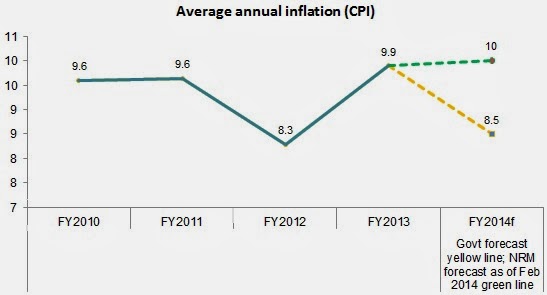 Money supply increased by 9.0% in the first half of FY2014, higher than 4.8% in the corresponding period in FY2013, due to the large increase in remittance inflows and foreign assistance, which boosted net foreign asset holdings. The increase in money supply was reflected in the 8.9% growth of narrow money (M1) and 5.5% growth of time deposits. The increasing remittance inflows and the election related expenditures increased deposit mobilization by 8.0% in the first half of FY2014, up from 5.3% in the corresponding period of FY2013. However, lending growth slowed to 7.3%, from 10.7% in mid-January 2013, as credit to private sector fell given the lack of immediate bankable investment projects and the cap on lending to certain sectors. The large liquidity surplus in the banking system led to lower interest rates compared to the level in mid-January 2013. Proper management of excess liquidity is essential to ensure that hasty and risky lending does not fuel bubbles in key sectors, including the residential housing market. As investor’s confidence rebounded and excess liquidity prevailed, the Nepal Stock Exchange (NEPSE) index increased sharply by 143.2% (787.1 points) in mid-January FY2014, up from a decrease of 19.7% (323.6 points) in mid-January FY2013.

The country’s external situation strengthened on the back of a large increase in remittance inflows, gains in exports and a slowdown in imports. In the first half of FY2014, the balance of payments surplus increased to $788.1 million, up from $89.3million in mid-January in FY2013. The merchandise trade deficit widened to $2.8 billion, up from $2.6 billion in mid-January 2013. However, the surge in remittance inflows pushed the current account surplus to $554.6 million, sharply up from $50.7 million in the first half of FY2013. Gross foreign exchange reserves increased from $5.5 billion in FY2013 to $6.3 billion in mid-January 2014, sufficient to cover 10.2 months of import of goods and non-factor services.

This edition of Macroeconomic Update’s Issue Focus explores the various dimensions of Nepal’s export competitiveness. Given the country’s poor export performance so far, it is clear that Nepal has been unable to fully utilize the market access and tariff concessions offered by trading partners, primarily due to crippling supply-side constraints. These include the lack of adequate and quality infrastructure; political instability and strikes; recurring labor disputes; lack of skilled human resource; deficient research and development; and policy inconsistencies and implementation paralysis. The country needs to properly utilize the technical assistance offered through various financing windows by multilateral and regional trading blocs, and development partners. This will help boost private sector activities in export-oriented sectors, which is mostly dominated by small and medium enterprises. In the long term, along with improvements in the investment climate, the government will need to substantially increase investment in energy, transport corridors, skills development, technology transfer and adoption, supportive regulatory and institutional frameworks including SEZs, and overall stable macroeconomic environment. These are critical for product and market diversification as well as product sophistication to stay competitive and to make exports an important driver of inclusive growth, which is essential to absorb an estimated 633,000 new entrants annually to the job market by 2020.

(This is adapted from executive summary of Nepal Macroeconomic Update, February 2014, Vol.2, No.1, published by ADB.)
Posted by Chandan Sapkota at 10:43 AM No comments: