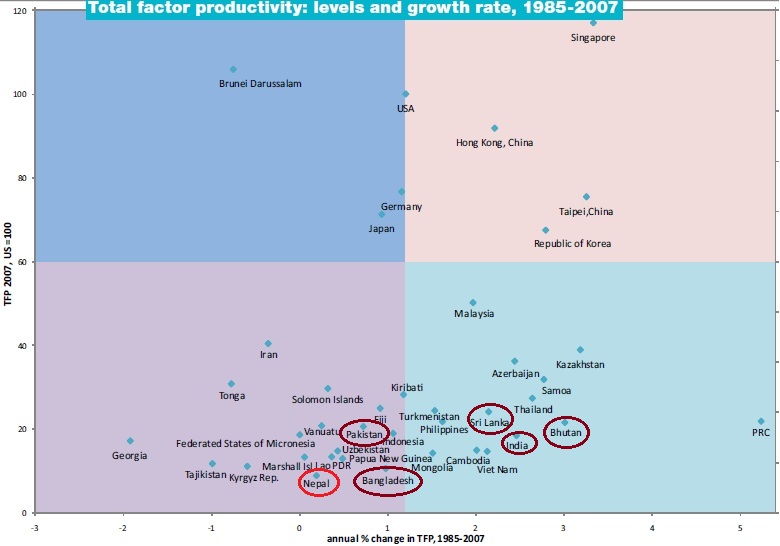 The figure shows total factor productivity (TFP) in 2007 and TFP growth (annual percent change) over 1985-2007. Nepal (in red circle) has the lowest TFP in South Asia (and in Asia). TFP of other South Asian countries is indicated by brown circle in the chart. The countries with high TFP are the ones the frontier economies (with high and sustained growth rate and per capita income) where entrepreneurship and innovation occurred.

The South Asia countries in the fourth quadrant shows that there is little TFP growth and are not competitive (plus low growth rate, low per capita income, low innovation and lack adequate entrepreneurship). Bhutan’s TFP growth is the highest in South Asia. India’s TFP growth rate is also impressive in South Asia. First, India succeeded in catch-up entrepreneurship and subsequently added frontier entrepreneurship to its development toolkits. More explanation in this recently released ADB (draft) report (Asia 2050 — Realizing the Asian Century). Frontier entrepreneurship requires substantial government support and intervention (because of extraordinarily long gestation period). India did this in the education sector (with the establishment of IITs and IIMs) and in the pharmaceutical industry in the early 1970s.

Government intervention is sought in areas of “human capital development through quality education at all levels; a commitment to science, technology and R&D; the rule of law with an effective regime for intellectual property rights as well as for exit/bankruptcy; the availability of financing for entry and the subsequent phases of entrepreneurial activity; and an overall policy framework that is based on competition and rewards innovation.”

Meanwhile, the draft report argues that the global economy’s center of gravity is shifting toward Asia, and the region could account for about half of global output in 2050, up from the current 27%, as well as half of global trade and investment. It the potential outcomes for Asia under two competing scenarios: the Asian Century and the Middle Income Trap.

In the more optimistic Asian Century scenario, the region’s gross domestic product (GDP) would soar to $148 trillion and account for 51% of global output in 2050. On a purchasing power parity basis, GDP per capita in Asia would rise to $38,600, compared with the projected 2050 global average of $36,600. The alternative scenario assumes that Asia’s fast-growing economies—the PRC, India, Indonesia, and Viet Nam—will fall into the middle income trap of slowing growth rates and stagnating income levels over the next 5 to 10 years. Furthermore, none of Asia’s slow-growing economies would manage to accelerate its growth rate under this scenario. If these events occur, Asia would account for only 32%, or $61 trillion, of global GDP in 2050. On a purchasing power parity basis, GDP per capita would rise to only $20,300, or just over half of that under the Asian Century scenario.

The report identifies six key drivers of transformation in the region:

The challenges of Asia include modernization of its governance systems and retooling of its institutions to ensure transparency, accountability, and the enforceability of rules and regulations. It advises Asian leaders to devise bold and innovative national policies while pursuing regional and global cooperation to successfully manage regional public goods, energy security, infrastructure connectivity, food supplies and water resources, and to maintain long-term peace and stability.