Tourist arrivals by month in Nepal 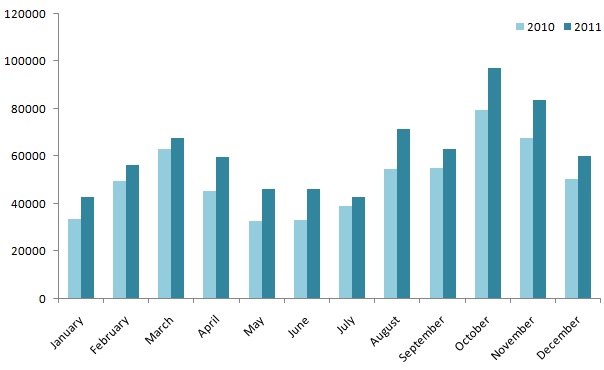 Here is the number of tourist arrivals via the main entry points:

Now, where do you think should the government upgrade tourism infrastructure? Undoubtedly, the only international airport and the border points from where a high number of tourists enter Nepal. The infrastructure and services inside and outside of the airport is pretty horribly despite paying premium prices when compared to the cost of using similar infrastructure, services, and security in other developing countries. No wonder Nepal’s tourism industry is uncompetitive and ranked 112 out of 139 economies in the latest Travel & Tourism Competitiveness Index (TTCI). In terms of tourism infrastructure (including hotel rooms) and ground transport, Nepal ranked 130 and 135, respectively, out of 139 economies in TTCI 2011. In terms of safety and security in tourism industry, Nepal ranked 127 out of 139 economies. Meanwhile, with appropriate infrastructure and services industry, the border areas (mainly Bhairahawa for Indian tourists and Kodari for Chinese tourists) can see robust tourism activities and expenditure before the tourists embark on trips to popular tourist destinations in the country.