Here is my quick thought on the FY2017 budget.

Finance Minister Bishnu Prasad Poudel presented budget for FY2017 (mid-July 2016 to mid-July 2017) to the parliament on May 29. The budget is focused on distributive programs, post-earthquake reconstruction and measures to diversify the economy through the provision of critical infrastructure (preliminary funds earmarked for key priority projects for preparatory work).

The budget is kind of unique in two ways: (i) a massive increase in spending targets with the inclusion of pet programs/projects that will have budgetary and macroeconomic consequences for years to come, and (ii) there is no notable plan to accelerate capital spending (without which the promises will remain a daydream). 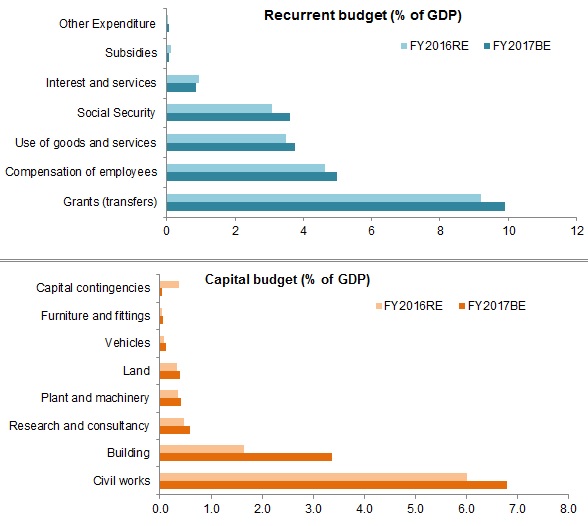 The budget deficit is to be financed by foreign loans amounting to NRs195.7 billion, domestic borrowing of NRs111.0 billion, and FY2016 cash balance of NRs59.4 billion. Net foreign loans and net domestic borrowings are projected to be 6.4% and 3.5% of GDP, respectively. Overall, budget deficit is projected to be about 7.0% of GDP.

Fourth, where is the recurrent budget going?

Almost 43% of planned recurrent expenditure of NRs617.2 billion is going to local bodies as grants (or transfers) to enable them to launch local level development works on their own (this is where pet projects and politically hinged programs are hidden). The other big ticket item is the compensation of employees, which takes up about 21% of total recurrent budget. These amount to an estimated 9.9% and 5.0% of GDP respectively.

Fifth, where is the capital budget going?

Almost 58% of the planned capital budget of NRs311.8 billion is going for civil works. About 29% is allocated for building work. These amount to an estimated 6.8% and 3.4% of GDP, respectively.

Sixth, the main takeaways from FY2017 budget are: 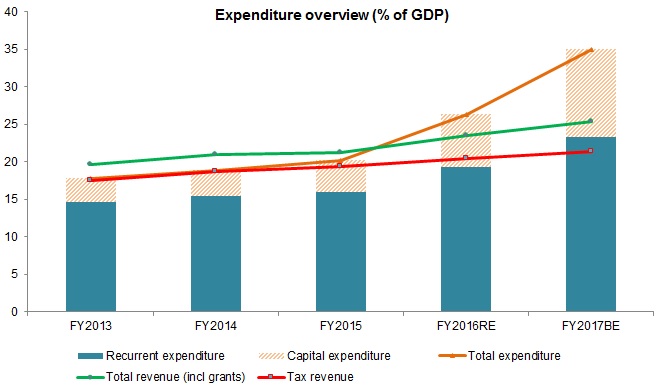 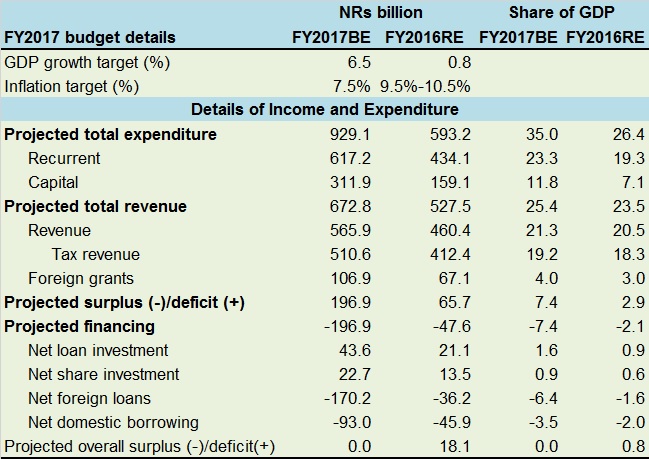 Posted by Chandan Sapkota at 11:05 PM