The World Bank recently revised its poverty estimate and upped the number of poor people living with less amount than standard basic requirements required to live a life. According to new estimate computed by considering the rising cost of living and using updated poverty data from countries, the WB researchers have set an international poverty line equal to $1.25 a day (at 2005 PPP). Now, over one billion people (1,399.6 to be exact) are living under extreme poverty, according to a recent updated estimate by WB researchers Ravallion and Chen. The Asian Development Bank recently came up with its own Asian Poverty Line of $1.35, according to which 800 million people live in poverty in Asia alone. 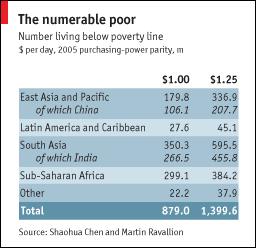 More on this from The Economist:

The researchers now prefer a yardstick more typical of the 15 poorest countries that have credible poverty lines. By this definition, people are poor if they cannot match the standard of living of someone living on $1.25 a day in America in 2005. Such people would be recognised as poor even in Nepal, Tajikistan and hard-pressed African countries such as Uganda. But for those who still think a “dollar a day” has a better ring to it, the authors also calculate the number of people living on less than that at 2005 prices (see table).

The discovery of another 400m poor people will not satisfy some of the bank’s critics, who think it still undercounts poverty. Its cost-of-living estimates are based on the prices faced by a “representative household”, whose consumption mirrors national spending. But the poor are not representative. In particular, they buy in smaller quantities—a cupful of rice, not a 10-kilogram bag; a single cigarette, not a packet. As a result, the “poor pay more”.

Such concerns prompted the Asian Development Bank (ADB) to carry out its own study of the prices faced by the poor in 16 of its member countries (not including China). Its results, released on August 27th, found that in nine of those countries the poor in fact pay less. Even though they buy in smaller quantities, they save money by buying cut-price goods from cheaper outlets: kerbside haircuts not salons; open-air stalls not supermarkets; toddy not wine.

Here is the paper (The developing world is poorer than we thought, but no less successful in the fight against poverty) by Chen and Ravallion. Below is a summary of the paper:

The paper presents a major overhaul to the World Bank's past estimates of global poverty, incorporating new and better data. Extreme poverty-as judged by what "poverty" means in the world's poorest countries-is found to be more pervasive than we thought. Yet the data also provide robust evidence of continually declining poverty incidence and depth since the early 1980s. For 2005 we estimate that 1.4 billion people, or one quarter of the population of the developing world, lived below our international line of $1.25 a day in 2005 prices; 25 years earlier there were 1.9 billion poor, or one half of the population. Progress was uneven across regions. The poverty rate in East Asia fell from 80% to under 20 percent over this period. By contrast it stayed at around 50 percent in Sub-Saharan Africa, though with signs of progress since the mid 1990s. Because of lags in survey data availability, these estimates do not yet reflect the sharp rise in food prices since 2005.

Posted by Chandan Sapkota at 11:57 PM No comments:

Email ThisBlogThis!Share to TwitterShare to FacebookShare to Pinterest
Labels: Books and Papers, Poverty

Here are some interesting stuff from Michael Spence's and El-Erian's paper titled "Growth Strategies and Dynamics: Insights from Country Experiences." I read the paper way back in April when it was first released during a panel discussion in DC. I went over the paper once again yesterday, reviewed it for my reference, and found these useful paragraphs.

...There is a certain amount of confusion in the literature with respect to informational gaps in the context of development. There are informational gaps and asymmetries (and related phenomena such as signaling, screening, and reputation building) throughout advanced economies in financial, labor, and other markets. These informational gaps are structural and do not disappear over time, absent regulation that alters the incentive structure with respect to disclosure. They also exist in developing economies, but they are fundamentally different from transitory informational gaps that tend to characterize new entrants to the global economy. The latter are not structural in the same sense, and they do decline over time with experience and normal informational spillovers. Domestic investors learn over time about the global economy and foreign investors learn about the domestic investment environment and institutions. The exception of course is when there is a blockage and relatively little interaction with the global economy. Under these conditions, incentives to jumpstart the process are appropriate.

Lessons from China's experience with growth:

China’s experience (and with variations India’s) sheds light on how to approach specific challenges that are inherent to a successful growth process. These include the pace and sequencing for liberalizing internal and external markets for goods and services, how and when and in what order to liberalize the capital account, management of the exchange rate, the role of industrial policy, overcoming the constraints imposed by a banking system riddled with NPLs and noncommercial operations, dealing with surges in capital inflows, and management of national financial wealth.

And, the ingredients in recipes that generate growth:

More on this topic here.

Posted by Chandan Sapkota at 1:44 AM No comments: