(My latest op-ed is about Nepal’s fiscal budget 2010-2011 and its impact on inflation. Here is an article about sticky inflation I wrote last year. Here and here are my take on the fiscal budget.)

Will the budget increase inflation?

Immediately after fiscal budget 2010-11 was announced, the public was bombarded with analysis by ‘experts’ on a range of issues. Likewise, various institutions released statements expressing grudges not only with sectoral budgetary allocations, but also the underlying motives of doing so. Citing the expansionary budget, several experts trumpeted the unfounded risks of further rise in general prices of goods and services, i e inflation, which apparently is one of the least understood macroeconomic variables in the Nepali economy.

Given the unique way prices are sticky at high level, I think this budget will have minimal impact on inflation. The argument that the existing budget, despite all the goodies and shortcomings (see Big budget, big incentives, Republica, November 23, 2010), will push inflation up does not hold much ground. Mind you, I am not saying inflation will not increase. It might go up due to other factors, but not the size of the budget itself.

The vague admonition of surge in prices will increase inflation expectations, which in fact might artificially push prices up rather than the impact of the inflated budget. Also, comment like “inflation has become a corollary to recession” is perfunctory and speculative, and just because trade deficit is widening does not mean our economy is heading toward a depression. Preposterous and unfounded comments from economists and commentators do not do any good to our struggling economy. We have more urgent issues such as export and industrial promotion, employment, and economic growth to talk about rather than spreading the fear of inflation and depression.

In the long term, inflation is primarily affected by money supply. In the short term, it is affected by demand and supply pressures, which in turn are dictated by relative elasticity of wages, prices and interest rates. The inflationary pressure in the short term could drag into medium term and long term, leading to high inflation for an extended period of time. It happens if prices and wages are too sticky at high level, i.e. once prices and wages rise either due to demand or supply pressure, or both, even if pressures subside, they continue to remain at high levels. This is happening in the economy since 2007.

It means that monetary measures to tame inflation, mainly increase in interest rates and decrease in money supply, are largely ineffective. In fact, the growth of M2, a broad measure of money supply and a key indicator used to forecast inflation, has been inconsistent with the rise in general prices of goods and services for a long time. For instance, in the last five decades, the highest inflation of 19.8 percent was recorded in 1974 with a 17.1 percent growth of M2. The lowest inflation of negative 3.1 percent was recorded in 1976 with a 28.5 percent growth of M2. It indicates that inflation rate is not entirely consistent with the growth of M2. This is expected because our financial sector and transmission of monetary policy into the real economy have not yet developed as economic theory warrants for this mechanism to work. Additionally, with pegged exchange rate and free flow of goods and services with India, we basically have outsourced monetary policy to Reserve Bank of India, thus reducing traction of domestic policies to control inflation. This is underscored by the fact that there is an extremely weak correlation between growth of M2 and inflation in Nepal. Even if the central bank wants, it cannot fully tame the existing inflationary pressure. 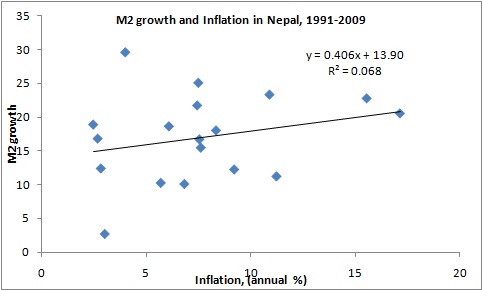 Given large scale latent unemployment and unutilized resources, the additional increase in development budget will comfortably be absorbed by local and regional economies, if the funds are timely disbursed and properly spent. There still is a huge output gap, which is the difference between potential and actual GDP, reflecting the unexploited absorption capacity of our economy. Hence, the possibility of a demand-pull inflation attributable to the jumbo budget is pretty low.

Also, since the budget has not hiked wages of public servants like the Maoist party did when they were in government—which contributed to push inflation higher— it is unlikely to add further wage-induced inflationary pressure. Note that the increase in tax rates and potentially tax revenue will partially absorb the increase in expenditure. Again, the existing budget itself is unlikely to push general prices higher.

Does this mean inflation will not increase from approximately 10 percent right now? No. Inflation might increase even higher if the same forces, both domestic and foreign, come into play like they did during the third quarter of FY 2007/08, when the economy started feeling relatively stronger external and internal shocks on general prices.

First, the global economy was struck by a rapid rise in commodity and food prices in 2007, severely affecting net food importing developing countries like Nepal. Several countries, including India, banned export of key agricultural items imported by Nepal. The shortage of agricultural goods led to rapid rise in domestic prices. Then came a sudden rise in global fuel prices in 2008, leading to a drastic increase in petroleum prices in the domestic market. This directly reduced real disposable income because a substantial portion of the population banks on petroleum products for daily need. It also shot up cost of production of domestic producers, resulting in rising prices of consumer goods and services. The combined effect of the rise in food, commodity, and fuel prices led to spiraling prices starting 2007.

Unfortunately, when fuel, commodity and food prices cooled down in the international market, the hangover persisted in our economy. Prices stubbornly remained sticky at high levels. Exogenous factors such as supply bottlenecks due to extended periods of bandas and strikes led to shortage of essential items. Additionally, hoarding, black marketeering, deliberate withholding of supplies and inventory, and agricultural trade hurdles imposed by our neighbors contributed to keeping prices higher even after the normalization of market forces.

That said, making high pitch publicly about the inflationary risks posed by this budget is poor analysis and judgment, which will do nothing but fuel inflationary expectations. The probability of further inflationary pressures is higher from supply side constraints than from the recently announced budget. Let’s be serious, honest, and not criticize policies for the sake of doing it!

Posted by Chandan Sapkota at 6:39 PM No comments: