What is really causing global food price to rise so rapidly?

There has been tremendous buzz about the real culprits of global food price inflation--some blame increasing demand from China and India, some blame biofuels, some blame droughts, some on speculation, and some on even excess liquidity in several non G-7 countries. However, which one of these has the greatest bearing on the rising food prices? Stefan Tangermann, Director for Trade and Agriculture at the OECD, argues that biofuels accounts the most part of the rise in prices because it has driven 60% of the growth in global consumption of cereals and vegetable oils.

In a situation of depleted stocks and very low demand and supply elasticities, this gap between use and output growth has pushed prices up very strongly. As a large part of the use expansion was due to biofuels, there cannot be any doubt that biofuels were a significant element in the rise of food prices. More specifically, in North America and Europe biofuels cannot be produced, and would be very little used, in the absence of government support through subsidies, tax breaks, tariffs, and use mandates. In other words, biofuel support policies have contributed greatly to the rise in global food prices.

Trade pigs for daughters, but keep both!

This is one ingenious way to stop human trafficking, especially girls for sex and house labor. It is like putting a market value for girls and then compensating that with commodities, but the seller is allowed to keep both--commodities and girls-- with a commitment to send the girls to school!

[...]Murray asked the Tharu village fathers to keep their daughters home and send them to school instead of selling them at the annual Maghe Sakranti Festival every January. In exchange, families could raise the pigs and sell them for the same amount they could fetch for their daughters. Murray's nonprofit organization, the Nepalese Youth Opportunity Foundation, also would pay for the girls' school expenses. Plus, it would kick in a kerosene lamp and 2 liters of kerosene a month - coveted items in an area without electricity.

It was an experiment based on Murray's understanding of Nepali culture after living there off and on for five years and sponsoring the education of orphans and street children. She knew pork is a prized meat and that for some families, selling a daughter was the only way to afford food for the rest of the family.

[...]Murray and Paneru have since steered 3,000 girls away from slavery and all but eradicated the long-held tradition of indentured servitude in the Tharu village.

Posted by Chandan Sapkota at 11:24 AM No comments:

Paul De Grauwe writes in the FT that what we learn and champion about free markets is in fact relevant to an ideal world only, not to this world with information imperfection. This also means that a new equilibrium should be sought between markets and state action, without tempering individual incentives.

[..]The credit crisis has destroyed the idea that unregulated financial markets always efficiently channel savings to the most promising investment projects. Millions of US citizens took on unsustainable debts, pushed around by bankers and other “debt merchants” who made a quick buck by disregarding risks. While this happened, the US monetary authorities marvelled at the creativity of financial capitalism. When the bust came, a large number of Americans who had been promised a new life in their beautiful homes were told to move out. This boom and bust cycle cannot have been an example of efficient channelling of savings into the most promising investment projects.

The fact that unregulated financial markets fail to deliver the wonders of efficiency does not mean that governments should take over. That would be worse. What it does mean is that a new equilibrium must be found in which tighter regulation is reintroduced, aimed at reducing the propensities of too many in the markets to take on excessive risks. The need to re-regulate financial markets is enhanced by the fact that central banks, backed by governments, provide an insurance against liquidity risks. Such insurance inevitably leads to moral hazard and excessive risk-taking. The insurer cannot avoid monitoring and regulating the be­haviour of those who obtain this insurance.

[...]If we have learnt one thing from the credit crisis it is that individuals did not understand the “truth” and, it must be admitted, neither did economists. Individuals who sold the new financial instruments did not understand the risk embedded in these instruments, nor did the buyers. When the bubble started many interpreted the happy turn of affairs as permanent and took on massive levels of debt that turned out to be unsustainable. When the bubble burst, they did not understand what had happened and nor did most experts. Our world is one of a fundamental lack of understanding of the “truth”.

Posted by Chandan Sapkota at 11:03 AM No comments:

Email ThisBlogThis!Share to TwitterShare to FacebookShare to Pinterest
Labels: General, US

Here is an excellent analysis in terms of game theory of the blockbuster Batman movie. It is a kinda spoiler if you have not watched it already, but the analysis is simply amazing. Some of the figures below:

Posted by Chandan Sapkota at 10:33 AM No comments: 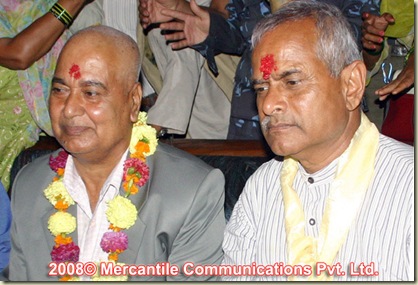 Continuing the change in political sphere after the end of centuries old monarchy system in Nepal, the people elected the country's first president and vice-president yesterday. Its a historic day. Both the gentlemen who will be in charge of the country through this crucial phase come from the usually sidelined ethnic groups from the Terai-- call it Madheshi. True representation is seen there! More here, here, and here.

Meanwhile, the Maoists, who have been really cocky in recent days, have said that they would not join the upcoming government despite winning a clear majority in the CA election. Reason: their presidential candidate lost the election. This is absurd! If you want to participate in democracy, then it is vital that you accept both failures and success. The Maoists cannot have success all the time and if the don't, it does not make sense to not join the government. This is one glaring example of opportunist and selfish party trying to derail the hard gained political gains. Moreover, what I don't understand is why was it okay when the other two big parties allied with the Maoists and why it is not okay now then the two parties switch their alliance to a Madhesi party? Maoists need to look into themselves-- their haughty, rebellious attitude. Things are dealt differently when you are out of jungle? Don't act like barbarians!

Here is the VP (sorry, in Nepali):

Posted by Chandan Sapkota at 12:58 AM No comments: