Finally, I have a stable internet connection at my place, at least for now (for how long? don’t ask!) I will now be updating this blog more frequently than during the past two weeks.

This blog post is an extension to my previous piece about the future of Nepal’s exports. I remain optimistic that exports will rebound if non-economic constraints are addressed. It is based on this paper by Jesus Felipe et al. The position of Nepal in ranking of each of the indicators discussed below is shown with a red pointed arrow in the figures.

Among the 96 non-high income countries, Nepal ranks 33 while China and India rank second and third, respectively. For a country with this level of income per capita, Nepal’s standing is not bad at all. The exports sector is still capable of rebounding. There is no need to excessively fret about curbing imports just because exports are declining. With right policies in place, we can produce new products with high exports potentials and export with comparative advantage, thus inducing further structural transformation. With the existing state of capabilities, Nepal is expected to grow at an average annual rate of the average annual growth rate of 5.49-6.69 percent over the period 2010-2030. 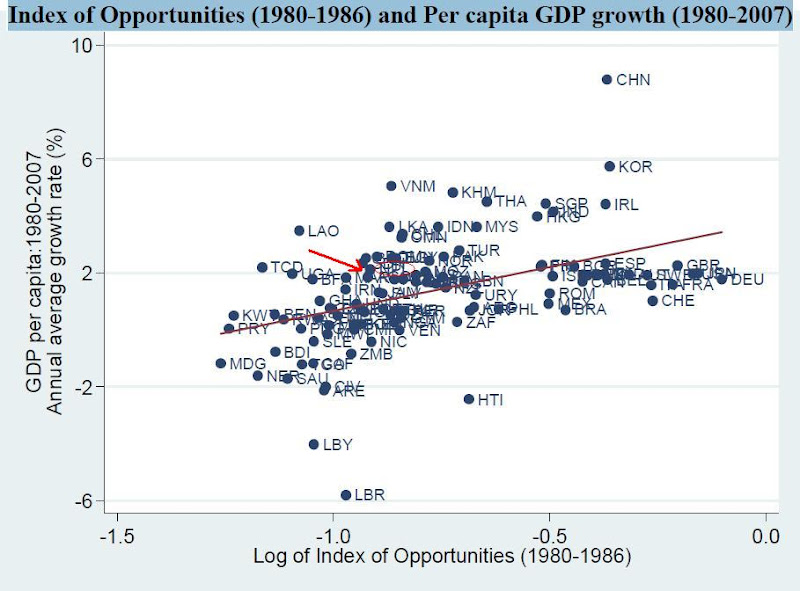 In the “Index of opportunities”, Nepal ranks third in South Asia with a score of 0.4729, following India and Malaysia with scores of 0.8590 and 0.6822 respectively. The higher the score, the better the potential to undergo structural transformation. Everything else remaining the same, a ten percent increase in the value of the index yields 0.31 percentage points of additional growth. Among the 96 non-high income countries, Nepal’s rank is 33 while China’s and India’s second and third respectively. 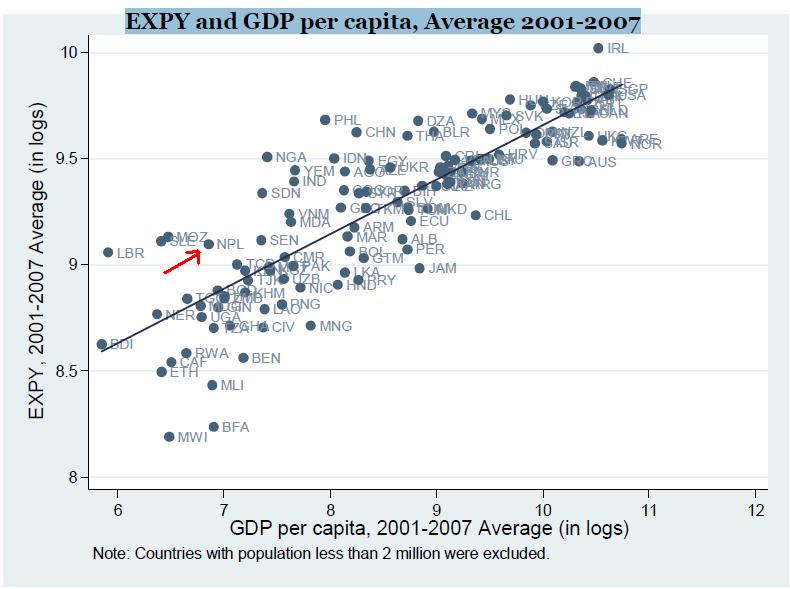 Among the 96 non-high income countries, Nepal has a score of 0.4112 in the sophistication level of the export basket, called EXPY. It is calculated as the weighted average of the sophistication of the products exported by a country. Generally, countries with high EXPY tend to have high per capita income. A 10 percent increase in EXPY at the beginning of the period raises growth by about half a percentage point, according to ADB economist Jesus Felipe. 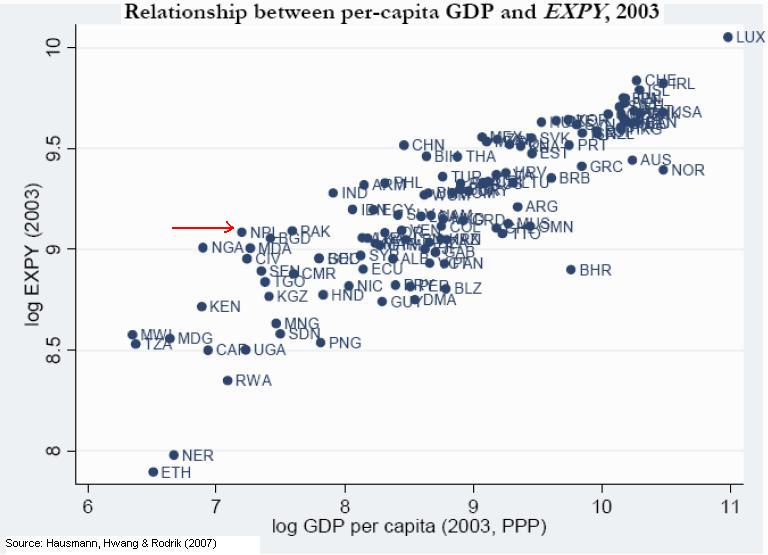 For its given level of income Nepal already has a pretty impressive level of sophistication of exports basket, although it has to be improved to if we want to enjoy the same level of export sophistication and future India and China have. With the existing state of capabilities and export potential, the average annual growth rate is projected to be between 5.49 and 6.69 percent between 2010 and 2030. 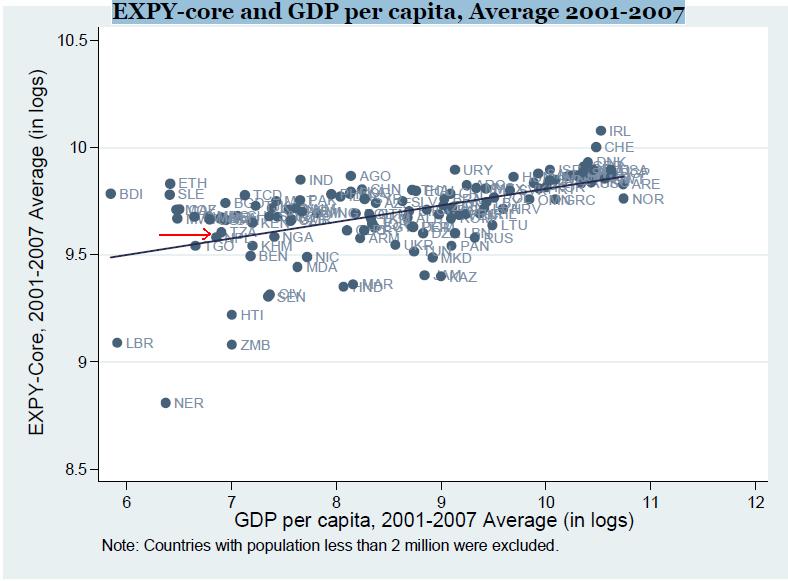 Furthermore, in EXPY-core, another measure of exports sophistication which looks at the core of the product space (machinery, chemical and metals). Nepal has a score of 0.5926 in EXPY-core. Note that even though the exports basket of Pakistan, Sri Lanka and Bangladesh are less sophisticated than ours, they nevertheless have high EXPY-core score, meaning that their exports sector has high-valued products that constitutes a major portion of the overall exports basket. No wonder they have higher exports market and high income per capita. Given Nepal’s income level, the EXPY-core score is not that bad but it can be improved further. 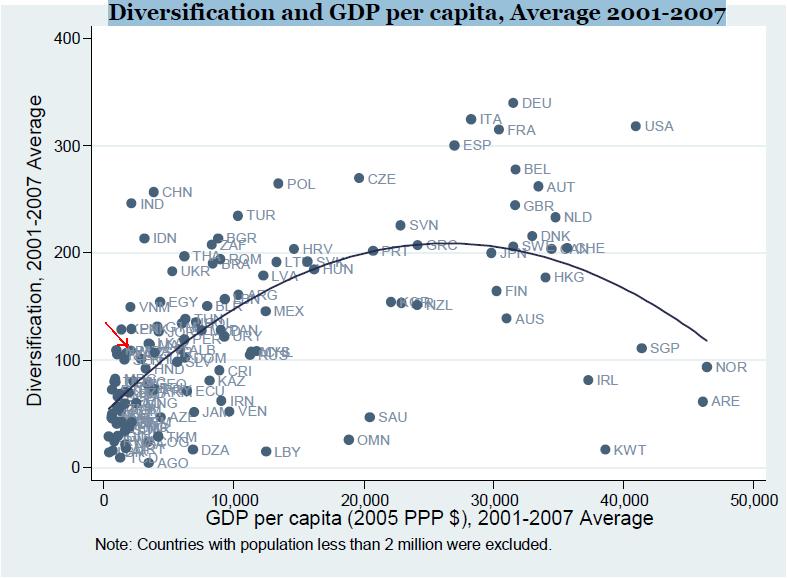 In terms of diversification of exports, Nepal has the second highest score (0.4032) in South Asia, following India (0.8611). Diversification is measured by the absolute number of products that a country exports with comparative advantage. Between 2001 and 2007, Nepal exported, on average, around 100 products with comparative advantage. Meanwhile, China and India exported 257 and 246 products, respectively. 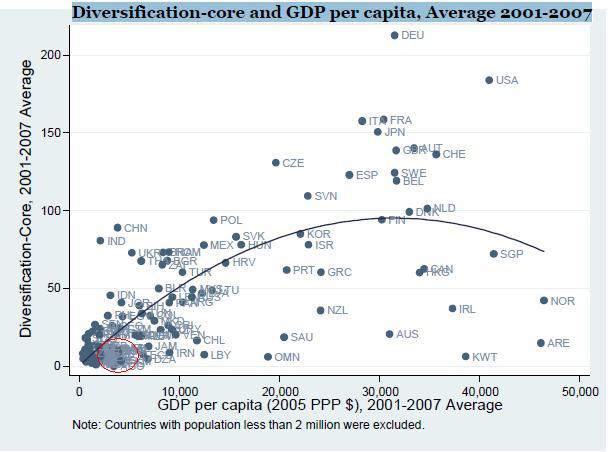 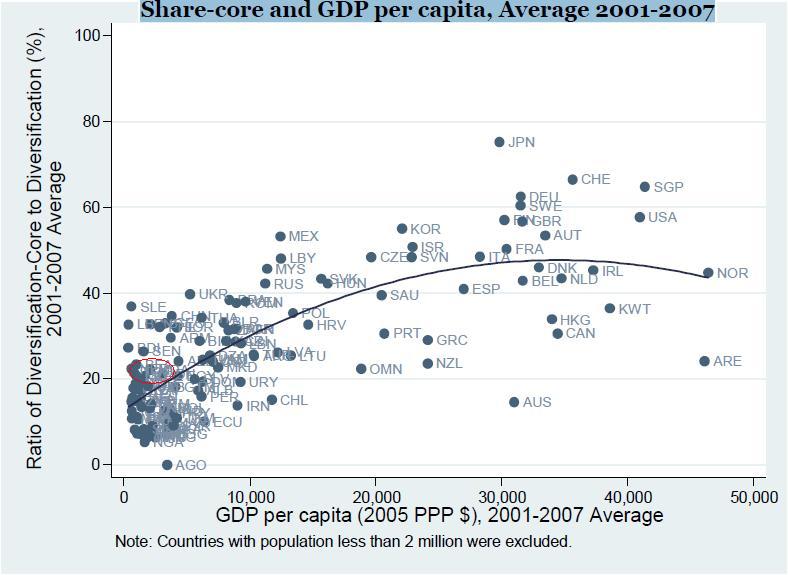 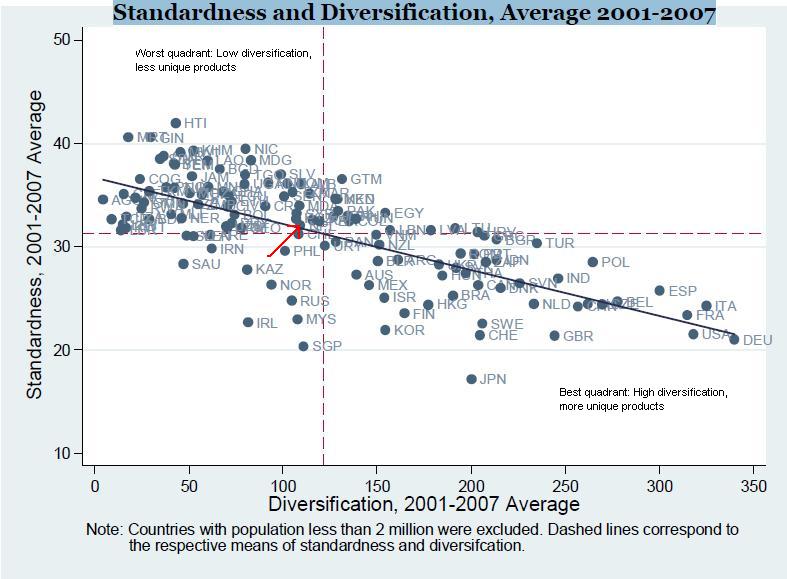 The uniqueness of products exported by a country also matters in ensuring sustainability of exports sector and in undergoing the resulting structural transformation. In terms of uniqueness of exports, termed standardness, Nepal has a score of 0.5219, while China and India have 0.7917 and 0.9352, respectively. The standardness level of Nepal is better than that of countries with the same income level. Nepal has a good degree of exports uniqueness and diversification. This is an encouraging news for the listless, demoralized exports sector. 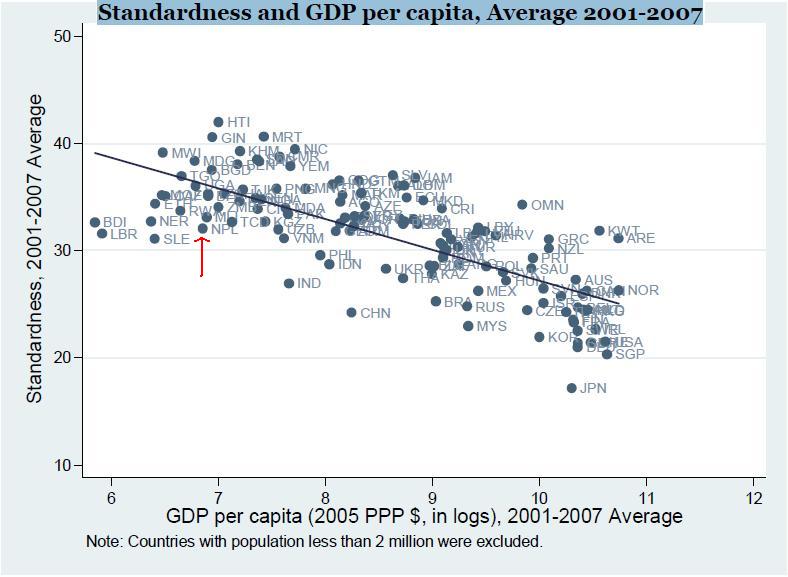 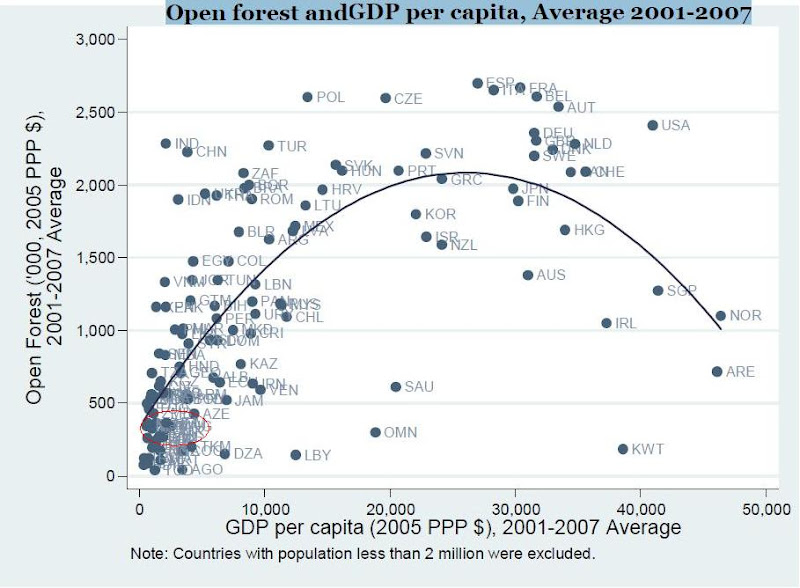 Nepal has a score of 0.2041 in “open forest” dimension of the Index of Opportunities. It is among the lowest among the South Asian countries. The low score indicates the fact that the industrial sector needs revamping of its capabilities to produce goods that are sophisticated and are within close range of each others capital and resources requirements. Poland, India, Turkey, China, and South Africa have one of the highest open forests among developing countries.

My point: The exports sector is not done yet and there is no need to resort to widespread import curbing measures, especially in daily consumption goods. We can increase exports if we could judiciously and decisively address non-economic constraints ailing the industrial sector and implement highly targeted and appropriate industrial and trade policies. The product level analysis of sophistication of our exports basket reaffirms this conviction.

Posted by Chandan Sapkota at 12:49 PM No comments: