Bedeviled by rising losses and slacking competitiveness on export sector and hence its direct negative impact on the growth rate, the government had been mulling over establishing SEZs for the past several years. This is supposed to enclave the export-oriented industries from labor disputes, complex tax issues, and other exogenous problems related to supply of energy and labor.

Finally, the government has ratified establishment and implementation of SEZs act in the country. Under the WTO, low income country like Nepal are allowed to take initiatives to prop up their flagging export sector, which basically supports the manufacturing sector and high wage jobs apart from the agricultural sector. I argued for more incentives for export-based industries in past opinion pieces here and here.

Nepal has been doing very bad in the export sector recently (see the figure below), thus affecting the growth rate. The end of MAF in early 2005 has proved to be detrimental to the Nepali textile and garment industry, the main component of export portfolio. Read this opinion piece for more stuff. 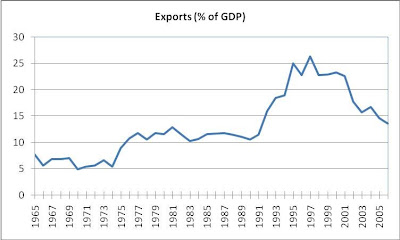 Fig1: Exports as a % of GDP. Notice steep decline in exports after 1997, a shock probably emanating from the declining competitiveness of garment and textile industries and a series of phase out of quotas under the MFA.

The Act allows workers to unite and practice collective bargaining, but prohibits them from undertaking activities that affect production and normal operations of industries…

Terms of recruitment, facilities and lay off will be governed by the agreement the worker and management will sign while accepting the job. Initially, the draft had incorporated the ´hire and fire´ provision as demanded by entrepreneurs…SEZ Authority and the SEZ regulations will determine the extent of workers pay scale, medical and insurance facilities, among others…

In order to lure investors in SEZ, the Act has provided them with facilities such as duty-free import of raw materials, exemption of value added tax (VAT) and free them from excise duty and other local taxes. The industries in SEZ have been provided with income tax holiday for five years…After five years also, they will continue to enjoy 50 percent discount on income tax…In order to ensure investors, the Act says industries already into operation would continue to enjoy all the facilities, even if later amendments changed the structure and extent of facilities.

Going by the Act, only export-oriented industries can be set up in SEZ. Nevertheless, the government has allowed them to make domestic sales not exceeding 15 percent of their transactions. Interested investors now can acquire land in the zone in lease for 30 years from the SEZ Authority, which will be led by an independent expert. Also, they will receive 50 percent, 40 percent and 25 percent discounts respectively on the lease rent for the first three years of investment. After 30 years, lease agreement can be renewed in every 5 years.

Way to go before the crippling export-based sector revives its previous position as the driving force of growth!

Posted by Chandan Sapkota at 11:03 PM No comments: