In the preceding blog post, I focused on aspects such as area, population, share in national production, share in agricultural and manufacturing output, poverty and fiscal condition of the 15 severely affected districts. Here, I will focus on migration and remittances, housing, road network, tourism and hydropower.

: Of the 15 severely affected districts, except for Kathmandu, Lalitpur and Bhaktapur, all other districts have a negative net migration (lifetime migrants). It is computed as the difference between in-migrants and out-migrants (share of population) in each district. The 15 districts together account for about 26.5% of total lifetime out-migrants. 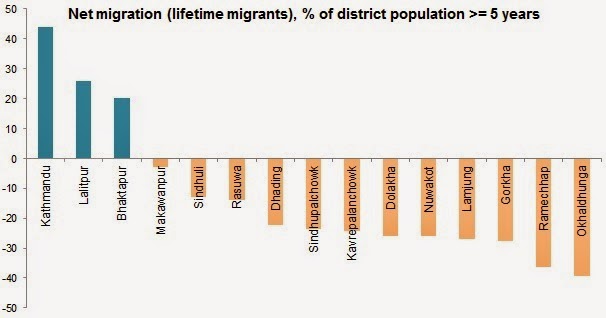 FYI, population aged 5 years and above is considered “in-migrant” if the present district of enumeration is different from the district of residence before five years. The negative lifetime migration indicate a higher out-migration from these districts, which are also backward in terms of both economic activities, infrastructure and employment opportunities. Obviously, Kathmandu, Lalitpur and Bhaktapur have positive net migration because of the relatively better economic and job opportunities. 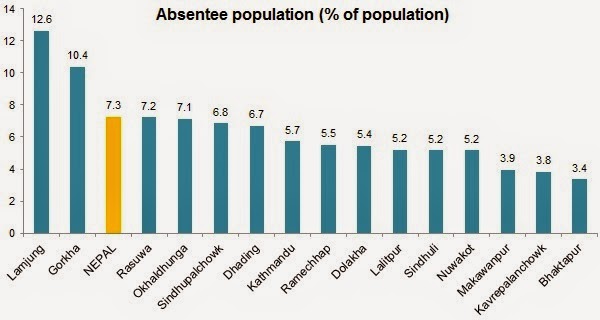 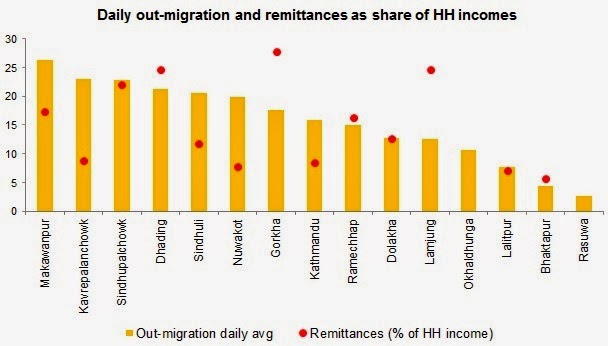 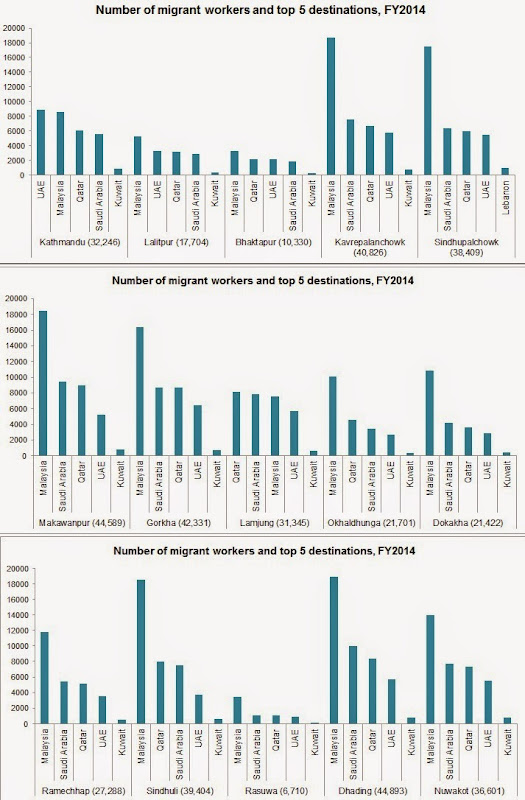 Remittances: Remittance inflow to households support their demand for consumption, education, healthcare and asset accumulation. Survey estimates show that remittances account for about a quarter of household income in Gorkha (27.8%), Dhading (24.7%) and Lamjung (24.7%). Similarly, remittances account for 22% of household income in Sindhupalchowk. The rest comes from agriculture and small scale business activities. Remittances act as an important source of cushion during an income shock (such as the one triggered by the earthquake). Migrant workers tend to remit more money back home immediately after such an income shock. However, in the absence of immediate relief and rehabilitation measures, migrants workers may prefer to come back to their villages. In this case, remittance inflows may decelerate in the medium term. This could impact not only household finances, but also the national fiscal and external balances. 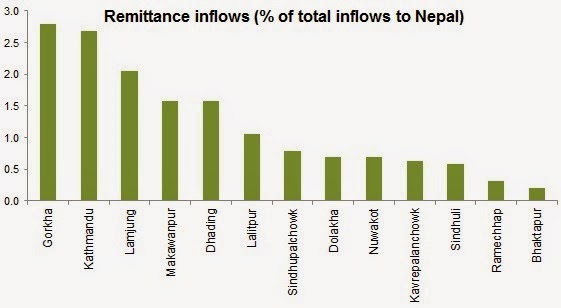 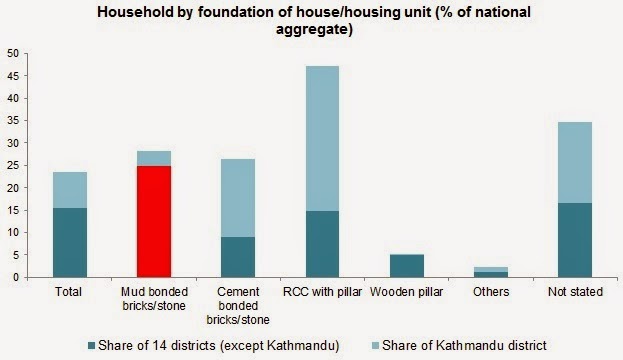 Consequently, the weak structures were annihilated by the strong earthquake and the ensuring aftershocks. In fact, only 9.9% and 24.9% of total households in Nepal have houses made of RCC with pillar and wooden pillar, respectively. These are mostly in the urban areas. The government has to encourage, and appropriately incentivize, households to construct earthquake resistant houses so that when a strong one strikes next time, most of the houses remain intact. This will also help households to withstand income shock and prevent them from falling below the absolute poverty line. The 15 severely affected districts together had about 0.68 million households with houses/housing units made of mud bonded bricks/stone. Another 0.25 million were made of cement bonded bricks/stone (more than half of them in Kathmandu district). 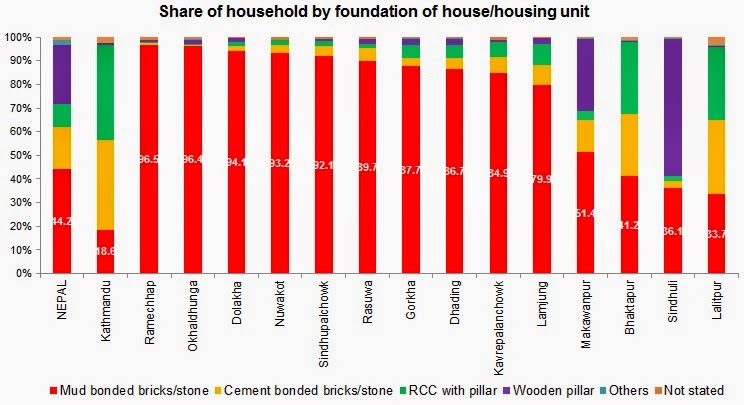 : According to Census 2011, the literacy rate (6 and more years) in Okhaldhunga, Dolakha, Dhading, Ramechhap, Sindhuli, Nuwakot, Sindhupalchowk and Rasuwa was lower than the national average of 66.6%. Gorkha, Makawanpur, Kavrepalanchowk and Lamjung had literacy rate below 75%. 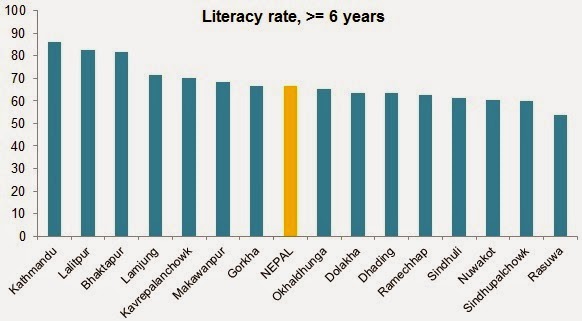 The 15 severely affected districts accounted for about 23.7% and 21.2% of total schools and community schools, respectively (8,250 schools and 6,213 community schools). Kathmandu district has 1,370 schools, Kavrepalanchowk 969, Dhading 653 and Sindhuli 581. Among the 15 districts, Dhading has the higher number of community schools (608), followed by Kavrepalanchowk (588) and Sindhuli (559). The most severely hit districts have more community schools than regular schools. Note that regular and community school buildings usually serve two purposes: (i) classrooms for teaching, and (ii) a shelter point during emergency or disaster. Nepalese schools so far have focused on the first only (that too poorly built structure). This is an opportunity to ensure that school buildings fulfill both purposes, and for this they need to be rebuilt in such a way that they are earthquake resistant. It has been reported that almost 90% of schools are either destroyed or are uninhabitable in the rural areas/backward districts. 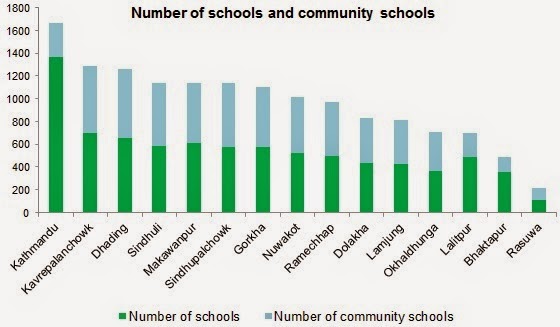 : The 15 districts together accounted for 19.8% of total strategic road network (SRN). The population influenced by per kilometer of road is the highest in Kathmandu, Lalitpur, Bhaktapur, Kavrepalanchowk and Lamjung— all have per km road influence higher than the national average of 2,131 ‘influenced people’ per km. The map below shows that most of the areas in the upper hilly and mountain regions are yet to be connected by functioning road network. 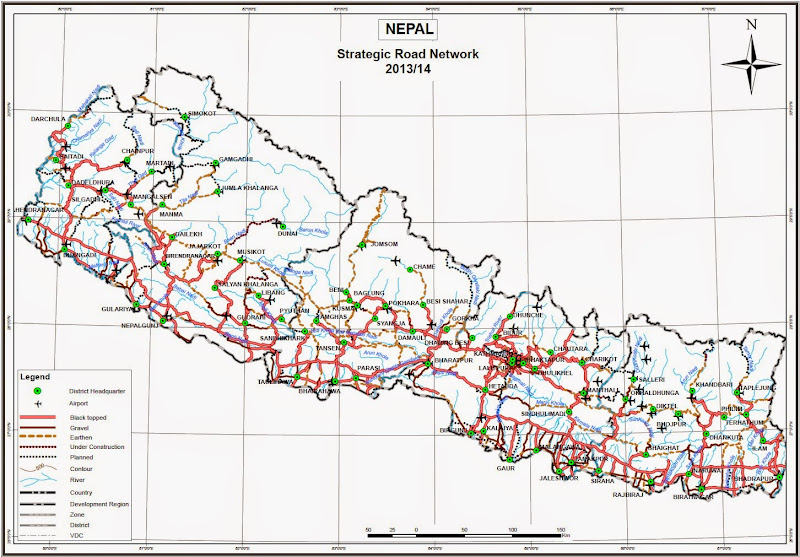 A more relevant picture regarding the difficulties in delivering relief to the most affected as well as mostly rural districts is given by road density (km per 100 sq km of land area). As expected the most affected districts have a miserable road density statistics. For instance, Rasuwa, Lamjung, Gorkha, Dolakha, Ramechhap and Okhaldhunga have road density lower than the national average of 8 km per 100 sq km of land area. Bhaktapur, Kathmandu and Lalitpur have the highest figures. One of the lessons during the relief operations is that VDCs having access roads (irrespective of the quality!) have gotten relief materials (whatever is the quantity!) relatively faster than places without an access road. Furthermore, houses built after the access road were constructed tend to have some RCC and cemented pillars, provided that households have money (remittance played a role partly) to construct. It meant that these houses for a large part withstood the devastating jolts. Hence, the importance of rural access road, even if they are expensive to construct because of scattered communities/habitat. Rural access roads also help to boost agricultural as well as local business activities. 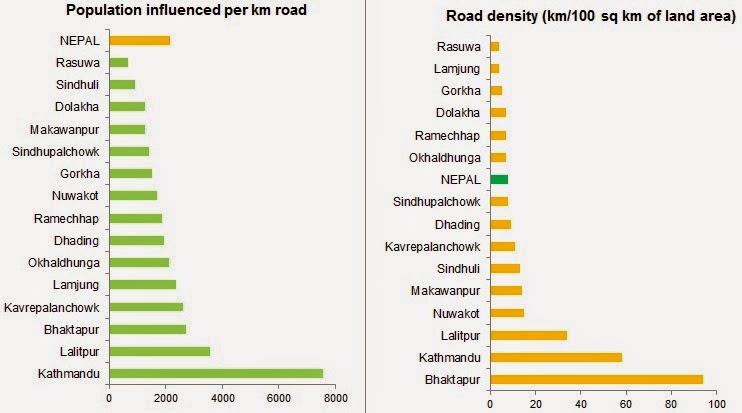 : Tourism is an important part of the economy and employment generation. Even though revenue from tourism accounts for just 2% of GDP, its contribution to employment and SME promotion is large (since it has robust backward and forward linkages). The post-earthquake situation not only impacting tourism in the affected districts, but also total flows to the country and hence the associated economic activities and employment generation (about 1.4 million people were engaged by this sector). Travel and tourism activities include stay in hotels, homes stay, trekking, travel, rafting, airline business, paragliding, ultra light flights, mountain flights, money exchange, small scale tourism related establishments, etc – a whole slew of backward and forward linking activities. 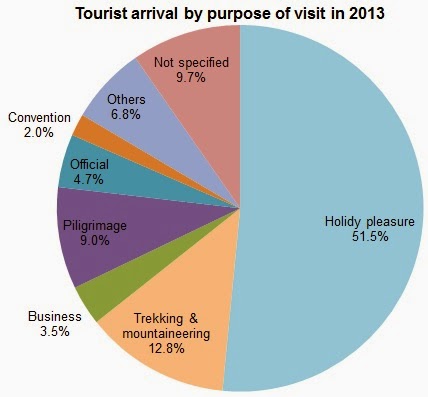 About 0.8 million visitors visited Nepal in 2013. Of these, 51.5% came for holiday/pleasure, and 12.8% for trekking and mountaineering. Mountaineering has been badly hit as climbing is closed for two consecutive years.

A major effort is required to rebuild the trust of visitors.There is also an urgent need to upgrade tourism infrastructure, offer competitive services, conduct effective branding, increase average expenditure per visitor per day (stands at just $43 right now), and increase the number of days a visitor spends in the country.

The earthquake affected districts as well as the adjoining ones have one of the most popular trekking routes, national parks, conservation areas, and recreation hubs. It stimulates local economies on a seasonal basis and sustains thousands of jobs. Furthermore, some of the affected districts are popular for home stays. Kathmandu, Nuwakot, Lalitpur, Ramechhap, Makawanpur and Kavrepalanchowk together accounted for 75.6% of total registered number of affiliated home stay houses in 2013. Similarly, they together accounted for 94.6% of the total rooms available in registered homestay, and 94.8% of total beds. 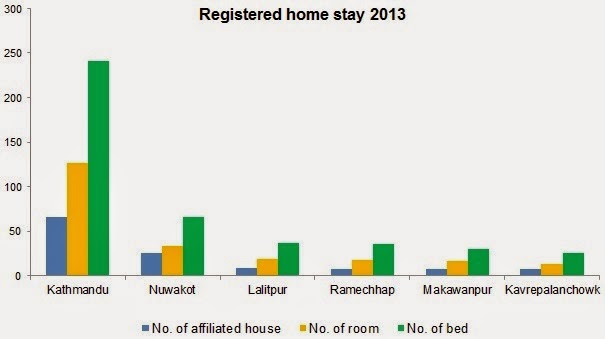 Hydropower: According to media reports, about 160 MW of hydroelectricity is not produced right now due to the impact of the earthquake. NEA is importing 210 MW of electricity from India. Although the electricity demand is over 1000 MW, NEA is supplying 564 MW right now. A total of 18 hydropower plants have shut down generation. Some hydropower projects in Sindhupalchowk, Nuwakot, Rasuwa, Dolakha, Lamjung and Dhading are affected by the earthquake.

Generally, hydropower projects are ‘extra engineered’ taking into account the probability of this kind of natural disaster. The electricity demand and supply situation won’t impact much in the medium term as news reports state that most of these are repairable damages that could be done within a few weeks. Furthermore, there has been an increasing amount of electricity import from India. Short-term revenue flows and employment will, however, likely get affected. 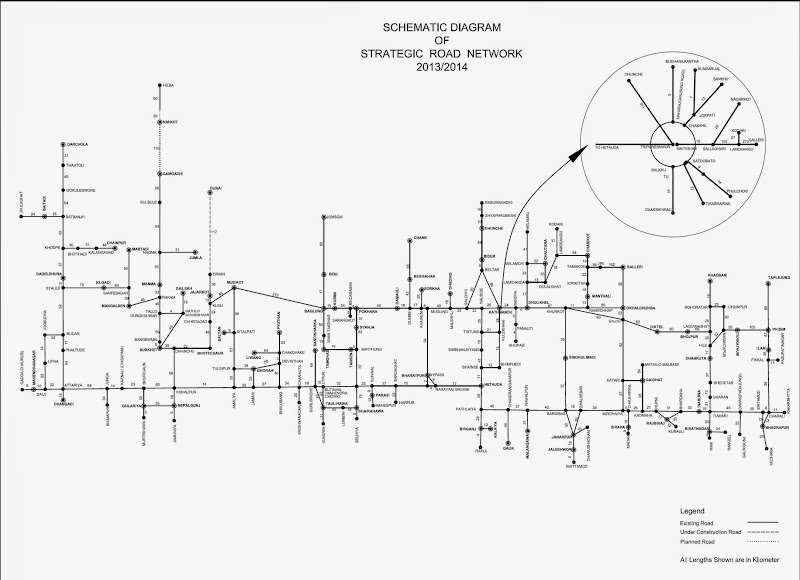 Posted by Chandan Sapkota at 8:41 AM No comments: