Pariah for couple of days:Taboo that needs abolition 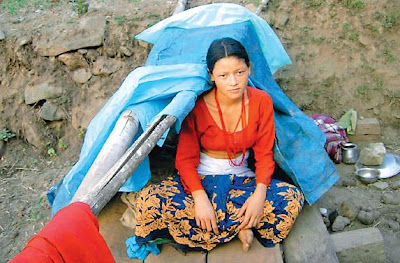 A Maoist worker in menstruation, from Bhairavsthan VDC in remote Achham district, living in isolation in a makeshift tent near her house, Friday. This practice known as Chhaupadi is widely condemned by women’s rights groups as inhuman. In this part of Nepal, women are considered impure for 11 days after childbirth and four to seven days during menstruation and kept in isolation. (Source: The Kathmandu Post, June 21)
Posted by Chandan Sapkota at 12:28 PM No comments:

Always critical of aid agencies, Easterly has now come up with his own raking of aid agencies. Starting his assumptions from a distrust on aid agencies, of whatever nature they are, he focuses on the difficulties faced by aid agencies because "they are typically not accountable to their intended beneficiaries." He considers dimensions of aid practices like transparency, specialization (the degree to which aid is not fragmented among too many donors, countries, and sectors), selectivity (the extent to which aid avoids corrupt autocrats), use of ineffective aid channels such as tied aid, food aid, and technical assistance, and the overhead costs of aid agencies.

Among the 48 aid agencies he looked at, the World Bank's IDA, of which he is always critical of, is in the first place. Here is the full ranking 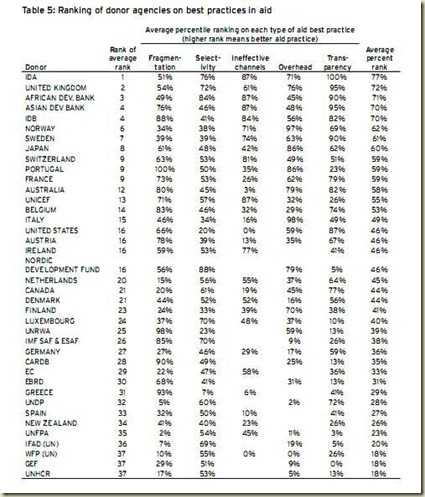 Easterly said that he was surprised by the performance of the World Bank: “The World Bank is seen as professional and staff is chosen on the basis of merit." Meanwhile, the UN agencies have performed poorly in his list. I am surprised that UN WFP is third from the last in his list. UNHCR is in the last. Easterly argues that this happened because these agencies are considered "bloated and politicized." He is also unhappy with limited information disclosure from WFP. This might have skewed the results further because it is unbelievable that WFP and UNHCR are in the bottom of the list. These agencies conduct targeted aiding in the most difficult places in the world. And, the outcome is generally positive. Food aid directly given to the most affected people, be it in an in a country run by an autocrat or in a democratic country, should not be viewed differently. Targeted food aid is for survival and WFP's work in the despot states should not be viewed negatively, thus affecting its ranking. Easterly explains that the data are incomplete, which means that the ranking is just another ranking with doubts in its findings.

The main conclusions of our paper appear somewhat contradictory: (1) the data are terrible, and (2) the pat- terns the data show are terrible. If the data are terrible, how do we know the patterns they seem to show hold true? Still, we remain convinced that some data is better than no data. Also, we hope that as researchers publish ﬁndings based on the currently available ﬂ awed data, additional data collection and quality improvement will take place. The data situation among aid agencies, such as the murky data available on operating costs of aid agencies and the non-reporting of essential items like aid tying and sectoral shares of aid spending, would be unacceptable in most areas of economics in rich country democracies. It is particularly sad in an area where the objective of these agencies is helping the poorest people in the world, and where one of the few mechanisms for accountability is for outsiders to check what they are doing.

Our ﬁndings on aid best practice tend to conﬁrm a number of long-standing complaints about foreign aid. The aid effort is remarkably splintered into many small efforts across all dimensions—number of donors giving aid, number of countries receiving aid from each donor, and number of sectors in which each do- nor operates. A lot of aid still goes to corrupt and autocratic countries, and to countries other than those with the lowest incomes. Aid tying, the use of food aid-in-kind, and the heavy use of technical assistance continue to persist in many aid agencies, despite decades of complaints about these channels being ineffective. In addition, some agencies have remarkably high overhead costs. The broad pattern that emerges from our evidence is that development banks tend to be closest to best practices for aid, the UN agencies perform worst on these dimensions, and the bilaterals are spread out all along in between. Explaining why each of these patterns persists over time raises an interesting agenda for research in political economy

Posted by Chandan Sapkota at 12:23 PM No comments: