Poverty based on MPI or income: Which one to look at in the case of Nepal?

National Planning Commission, in collaboration with Oxford Poverty and Human Development Initiative, recently published multidimensional poverty index (MPI), which will be used in measuring progress in SDGs and for policy focus in the provinces. MPI based poverty estimates are different from the traditional cost of basic needs based estimates (the one we usually hear: national poverty line or the latest $1.90 a day (2011 PPP $) poverty line that takes into account the minimum income needed to consume minimum level of calorie requirement, and non-food goods and services). Here is an old blog post based on previous MPI methodology and here is a post on the other measures of poverty. 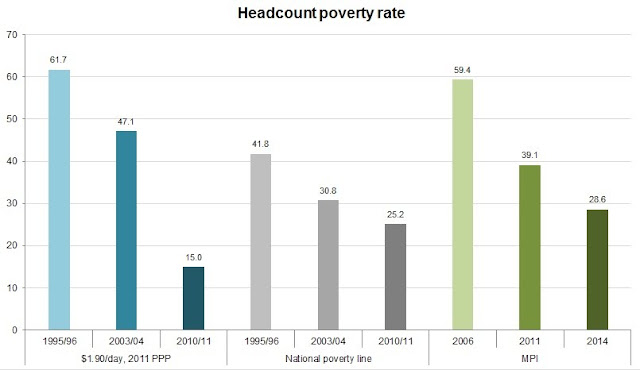 The MPI assesses a range of critical factors or “deprivations” at the household level: from education to health outcomes to assets and services.  The index ranges from zero to one, with low value meaning low MPI. It ranks countries based on MPI. The MPI value reflects both the incidence (percentage of people who are poor) and intensity (the average number of depravations each household faces) of poverty. A person who is deprived in 70% of the indicators is clearly worse off than someone who is deprived in 40% of the indicators. Note that MPI is computed as poverty rate (the headcount ratio) times intensity of people’s depravation (average depravation score among poor people) 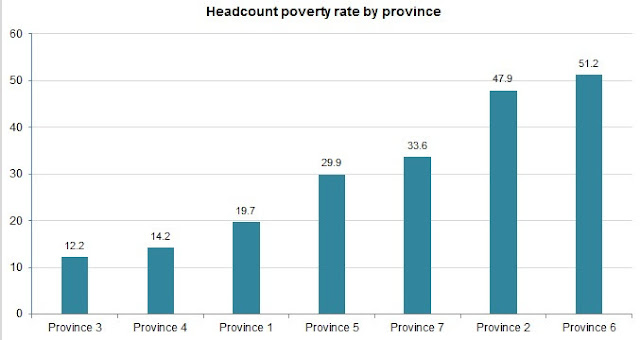 It is important not to get confused with MPI based poverty estimates and cherry-pick poverty headcount numbers to suit an argument. We need to be careful of the fact that the usual poverty estimates we have been hearing about (the ones published by CBS and WB are based on NLSS data) and uses a cost of basic needs approach in general. The WB aggregated it for a bunch of least developed countries and came up with the global poverty threshold ($1.90 a day at 2011 PPP US$). Meanwhile, the CBS considers any one earning below NRs19,261 (both food and non-food) to be poor. The latest MPI based poverty estimates uses Multiple Indicator Cluster Survey (MICS) 2014.  The earlier MPI estimates were based on DHS 2006 and DHS 2011 data. So, caution much be exercised while comparing one with the other!

The overall message is that poverty is falling rapidly no matter which estimate we look at. Policy intervention message is more clearer in the case of MPI as it disaggregates what contributes more (indicators related to education, health or living standard) to high or low poverty levels in provinces.
Posted by Chandan Sapkota at 10:36 AM 2 comments: