Here is a revealing piece on the global supply chains and how Nepalese migrant workers are related to it. 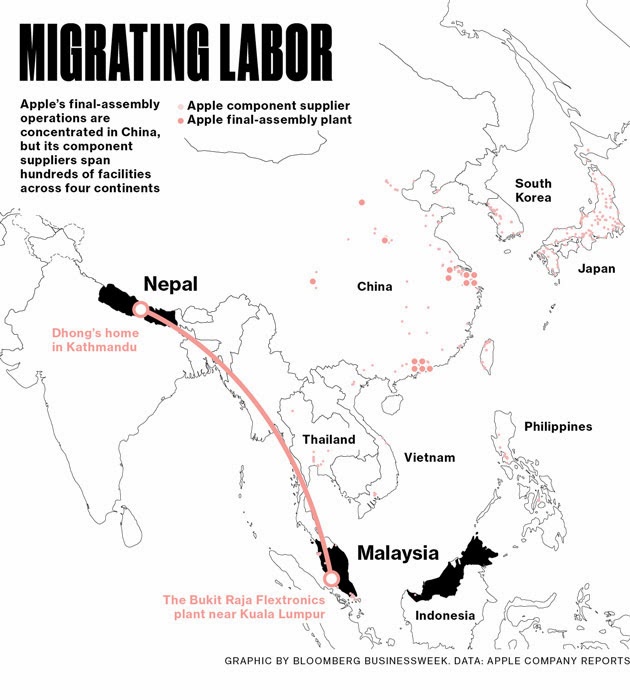 The piece also tracks the cost of migration to Malaysia. It comes out to be over $1000 plus interest.

Excerpts from the article:

At some point, he paid $250 to a recruiter who promised to line him up with a good foreign job. That recruiter then connected him to a broker in Kathmandu, one of more than 750 registered with the government. Dhong left his passport with the overseas broker—and waited. On Oct. 14, 2012, he got the call. He was told to get to Kathmandu’s Tribhuvan International Airport for a flight in three hours and to bring the equivalent of $500, or about six months of his dairy wages. There was no way Dhong could come up with that much cash, pack, and leave so quickly, so the broker told Dhong to bring as much money as he could to the office, then head to the airport at the same time the next day. Dhong and his wife borrowed about $350 from a local lender. He gave it to the broker, saying it was all they had. The broker took the cash and told Dhong to meet yet another agent, the third link in Dhong’s own personal supply chain, at the airport.

Dhong grabbed a black-and-tan backpack holding his shaving kit, a single change of clothes, two Bibles (one in Nepalese, one in English), and three family photos. He said goodbye to his crying wife and daughter, then jumped onto a microbus on a loud and dusty Kathmandu road. As promised, the third agent was at the airport, holding Dhong’s passport. He demanded money, but Dhong had nothing left to give. So the broker told Dhong to sign a debenture agreement promising to pay $400 more. If Dhong didn’t sign and if he didn’t quickly pay, he would lose the job. He had yet to start work, and already he was $1,000 in debt.

Dhong signed and got his passport and a sheaf of documents. He says all the brokers involved told him never to mention the fees, because, “If any worker reveals it to anyone, he will be sent back to Nepal immediately, and he will be charged and punished.” Later that afternoon, Dhong climbed aboard a plane for the first time in his life. There were 41 others headed for Flextronics on the same flight. When the recruits landed in Kuala Lumpur on Oct. 15, a representative from Flextronics met them at the airport. He took their passports and put them on a bus that took them south of the city, then past a security gate to two high-rise towers the company rented as a hostel for the men.

By the end of October, the drive to produce cameras was in full swing. Dhong and the other men on the day shift rose around 5 a.m. to get ready and line up for buses that drove them to the factory for a 7 a.m. start—the trip could take more than an hour in the crush of traffic. When he arrived at the plant each morning, Dhong slipped into a white clean-room suit covering his body head to foot, including a tightly cinched hood. A cotton mask hid most of his face. Except for breaks, Dhong and the others stood throughout their 12-hour shifts beneath white drop-tile ceilings and fluorescent lights. Their lines were named after American states: New Mexico and Rhode Island. About 3,000 women from Vietnam and Indonesia also worked in the plant, according to the recruiting agents in Nepal, but the Nepalese workers say they had little contact with them. Contracts for Dhong and the other Nepalese men set their base salaries for 12-hour shifts at about $178 per month. It was the minimum monthly salary mandated by the government of Nepal for its citizens living in Malaysia.

More on remittances in Nepal here and here.
Posted by Chandan Sapkota at 9:23 PM No comments: