Doing Business 2013: No improvement in ease of doing business in Nepal

In its latest Doing Business 2013: Smarter Regulations for Small and Medium-Size Enterprises report, the IFC has ranked Singapore as the top economy in terms of ease of doing business. The other top ranked economies are Hong Kong (SAR, China), New Zealand, the United States, and Denmark. Last year as well, the same economies were in the top position.

The report ranks economies based on performance in ten indicators: starting a business, dealing with construction permits, getting electricity, registering property, getting credit, protecting investors, paying taxes, trading across borders, enforcing contracts, and resolving insolvency. This year’s report data cover regulations measured from June 2011 through May 2012.

Poland was the global top improver in the past year. The other economies that have made the most progress in several areas of regulation last year were Sri Lanka, Ukraine, Uzbekistan, Burundi, Costa Rica, Mongolia, Greece, Serbia, and Kazakhstan.

In terms of ease of doing business, Nepal ranked 108 out of 185 countries. Last year, Nepal ranked 107 out of 183 countries and in DB2011 Nepal’s ranking was 110. Between DB2012 and DB2013, Nepal did not enact a single reform aimed at easing business processes and regulations. Hence, the progress made by other economies dropped ranking one position below last year’s ranking (plus there was addition of two economies in this years report).

This year, the report also provides a new measure called ‘distance from frontier’, which benchmarks economies to the frontier in regulatory practice. In other words, it measures the absolute distance to the best performance on each indicator. When compared across years, the distance to frontier measure shows how much the regulatory environment for local entrepreneurs in each economy has changed over time in absolute terms, while the ease of doing business ranking can show only relative change.

An economy’s distance to frontier is indicated on a scale from 0 to 100, where 0 represents the lowest performance and 100 the frontier. For example, a score of 60 in DB 2012 means an economy was 60 percentage points away from the frontier constructed from the best performances across all economies and across time. A higher score in DB 2013 indicates an improvement.

Compared to DB 2006, in DB 2013, in Nepal, there was improvement in all indicators except trading across borders. The largest improvement was in dealing with construction permits, followed by getting credit and starting a business. Overall, Nepal's ease of doing business improved by four percentage points (i.e. closer to the frontier by four percentage points) between DB 2006 and DB 2013. 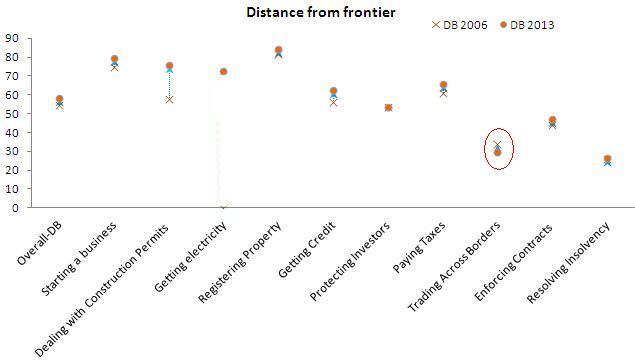