Nepal fixes minimum wage at Rs 8000 per month, the highest in South Asia

Following tripartite negotiations involving representatives from the government, trade unions and employers, minimum wage in the formal sector has been increased to Rs 8,000 per month, up from the revised Rs 6,200 in 2011. It includes Rs 5,100 as salary and Rs 2,900 as dearness allowance. Previously, the basic salary was Rs 3,550 and the dearness allowance was 2,650. 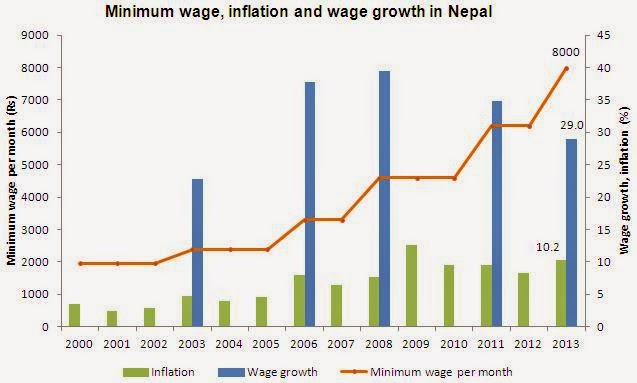 Now, the challenge is to boost productivity accordingly. Else, Nepal will continue to see the erosion of competitive edge, loosing the already shrinking markets abroad. The cost of production is already high compared to regional competitors. For instance, the cost of production of 60-knot carpet hovers around $80 per square meter in Nepal, but the production cost of the same variety hovers around $45 per square meter in India. It is mainly due to the compulsion to run diesel generators because of lack of adequate supply of electricity, high labor cost, high cost of raw materials, skills gap, strikes, lack of R&D within the private sector, etc. Realistically, some of these supply-side constrains and structural bottlenecks is hard to overcome in the short term. But, some hiccups like skills enhancement, strikes, and labor cost (which is potentially settled for the next two years) can be addressed in the short term itself.

The Minimum Wage Determination Committee has recommended the revised minimum wage to the government for its final approval. As per the Labour Act 1992, workers’ minimum salary is reviewed every two years. According to some estimate, formal sector constitute around 300,000 workers only.
Posted by Chandan Sapkota at 12:58 PM No comments: