Nobel laureate Michael Spence chaired the Growth Commission, which recently published a The Growth Report after two years of study on the causes of economic growth. The IMF's new F&D magazine has an interview with Spence and Mohamoud Mohielden (Minister of Investment, Egypt)  about the financial crisis. Spence argues that unclogging credit market should be the first priority of Western  governments and this should be followed by "well-thought-out fiscal stimulus that has a time dimension".

Catch-up growth according to Spence:

We called it catch-up growth because of the global economy's contribution to growth—which we found was an essential element after looking at the dynamics of the successful high-growth cases. It is pretty well understood from trade theory and modern growth theory that global markets are big and a country can grow pretty fast without expanding its market share much—and if it has the terms of trade. But the other part, which is emphasized by Paul Romer and other distinguished leaders in the area of growth theory, is that catch-up growth is really about learning. It's about knowledge transfer. It's expanding your potential output based on what the economy—both the private and public sector sides—comes to have expertise in doing, and that is the catch phrase, no pun intended, for catch-up growth. This is what, we believe, more than anything else enables countries to grow at rates in the 7–10 percent range, and nobody else can do that. You can't do it in isolation and you can't do it as an advanced country with no counterexamples because you have to invent all the technology that moves the production possibility out, whereas developing economies can, at least for a period of time, import it. You have to import it and adapt it so it takes a considerable amount of ingenuity, innovation, and adaptation. 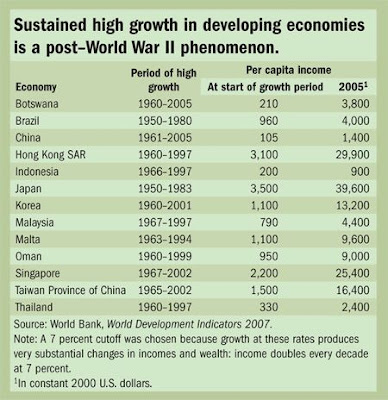 What would The Growth Report have focused on if it were published today? Obviously, financial crisis:

If we wrote the report in late 2008, we would have emphasized the volatility and insurance aspects more, because when they get out of control they produce crises. Also, we already know that such crises are debilitating for progress and growth, and do not adequately support growth policies.

Spence thinks the one key policy ingredient for high growth rate is openness to global economy. Mohielden thinks it is human capital. 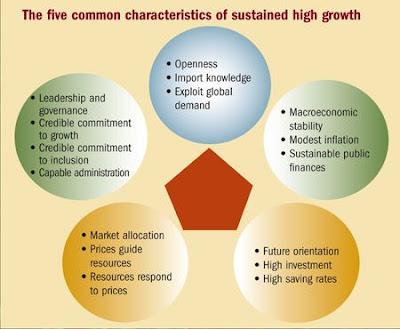 In an article relevant to the present global financial crisis, this interview with Robert Shiller is quite interesting. Here is IMF's Chief Economist Olivier Blanchard on the financial crisis and policy responses required during and after the crisis.

Here is an interesting piece from real-world economics review: After 1929 economics changed: Will economists wake up in 2009?

Posted by Chandan Sapkota at 10:35 AM No comments:

- Bad sign: Ecuador defaults on foreign debt saying it won’t pay “illegitimate” debts owned to “monsters” (Does Ecuador feel like Argentina in 2001 and Mexico in 1994 now?)

- Labor  unrest causes 70 factories to close down in Nepal 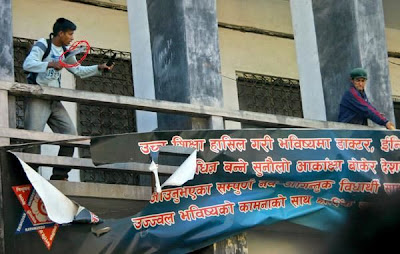 - Why taxes should be low in developing countries?

There is a good rule in setting taxes: the poorer the country, the lower the tax burden. This is for two reasons. First, poorer countries waste more tax money through corruption. Second, lower tax burdens for businesses lead to more economic activity.

Posted by Chandan Sapkota at 12:33 AM No comments: