Extractive institutions and prosperity in Nepal

Why is Nepal poor?

Why is Nepal languishing behind while other countries, which started with pretty much similar income level in the past two centuries, are witnessing high level of prosperity? Why are resource rich as well as landlocked countries making bigger strides than Nepal in the past six decades? In a new book titled “Why Nations Fail”, MIT’s Daron Acemoglu and Harvard’s James Robinson offer persuasive reasoning and insights on the failure of nations like Nepal to prosper, innovate, and achieve sustainable economic growth. Though the book does not specifically include discussion related to the failure of Nepal to usher an economic revolution, it does offer a compelling theory for the failure of low-income country like ours. 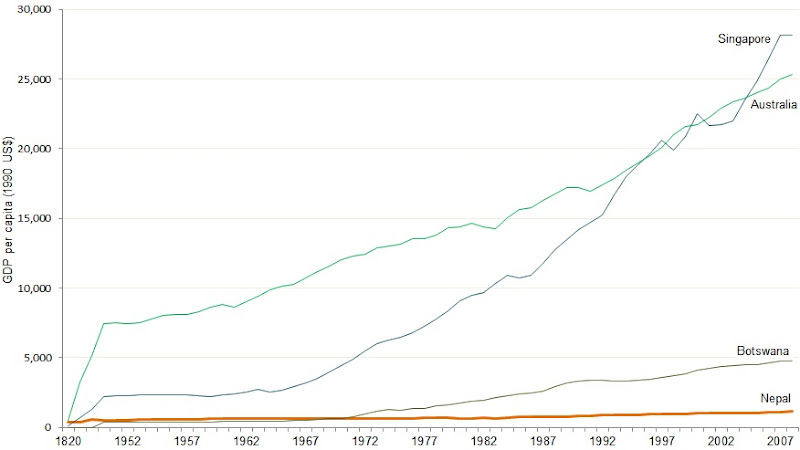 In short, nations like Nepal fail because of the continued supremacy of extractive political and economic institutions over pluralism and the freedom to engage in productive activities without fear of expropriation and extortion. Extractive economic institutions are the practices and policies that are designed to extract incomes and wealth for the benefit of few elites at the expense of ordinary citizens. Some of these are insecure private property rights, expropriation of returns to investment, unfriendly labor regulations, uncompetitive practices, and imprudent macroeconomic management such as high inflation and currency controls. These have stifled entrepreneurial spirit and dis-incentivized saving, investment and innovation. But they have helped rulers and elites concentrate power and wealth even at the cost of unrest, strife and civil war. The power holders are neglecting investment in basic public services such as education, innovation, technology, healthcare and infrastructure—the drivers of economic growth— and resisting reform because it threatens the power and wealth of the extractors. Even when there are institutional changes, the elites ensure that the new institutions are not pluralistic enough to challenge their hold on power and wealth. The vicious circles between extractive political and economic institutions has impeded economic growth and restricted pluralistic distribution of political power.

Both before and after the economy was liberalized, the same set of businesspersons, corporate houses and politicians has been tightly controlling economic activities, leading to suppression of creative destruction. Some of the examples include syndicates in transport sector, middlemen in agriculture, unruly and politically affiliated labor unions, macroeconomic imprudence for the benefit of party cadres, land and fertilizer capture, extralegal levies, control of telecom sector by elites until it was liberalized to initially benefit a select investors, and control of development projects by party associates, among others. Even though there were political changes, the ensuing institutions retained the core values of extraction. These were prevalent during and after the Rana regime, and in the decade long insurgency. Unfortunately, the same extractive practices and policies are given continuity after 2006.

Unless at critical junctures the drive to institutional change leads to inclusive institutions, the same elites and set of powerbrokers and power holders will continue to run the show in one way or the other—social scientists call it “iron law of oligarchy”. For instance, the extractive and repressive Rana regime was replaced in 1950 by a constitutional monarch, who was surrounded by sycophants and extractive institutions that morphed into a different form but still retained its extractive nature. The weak democratic movement and the nascent inclusive institutions threatened the power and playing field of the elites (oligarchs) and feudal order. This led to coup d'état in 1959 by former King Mahendra, who was supported by the very people making a living from the automatic gains from extractive institutions. King Mahendra ruled by an iron fist, subverted pluralism, and squelched inclusive institutions by promoting extractive political institutions that hovered around the palace. This in turn supported extractive economic institutions (limited land rights, debt-ridden state-owned institutions (SOEs), inefficient family-owned businesses and uncompetitive big private sector players), leading to a situation where the few benefited at the cost of many. Though the monarchy yielded executive powers to the democratically elected parliament after 1990, it retained the final say, either directly or indirectly, on crucial matters. This was challenged decisively during the decade long bloody civil war, during which period the former King Gyanendra usurped power and filled in most of the executive positions by the same set of people who were against instituting inclusive institutions and governance structure.

The cosmetic changes in institutions where ultimately the same set of leaders, elites and businesses usurp power and restrain march to prosperity if it affected their hold on wealth and power—leading to insignificant change in livelihoods—have been a hallmark of not only Nepal’s unsuccessful drive to prosperity, but also of fragile nations such as Zimbabwe, Sierra Leone, Myanmar, North Korea, Chad, Haiti, Liberia, Angola and Sudan. Though the intensity of extraction in Nepal is lesser than what is prevalent in other fragile nations, it has nevertheless affected the drive to attaining potential level of prosperity. Worse, it has enabled accumulation of power in the hands of the same people who presided over the gradual institutional changes during different critical junctures in our history. 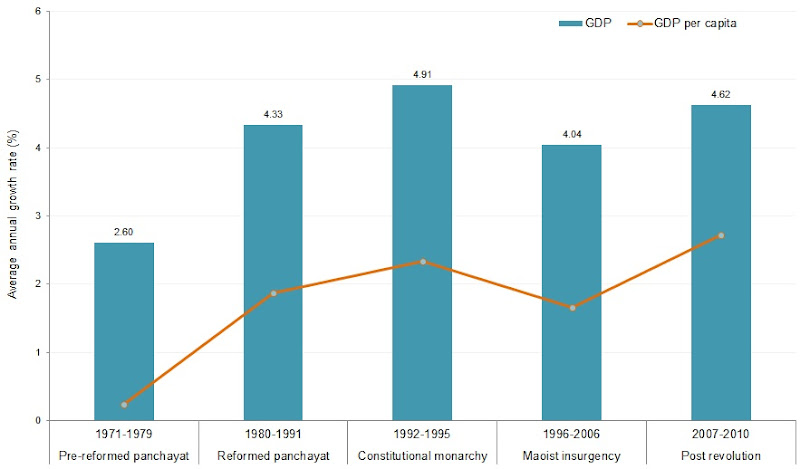 Now, you must be wondering that there has been economic growth, albeit below 5 percent, even in the presence of extractive institutions. Well, the powerbrokers and power holders allowed some growth to take place by making institutions partially inclusive to ensure their own survival in a changed context. For instance, though during the first and second waves of globalization (1870-1914 and 1945-1980 respectively) political and economic institutions did not wholly change in Nepal, they did change to some extent in select sectors to ensure the flow of income (from taxes and royalties) to extractors. The opening of agriculture and state-sanctioned manufacturing activities helped generate growth below 5 percent. That said the political sphere was tightly controlled by the elites manning Narayanhiti, Singha Durbar and various local level political authorities. The economic sphere was controlled by a handful of businesspersons who loathed open market and competition (think of the slew of bankrupt SOEs and monopoly power enjoyed by a few business houses) for fear of losing market power.

However, during the third wave of globalization (1980 onwards), a confluence of factors ranging from gradually developing momentum for global integration (think of the demand for imported goods, radio and television sets, vehicles, refrigerators, air and road connectivity among others) to the shifting general perception about pitfalls of a closed economy and the compulsion to tailor economic policies as per developments in the Indian economy led to a situation where the extractive institutions could not fully control rents and income as they wished. It spurred greater degree of economic activities than before, but not of the full potential. Creative destruction—which would result in further investment, efficient utilization of resources and innovation—was tightly controlled as is evident from the reluctance to open up lucrative sectors to private players and in reviving debt-ridden, bankrupt SOEs. Consequently, Nepal is experiencing less than potential growth rate under extractive institutions.

When there are persistent challenges to existing political and economic institutions, resulting in gradual unbinding of power from the elites’ hands, then institutions drift from one phase to another. These drifts arising from the emergence of critical junctures— “major events that disrupt the existing political and economic balance”—and the course taken by countries at that point in time determines their acceleration on the path to prosperity. The junctures are determined by a confluence of social, economic and political factors along with the existing opportunities and challenges brought about by changing context.

In England, the Black Death that killed almost half the population during the fourteenth century, the Glorious Revolution of 1688, and the opening of Atlantic trade resulted in a critical juncture for institutions to change. These events gradually empowered the public and forced the monarchy to cede executive power to the parliament, which in turn created a basis for the emergence of virtuous cycle between inclusive political and economic institutions. The result: Industrial Revolution in the eighteenth century and the envious rise in living standard and military might of Britain. Contrary to the British case, Zimbabwe went backwards when it reached critical juncture post-independence circa 1980, resulting in destitution and collapse of the once thriving economy.

In Nepal, we reached critical junctures in 1950, 1990 and 2006. In 1950 and 1990, the myopic vision of the elites and their penchant to stick to power along with the access to wealth that comes with it ensured continuity of extractive institutions in a bit concessionary terms (mainly due to the compulsion to liberalize the economy), resulting in growth and prosperity below potential. We missed two opportunities to create inclusive institutions. Lately, the successful political revolution in 2006 is leading to sweeping changes in division of power, decentralization, design of affirmative action, access to services, guarantee of rights, reservations and identity. However, there is a high chance that economically we could be either in the same or even in worse condition if these changes at this critical juncture are not matched with the creation and application of genuine inclusive economic and political institutions. As of now, we are starting with the same economic base and agents but with heightened apprehension over extraction of wealth and income in the pretext of ‘fair distribution’. It will stifle innovation, saving and investment. Furthermore, though political composition and structure are changing, the core extractive nature of political institutions is not. The same leaders who failed the Nepali people are still controlling and will likely control the political discourse and powerhouses in the federal set up. Worse, even the new leaders advocating pluralism might be unable and unwilling to change the way extractive political and economic institutions are functioning as they might get consumed by the allure of it while presiding over them at decisive moments.

Yes, if the central and state level leaders create genuinely inclusive political and economic institutions that lay the foundation for people to put their best abilities to action and benefit from it in terms of increased wealth and income. Else, even stronger economic turbulence will strike the nation and a few elites from all creed and background will hold power in their hands, benefiting financially at the cost of many people whose aspirations and expectations have skyrocketed lately. Creating inclusive institutions in name only will not suffice. It has to be implemented, which means ceding of control by existing extractors belonging to the elite political and economic section of our society, i.e. allowing creative destruction in both politics and business.

The fate of our prosperity lies not in our history, culture, geography (landlocked), or ignorance about the instruments of prosperity, but in our ability to create truly inclusive political and economic institutions. However, attempting to engineer prosperity without tackling the root causes will render fruitless any cosmetic changes in the structure of power and rule by any group of people.

Posted by Chandan Sapkota at 9:08 AM 3 comments: